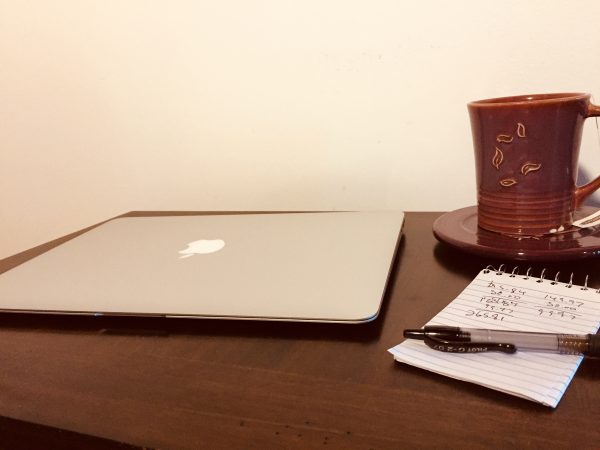 So I wanted to tell you all how my Apple GiveBack laptop trade-in went, because it turned out to be a MODERATELY FRUSTRATING PROCESS!

I put in my Apple GiveBack request on August 29, the same day I ordered my new MacBook Air. (Although you can initiate an Apple GiveBack request any time you want, when you buy a new device they’ll ask you if you want to trade in your old one.) The GiveBack form asked me a few questions about the state of my old MacBook Air — does it work, do you still have all the power cords, etc. — and then told me my estimated trade-in refund was $175.

On August 31, I received an email stating that my Apple GiveBack trade-in had been initiated, and “our trade–in partner will soon be sending you a kit so you can easily return your current device.” The email also clarified that my estimated trade-in quote would be valid for fourteen days.

I received my new MacBook Air on Friday, September 7. I got the Apple GiveBack box a day or two earlier, but hadn’t touched it because I needed to wait until I could transfer my files from my old laptop to my new one. I got the majority of the files transferred that evening, but didn’t complete the process until the next Monday because I had some issues with my Steam saved game files and had to contact customer service to figure out where they were located and how to get my new Steam install to recognize them. (Unrelated but kinda totally related: I hate that Macs have all of those hidden file directories. I want to see all the files on my computer AND all the directories that lead me to those files! Don’t hide an entire library behind a tilde!)

Then I didn’t get the laptop packed up until the next Saturday, September 15, because I had stuff to do almost every evening that week.

On Monday, September 17, Apple sent me an email asking if I was still interested in doing Apple GiveBack. By that point my laptop had been prepped and packed and in the UPS box for two days, but UPS wouldn’t pick it up until 5:30 that evening (they don’t do weekends at that box), so it makes sense that Apple and its trade-in partner — who finally got a name in this email, they’re called Phobio — would still be curious.

On Friday, September 21, I received the following email from Apple:

Because we didn’t receive your device within the required time frame, your trade-in has been canceled. If you already sent your device to our trade-in partner, it will be shipped back to you.

Fourteen days from August 31 (which is when I first heard about the fourteen-day deadline, which I also forgot about) is either September 13 or September 14 depending on how you count days, so it looks like they gave me a nice grace period. BUT ALSO the laptop had been with UPS for five days at that point, so WHY DIDN’T APPLE’S TRADE-IN PARTNER HAVE IT and WERE THEY GOING TO SEND IT BACK and AUGERHYHBH THIS IS ANNOYING.

The next day — September 22 — I got another email from Apple telling me my trade-in had been received, and Phobio had determined its value to be $65. They cut $110 off the estimated trade-in value because the laptop apparently had a broken hinge. I hadn’t noticed any broken hinge; I’m the honest type who would have for-sure mentioned it in the trade-in questionnaire. Still, it must have had one, and it made the laptop $110 less valuable.

I had 14 days to accept the new trade-in value. I accepted it immediately.

Apple then told me that my trade-in might appear on my credit card statement and it might arrive in the form of an Apple Gift Card, and although the very first trade-in email clarified that people who did a trade-in after buying a new Apple product would receive their money as a credit card refund, this subsequent email did not offer that explanation and instead left me to wonder HOW I WOULD GET MY MONEY, since, of course, I had long archived that initial email.

This morning, I got confirmation that Apple had refunded my credit card $69.55. No idea where the extra $4.55 came from. Maybe the hinge wasn’t as broken as Apple’s trade-in partner thought.

1. We Did Good, Billfold
2. Question Wednesday
3. What I Learned From Five Years of Writing and Editing for The Billfold
4. How a Program Assistant Dealing With a New Paycheck System Does Money
5. Classic Billfold: What I Wanted From My Move to Portland and What I Got
applehow could the hinge have been broken the laptop opened and closed just finerefundsshopping