Tallying Up My August Grocery Spending 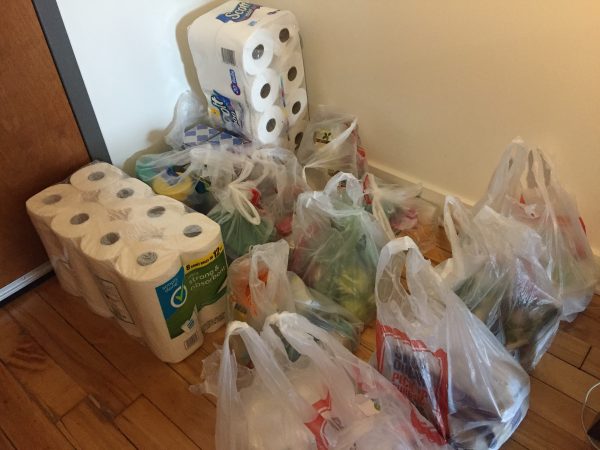 I didn’t think to take a photo of August’s Hy-Vee haul, so here’s the $190.26 I spent on Hy-Vee groceries and toiletries for September.

I’m so glad you all suggested that we keep track of our August grocery spending, and I’m going to be sharing a few more grocery features over the next week or so — but here’s mine, in case you were curious. (Like many of you, I’m curious to see how my spending compares to everyone else’s!)

First, let’s go over what I eat in a day:

I’m one of those people who doesn’t mind eating the same stuff every day — in fact, I prefer it — and since I’m only cooking for myself, it’s very easy for me to meal plan. Before I do my monthly Hy-Vee order, I count up how many dinners I’ll need and make sure I buy enough tofu, quinoa, etc. to cover those meals (plus a few extra meals just in case). I have a Huel subscription, so that comes automatically, and I toss in some extra apples for snacks and the rare evening when I’m still hungry even after dinner.

I buy some fresh fruits (apples/bananas) and fresh vegetables, but most of my fruit/veg comes frozen. I buy store brand as much as possible; the tortillas are from Mission and PB2 is of course PB2, but pretty much everything else, from quinoa to blueberries, is Hy-Vee’s brand.

I will buy the occasional treat or snack (like the $3 I spent on edible cookie dough earlier this month) but rarely eat at restaurants; when I lived in Seattle I’d occasionally order from Eat24, but Cedar Rapids doesn’t have that, so I haven’t ordered takeout once since I moved.

Happy to answer additional questions about my eating habits in the comments. Let’s move on to the numbers!

On August 7, I ordered $17.90 worth of toiletries (lipstick, hair spray, a new comb to replace a broken one) from CVS. I could probably leave that off the list since it isn’t food, but I track groceries/toiletries on the same line in Mint, so here it is.

On August 9, I spent $20.99 on two tubs of PB2 from Amazon. I’d decided to try PB2 this past month and went through my first tub (which was part of my Hy-Vee order) in under two weeks. I thought about walking or biking to Hy-Vee to pick up a few more tubs, but ordered through Amazon since it was too hot and muggy out. It would have been cheaper to buy the PB2 at Hy-Vee; I spent an extra dollar per tub for this convenience.

On August 26, I spent $15.99 on three more boxes of tea, because I didn’t count the remaining teabags in my cupboard before putting in my Celestial Seasonings order. (I had plenty of herbal tea, but hadn’t ordered enough black tea.) I bought this tea through Amazon instead of Celestial Seasonings so I wouldn’t have to pay for shipping. The boxes that arrived were rotten, and I know that you’re going to tell me that “rotten tea” isn’t a thing, but these boxes were all days away from their “best-by date” and the tea smelled like mold and scented candles. I threw them in the trash.

1. We Did Good, Billfold
2. Question Wednesday
3. What I Learned From Five Years of Writing and Editing for The Billfold
4. How a Program Assistant Dealing With a New Paycheck System Does Money
5. Classic Billfold: What I Wanted From My Move to Portland and What I Got
foodgotta get that gram of protein per pound of bodyweight per daygrocery budgetmeal-planning