Roadside Redemption: Earning Money By Picking Up Bottles and Cans 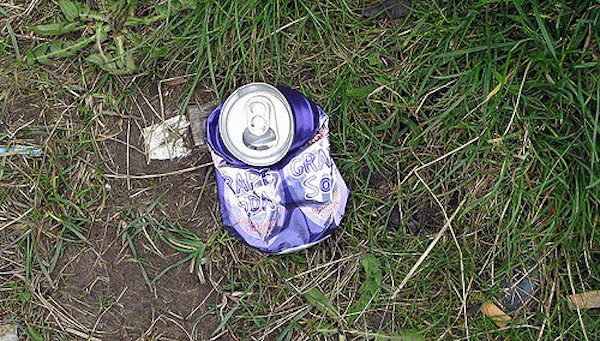 I’m attracted to shiny things. If I see money lying around, I pick it up. Even pennies. Call me a magpie. And since I generally cycle between twenty and thirty miles in the course of a day, there’s plenty of road to scout for change. Most of it is coins. Rarely, maybe once every two months, it’s a bill. But by far, the vast majority of money I come across is in the form of nickel deposit bottles and cans.

In the abstract, I understood that this litter represented dollars – but it always seemed too much trouble to collect it and turn it in. Sure, both Berkeley and San Francisco have some heavily littered areas, but overall they’re both fairly clean cities. Berkeley was the first city in the nation to offer curbside recycling. San Francisco hosted a global climate summit in September. Both cities have the ambitious goal of zero waste by 2020. So with all that press on environmental accountability, I figured the cities had probably figured roadside litter out, or would shortly. Even if there were occasionally a few bottles and cans in the gutter, someone else would get them.

And, as a reason if not an excuse, once I leave my block there’s only so much litter I have the will to pick up. That might make me sound like a callous, anti-environment, pro-greenhouse gas, tree mugger. But the reality is that I live in a city of 120,000 people, in a metro area of more than 7 million. There’s always going to be more trash. No one wants to live someplace dirty, but I already compost, garden, canvass for charity, and worked out how to limit both the financial and environmental burden of my own death. I don’t mean to exercise moral excusal here — “haven’t I done enough??” — but I also don’t want to be unavailable elsewhere because I burned out on trash removal trying to single-handedly beautify both sides of the bay myself. Especially when no one asked me to help. I’ve only got so much emotional bandwidth, and compassion fatigue is real.

Yet I also understand that recycling is a big business, an approximately $200 billion one globally. And, living in an urban area, I quite frequently see independent recyclers picking up street litter and sorting through trash for the higher value goods.

Who are these independent recyclers? As in many urban areas, in the Bay Area recycling is something of a cottage industry, with many players operating outside the influence of municipal sanitation services. Although where I live most of the recyclers are homeless individuals, where I work most of the recyclers are retirees. There are also a fair number of contractors in both cities who run small businesses collecting glass and paper goods in flatbed trucks.

That robust local industry seemed plenty of evidence that it is financially worth it to sort recycling — or at the very least worth it for me to start picking up those bottles and cans I’d just been blowing by. But could it really be enough to put a dent in personal expenses? How did all those folk make it work?

I thought I’d perform a small personal challenge to find out. For a month I would pick up every single nickel deposit I saw littering the street. This appealed to my sense of thrift and my sense of social responsibility. I could reasonably feel good about doing my part to help both Berkeley and San Francisco achieve their goal of zero waste while getting a little back on the side.

However, the challenge also gave a good sticking to my sense of liberal guilt, which told me that by picking up and redeeming those nickel deposits myself, I was stealing money from independent businesses, retirees, and the homeless. In other words, depriving people of their livelihoods. Stealing their work, when I have other options available. How was I going to fall asleep at night thinking that?

So I came up with a few rules. While it was fine to go through my own recycling bin for deposits, I would not go through anyone else’s. I would only pick up litter from the street. Any and all nickel deposits, no matter where they were located, no matter their state. If they were in a heavy traffic area, I would just wait for the traffic to clear before scraping them up off the road. I could feel fine about that, since I knew few retirees willing to risk getting crushed by a bus so they could get a nickel from a flattened Coca-Cola bottle.

The results were surprising. Since I work in the financial district of San Francisco, there was no shortage of plastic and aluminum soft drink cans and bottles mashed into the pavement. In Berkeley, it was different. There wasn’t much in the way of deposits, but once I started looking at the trash people left out, I noticed there were actually quite a lot of books — free range literature — which could be gathered and sold. One of the local used book stores would take any and all of them. What they couldn’t resell, they would pay a few pennies on the pound for to recycle as scrap. So, a week into the experiment, I expanded to picking up books as well.

After 30 days,  I’d collected $113.60 from nickel deposits and resold books. That figure breaks down to $40.25 for books and $73.35 in bottles and cans. Translated, that makes 1,467 nickel deposits, or a little under 50 bottles and cans a day. I now felt I had a better grasp of how someone on a fixed income could reasonably expect a decent revenue stream by sorting metal from glass, and paper from plastic. I also had some serious doubts about either city’s ability to make good on that promise of zero waste by 2020.

As for what to do with that collected money, rather than do something sensible with it like an IRA, or something bland like quarterly taxes, I decided to use the collected revenue as a “feel good” fund — money for things requiring no further justification than their ability to improve my mood. Purchases made on account of “because.” Plants for the garden, a new chef’s knife for the kitchen, fancy pastries at the Hungarian bakery. Little rewards for having done my part to edge two cities nearer their sanitation goals. Happy to have helped.

1. We Did Good, Billfold
2. Question Wednesday
3. What I Learned From Five Years of Writing and Editing for The Billfold
4. How a Program Assistant Dealing With a New Paycheck System Does Money
5. Classic Billfold: What I Wanted From My Move to Portland and What I Got
bottles and cans just clap your handsrecyclingside hustles