Who Gives to Charity? 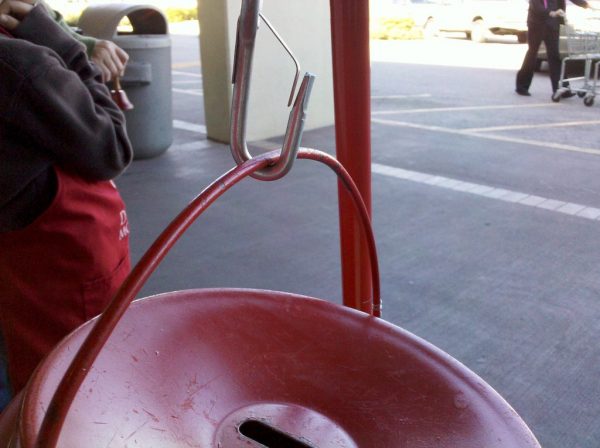 I work as a courier, which means my professional attire consists of shorts, a cycling jersey, and a canvas cargo bag the size of a mini-fridge. I work two shifts a day for two very different companies. From the mornings to mid-afternoon I ride around the 7X7 grid of San Francisco, delivering parcels, packages, and luxury goods. Then at 4 pm I clock out to start my second job, picking up leftovers from downtown restaurants, cafes, and tech companies and bringing the donated food to homeless shelters.

In the morning, I like the physical challenge of transporting amplifiers up Nob Hill. And in the afternoons, I like being able to brighten the day of the folk at the shelter when I roll up with a couple of jugs of donated coffee and three trays worth of bacon.

For the month of December, I decided to try an experiment. I didn’t accept tips, but collected money for charities instead. This past year’s election left me concerned for the well-being of programs that provide free health and social services and which receive some level of federal assistance. Switching from collecting tips to collecting for charity seemed an easy way to do something constructive with my concerns. I put a large sign on the back of my pack reading ‘Charity Ride’ and on the sides, two separate cansne for the San Francisco AIDS Foundation, and the other for The American Indian College Fund.

The response was overwhelmingly positive. During morning shifts, as I huffed up Nob Hill again for another delivery to the Intercontinental Hotel, guests and doormen would see the pack, read the signs, and tell me how much good work I was doing. Or again as I sped down Mission to a law office, I’d lock up, run inside for the handoff and get a thumbs up from the receptionist. All that month, throughout the financial offices and tech firms of San Francisco, I was greeted with pats on the back and cries of “great job!” By the end of December I had made $17 in tips.

Then during the afternoon, as I loaded up leftovers from cafes off the Embarcadero, baristas pulled out a few bucks from their own tip jars. Then as I wheeled past the other bike messengers gathered around the Montgomery steps, they put in some change. And as I rolled my bike into the different homeless shelters, rehab clinics, and subsidized housing, the residents of those places pulled out worn and tattered bills. Sometimes pedestrians would stop and put in some money too. And by the end of December, from baristas, bike messengers, pedestrians, and the residents of a homeless shelter, I had collected $240.55.

I was shocked. I hadn’t changed how much I rode or where. And I hadn’t directly asked anyone for money. But I was stunned that I had collected $223.55 more from other service workers (and a few homeless people as well) than from the office workers and finance clerks who make up around 90% of my customer base, whose contribution for the entire month was $17 total.

To be fair, I can’t know anyone else’s life. I think people give what they’re ready to. As for the office crowd that I meet in the morning shift, they, like me, are on the job and in a hurry and they have other things on their mind. Some service professions get tipped, and others don’t, and I work in one that mostly doesn’t.

As for why the afternoon group gave so much more, I have a few guesses. While the morning shift is an on-demand service, the afternoon shift works like a paper route. I see the same people every day, and some people may feel more inclined to give to someone they have an ongoing familiarity with. It could also be since I mostly pick up from the restaurants and cafes after they’ve closed for the day, the staff is less hurried. Not being pressed for time means being more available to altruism. Think about this in your own life this way: are you more likely to give money to a homeless person when you’re running late for a meeting? Or when you’ve got some time on your hands?

But could how much people give be in any way related to how much money they make? I asked a bell ringer for the Salvation Army — probably America’s most famous charity campaign. She was standing outside of Bloomingdales, so on my last run to the shelter I dropped a few coins in that universally recognizable red bucket and asked if it would be OK to ask her a few questions. She agreed, and told me that in an eight hour shift outside Bloomingdales she raises about $50 to $60 in change and small bills. Which sounds great, except that for the same shift outside Macy’s she makes $80 to $100.

I really don’t know much about the demographics of Macy’s shoppers versus Bloomingdales shoppers besides what I learned in a quick search for ‘denim jeans’ on the Bloomingdales website (top result: $139) and Macys.com (top result: $59.50). Which means, taken with the bell ringer’s testament, that the people who shop at Macy’s are either thriftier or not as well off as the people who shop at Bloomingdales. And yet, Macy’s shoppers give almost twice as much. That information lined up neatly with my own observations. I go a lot of praise for my own campaign — the office crowd was very generous with their praise — but it was service workers who actually pulled out their wallets.

All these observations seemed in accord with a suspicion I’ve long had: that those who rely on social services, or are in the same bracket as those who do, are more likely to give and to give more often than those outside that bracket.

Or to say it more simply, the people who have the most to lose are also the most likely to give.

It might just be easier to have financial empathy when you know what it feels like to be strapped.

1. We Did Good, Billfold
2. Question Wednesday
3. What I Learned From Five Years of Writing and Editing for The Billfold
4. How a Program Assistant Dealing With a New Paycheck System Does Money
5. Classic Billfold: What I Wanted From My Move to Portland and What I Got
charityhomelesssan-francisco