Saved by the Penny Jar 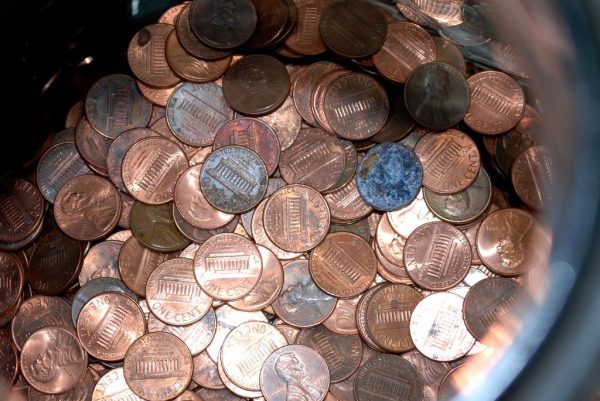 When you make more money, you owe more money. It’s a basic rule for the self-employed, but one that I had completely forgotten when I filed my taxes this year.

Oh, I knew that I would owe, but I felt prepared. I had saved about $2.5k for my taxes when I used a free consultation service at the local library and filed at the beginning of March.

But I was in for a shock. For the first time in my adult life I had made more than $25k in a year. That should have been good news. Though it meant that between state and federal, I owed $5,587 in taxes. Which meant my savings were three thousand dollars short. How had I so miscalculated?

I had paid $7,700 to the University of California. I had paid off $2,000 in debt to my parents. And I had $600 worth of dental work done in 2016. I know, I know, I could have avoided this by filing taxes quarterly — as has frequently been advised — but I have this horrible nagging fear of paying the IRS every three months only to have them turn around and whack me again in April. (“You mean you thought all along that you were filing? We just thought you liked us.”) Taxes are like wisdom teeth. Painful to have pulled, yes, but still best to just get them all out at once.

So I recognize that I am thoroughly at fault here. But all that self-awareness didn’t solve that I was still $3,000 in the hole on what I owed. I had to strategize and fast.

The first thing was to start paying everything by credit card. (The next bill wouldn’t be due until May 5th, well after tax day) Then I signed up for additional shifts at work. (Show up early, stay late, work evenings). The third order of business was to pitch any and every possible story idea. (Such as a piece about where Oaklanders could get free tax preparation services)

Then there were other necessary measures. A local clinic is looking for paid volunteers for blood work? Sign me up! There are more than thirty books on the shelf that I still haven’t read? Sell them! Besides, I live three blocks from a library. And what about all those beautiful and obsolete film cameras that sit there collecting dust? The world’s moved on to digital! SELL!

And by the weekend before April 18th, at the end of all that hustling, blood letting, and liquidation, I was still $6.73 short of what I owed to the IRS.

That’s when I remembered the penny jar.

I never know what to do with pennies. Leaving them as a tip just seems insulting, and the metro ticket machines won’t take them. So they pile up, first in my pocket, and then in a jar on my dresser.

I dumped them all out and packed them in rolls of fifty cents each. I noticed the mint date on one as I rolled them up. Nineteen fifty four. That coin had been travelling for 63 years, through pockets, palms, and piggy banks, exactly to this moment so that I could pay off Uncle Sam, on time and in full.

All told there was $13.58 in pocket change. A $6.85 surplus. The final few dollars I needed with enough left over to buy myself a piece of toast. Saved by the penny jar.

A caveat: there were a few other coins in the jar besides pennies, but the vast majority were one cent pieces. So I maintain it was the penny that saved me. It was, indisputably, among the penny’s finest hours.

And to think some people want to get rid of them.

1. We Did Good, Billfold
2. Question Wednesday
3. What I Learned From Five Years of Writing and Editing for The Billfold
4. How a Program Assistant Dealing With a New Paycheck System Does Money
5. Classic Billfold: What I Wanted From My Move to Portland and What I Got
moneytax-seriestaxes