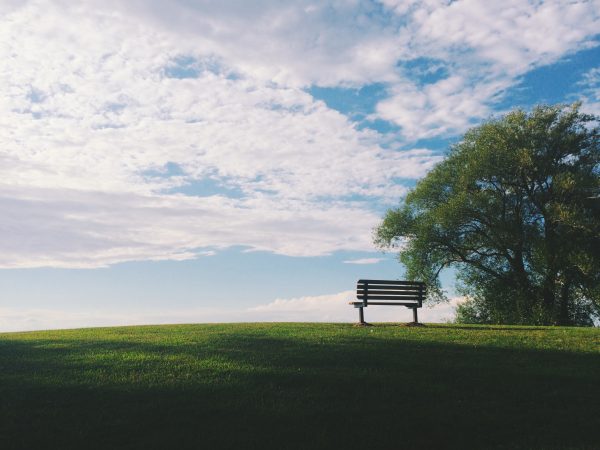 Photo by Noah Silliman on Unsplash.

This is perhaps the closest I’ll get to speaking from beyond the grave: my phone, set to speaker mode, cutting through the silence in my apartment as I talk about postmortem arrangements with a funeral home employee.

“It’s so good when people are able to tell me what they want because it’s usually after they die, and people just have to guess what they wanted,” says the employee on the other end of the phone.

So goes the process for planning my own funeral.

No, I’m not imminently dying, as far as I know. I have no macabre obsessions. I’m just a planner. Whether I die five minutes from now or in 100 years, I don’t want the people left behind — perhaps in an emotional state — to guess what sort of funeral I wanted. So here I am, talking with a funeral home in Atlanta about what I want to happen after I’m gone.

Planning for a funeral is a complex affair that involves budgeting, finding a funeral home, choosing a cemetery, and figuring out the myriad other details involved in the aftermath of a life completed. My husband wasn’t surprised by my undertaking. We’ve been together for years, so he has become used to my unflinching practicality. My friends are different. After their uneasy laughs subside, a natural question arises: Why does a healthy woman in her mid-20s want to plan her funeral? It’s something I’ve been asking myself a lot during the process.

Like almost every human ever, I don’t look forward to death — but my ever-pragmatic nature says that reluctance won’t make it any less likely. I mostly ignored that prospect until a few years ago, when I began reading about the funeral industry. It’s a fascinating but under-discussed business whose customers — a deceased person’s loved ones — tend to be at their lowest emotional point.

In my job as a journalist, one of my favorite topics to cover is death and its costs. Life isn’t cheap, and neither is dying. The 2017 national median cost of a funeral with viewing and burial was $7,360, according to the National Funeral Directors Association.

The best way to reduce those costs? Plan your funeral to make it easier on your loved ones, both emotionally and financially. I’ve written that sentiment in articles so many times that I’ve convinced myself to follow my own advice.

“Americans are neurotically afraid of even acknowledging their own death. This fear drives us to make last-minute choices in grief, to overspend and to wonder if we could have done something more meaningful,” Joshua Slocum, executive director of death industry watchdog Funeral Consumers Alliance, tells me in an email interview. “You’re among the few, especially at your age, to take this seriously.”

I’m planning my funeral because of people like Chanel Reynolds, who removed her husband’s life support after he was in an accident. After dealing with that, she still had to plan a funeral.

“I was nowhere near the end of the decisions that needed to be made, and the first thing was picking a funeral home, which I’d never even thought about before,” says Reynolds, co-founder of Get Your Shit Together, which she describes as a list of everything she should have done before her husband’s death. “You have to make decisions quickly, and it’s exactly at your lowest, worst moment when you’re least capable of making new decisions quickly. It was the worst possible time.”

That’s exactly what I want my loved ones to avoid. At their worst moment, I don’t want them to have to worry and wonder what the casket should be made out of or what’s an appropriate amount to spend.

Planning a funeral is like planning a wedding. You’re often coaxed into paying for the extras because, hey, it’s a once-in-a-lifetime event. (Unlike weddings, that statement holds true for death.) There are many choices to make. When do you want a ceremony? Do you want a ceremony at all? Should the body be embalmed? Cremation or burial? Inundated in options, I quickly realized why religions have funeral traditions: so you don’t have to make as many decisions when the time comes.

After much research, I decided that I didn’t want to stray far from my Jewish roots. That means a wooden coffin so I fully decompose into the earth. Burial, not cremation. No viewing of the body. Burial done within two days of death. No embalming because it’s a rough way to treat a body. Plus, those chemicals (which include the carcinogenic formaldehyde) end up seeping into the ground.

If I was already gone, how would loved ones know these preferences?

That brings me to another reason for planning my funeral: I want to have a say in what happens to my body after death. I don’t want a funeral director to talk my family into post-death preparations that I wouldn’t want, such as embalming. This is my body, and I don’t want a stranger to tell my relatives what to do with it.

After I had an idea of what I wanted, I chose a funeral home. That part was easier than I expected, thanks to a consumer organization called the Memorial Society of Georgia, affiliated with the Funeral Consumers Alliance. For a one-time fee of $35, members get discounted services from partner funeral homes. (The fee varies based on the state, but they all appear reasonable.) I called a partner funeral home close to me, Fischer Funeral Care, and the woman there assured me that yes, it really is a good idea for me to plan my funeral.

Finding the cemetery was trickier. Green cemeteries, which do not allow embalmed bodies, maintain an expanse of fields or forest instead of traditional gravestones. I find this natural setting an appealing place for my body to spend eternity. (Or at least until it decomposes.)

One of the more surprising realizations during the funeral planning process was that it wasn’t all about me. I had to talk with my husband about what he wanted, too. We had already discussed burial together (doesn’t every newly-married couple?), but that is a general decision. Planning a funeral requires specifics. Choosing a cemetery necessitated his involvement because it would also be his burial place, and my traditional-leaning husband had to consider whether he liked the idea of a green cemetery.

While my (ever-patient) husband mulled over burial options, I called two nearby green cemeteries. I didn’t want to use the first one because it was owned by a single person, and I worried what would happen to the cemetery after that owner’s death.

The second cemetery, Honey Creek Woodlands, is owned and operated by a monastery, so I was less worried about it going anywhere in the immediate future. Its woods and streams looked calming. “It should feel like a state park and you’re hiking around and then you see a grave,” a man at Honey Creek told me over the phone. Good marketing.

I started to feel more comfortable discussing my funeral, like I’m describing the features of a house — open spaces, natural feeling. I suppose a home and a grave are both resting places.

For comparison purposes, I also contacted a traditional cemetery. I didn’t like that it required a vault, a sealed outer receptacle that holds the casket. It was another layer between my body and the earth.

I presented my findings to my husband on the attributes and prices of each cemetery. The costs were nearly identical. He agreed to a green cemetery in a very existential way that I find somewhat charming — “If I’m dead, I won’t care what happens to my body anyway” — so we chose Honey Creek.

Reynolds provided ideas for a ceremony. Some people have a party. Some people wait a year for the service to allow family time to gather. Others have a living funeral, which is when your friends and family get together while you’re still alive to celebrate you.

Initially, I gravitated toward skipping the graveside service, opting to do a ceremony a few months later so people could have time to plan travel. But my husband balked. He couldn’t imagine not seeing me off. Once again, I was reminded that my funeral isn’t all about me. I won’t be there, so it’s really about what will comfort my loved ones.

After talking with my husband, my most likely survivor, we decided that in addition to a graveside service, we’ll hold a remembrance dinner three months after my death. That’ll give my family time to get together, and once they gather, they can have a good time, eat something delicious and reflect on me (hopefully positively). I’ll even pay for the meal, posthumously.

Now for the bill. A Memorial Society membership costs $35. Fischer Funeral Care offers members a wooden coffin and embalming-free burial with a service for $2,495. At Honey Creek Woodlands, a pine forest burial costs $2,500. Opening and closing of the grave costs $700, and a marker stone with my name, birthday, and death date costs $200.

That’s a grand total of $5,930 — plus the dinner costs, which will depend on how many family members can attend. To compare, the 2017 national median cost of a viewing- and embalming-free funeral with burial costs $6,210, according to the National Funeral Directors Association.

As for how I’m going to pay for it, I’m taking Reynolds’ advice and making a funeral budget part of my emergency fund. “If something were to happen quickly, then you can always access some of that money,” she says. I won’t pre-pay any costs besides the Memorial Society membership. I don’t want my funeral wishes to be lost or forgotten in the postmortem scramble, so I’m making sure they’re available in a written will.

I’m a planner, so I feel relieved that I’ve taken care of another aspect of life — and just because this is my funeral plan now doesn’t mean it’s set in stone. (Okay, bad joke.) Funeral planning is a process, and I can amend my wishes as I go along. Circumstances will change. Perhaps a vendor will go out of business, or I’ll move, or I’ll decide that I don’t want a green cemetery.

This is a journey, and I’ll likely change my mind about what I want. That’s all right. Why should my death be any different than my life?

Adina Solomon is a freelance journalist based in Atlanta. She writes about a range of subjects in addition to death, including city design, food, business, and culture. You can find her at adinasolomon.com.

1. We Did Good, Billfold
2. Question Wednesday
3. What I Learned From Five Years of Writing and Editing for The Billfold
4. How a Program Assistant Dealing With a New Paycheck System Does Money
5. Classic Billfold: What I Wanted From My Move to Portland and What I Got
budgetingdeathfuneralplanning