On This New Game Show, the Winner Gets Their Student Loans Paid Off 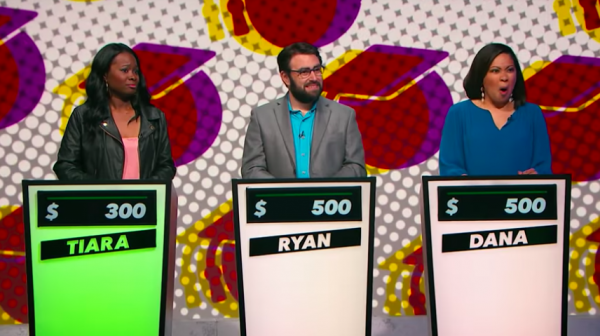 Paid Off premieres tonight on TruTV, and I have had multiple requests to discuss it on The Billfold, so HERE WE GO.

Student loan debt is out of control and comedian Michael Torpey (Orange is the New Black) has the foolish idea he can do something about it. Paid Off with Michael Torpey gives three lucky college grads – saddled with student debt – the chance to test the depth of their degrees in a fun, fast paced trivia gameshow. In the end, one lucky winner will get the chance to have their student debt wiped out.

The trailer, however, implies that contestants will be tested less on trivia than on their willingness to say “used condom” on — wait, is TruTV national television? Is it a channel? I haven’t owned a TV since 2005. Anyway, watch this and you’ll get the idea:

Part of me is like “well, I guess this is good for the people who get their loans paid off,” and the other part is all “but if this show is successful, we’re going to get a new show where people compete to erase their medical debt,” and then another other part is “well, is that a bad thing?” and then the remaining parts of me all shout “YES IT IS! We shouldn’t have to compete for things like that!” and then one tiny part of me whispers “but that’s how capitalism works.”

So. What do you think? I read Slate’s review, btw, which notes that Michael Torpey ends every episode with a variation of “Call your representatives right now and tell them we need a better solution than this game show,” the late-capitalist version of Bob Barker’s “Help control the pet population.” Knowing that the host of Paid Off wishes his game show didn’t exist doesn’t really make me feel better about the whole thing — but I’m curious how you all feel, and whether any of you are going to watch Paid Off and/or try to become a contestant.

1. We Did Good, Billfold
2. Question Wednesday
3. What I Learned From Five Years of Writing and Editing for The Billfold
4. How a Program Assistant Dealing With a New Paycheck System Does Money
5. Classic Billfold: What I Wanted From My Move to Portland and What I Got
game-showsideas that seem like they're good but make me feel really badstudent-debtstudent-loanstelevision