In Which I Get My First Chunk of Vanguard Advice 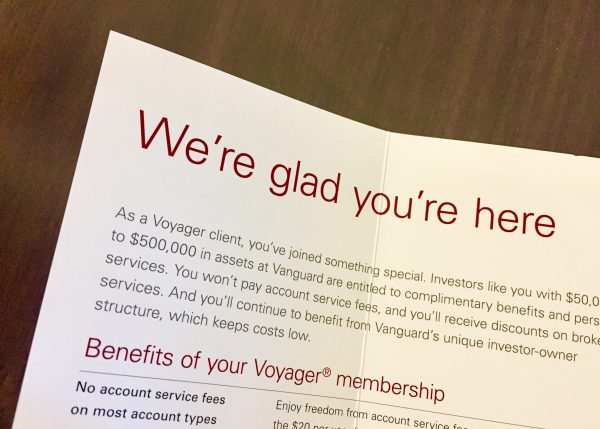 As you might remember, I just became a Vanguard Voyager Client — and yesterday, I had my first conversation with Vanguard Personal Advisor Services.

It was a great conversation, and if you’re eligible for Vanguard Personal Advisor Services I’d recommend going through the process even if you don’t plan on signing up with a financial advisor. (The initial discussion, which comes with a chunk of good advice, is free.)

The big question, in my case, was whether I was really on track for retirement. When I filled out that questionnaire earlier this week, Vanguard’s calculator told me I was doing just fine with the retirement savings I already had, assuming I continued to max out my traditional IRA each year.

At this point, I should probably recap my current retirement savings:

Why did the calculator think I was doing just fine, even though everyone else seems to be worried about not having enough for retirement? Because I was lucky enough to land a job that offered both a 403(b) and an employer match in my mid-20s. I got that job right before the Great Recession, which meant I was buying low — and even though I only stayed at that job for four years, and then spent another four years not contributing anything to my retirement, the math proves… well, I’ll let CNBC explain:

Someone who saves for retirement during their 20s and completely stops a decade later will have more at age 62 than someone who starts saving in their 30s and spends the rest of his or her adult life trying to catch up. Yes, 10 years of savings can be worth more than 30 years of savings. This may be the only time when something that sounds too good to be true really is true.

The other reason the calculator thought I was doing fine was because it asked me to estimate my living expenses after retirement, and since that is kind of an impossible question for a 36-year-old to answer, I told the calculator that I’d be living on what I’m spending now.

My Vanguard Personal Advisor wasn’t so sure.

Honestly, I agree. Even if I do maintain my current level of frugality, certain parts of life (housing, healthcare) may become more expensive. So we discussed, and my advisor suggested that I’d probably need a million dollars saved for retirement. To hit that goal, I’ll need to increase my retirement savings and open up a SEP IRA, since I won’t be able to retire a millionaire with traditional IRA contributions alone.

But where will those increased retirement savings come from? I’ve got my HSA, but my advisor said we couldn’t really count that money as “retirement savings” even though it can be used in retirement. Instead, my advisor advised me to stop making weekly contributions to my individual brokerage account. I should put that money, plus the $3,820.15 already in the account, towards retirement.

When I explained that I wanted to keep my brokerage account so I could turn my savings into a big pile of money, my advisor warned me that the pile might be smaller than expected, at least over the next 10 years. A recent Vanguard report explained that “investors should expect the nominal rate of return on their investments to be in the range of 3% to 5%, compared with historical averages of 9% to 11%,” and I was already aware of that because I’m up-to-date on my market news, but I’m not sure that’s a good enough reason to put that money into an IRA instead.

I’m going to have another call with this advisor next week, during which she’ll give me a customized investing plan and I’ll have the option to officially enroll in Vanguard Personal Advisor Services. This means I have two decisions to make: whether I should sign up for ongoing investment management, and whether I should turn my brokerage account into retirement savings.

What would you do?

1. We Did Good, Billfold
2. Question Wednesday
3. What I Learned From Five Years of Writing and Editing for The Billfold
4. How a Program Assistant Dealing With a New Paycheck System Does Money
5. Classic Billfold: What I Wanted From My Move to Portland and What I Got
investingretirement