The Cost of Wearing a Renaissance Uniform 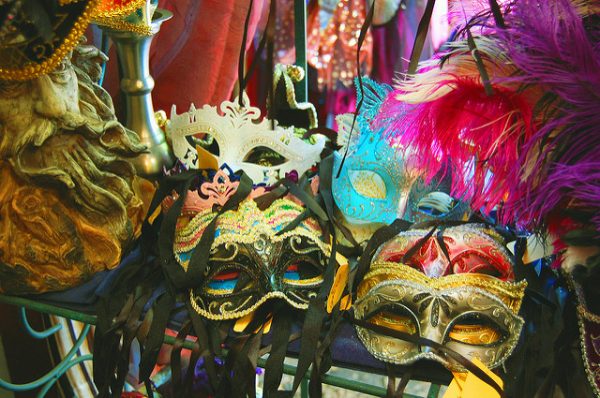 Whenever I found myself in a terrible job, I’d recall David Sedaris’ “Santaland Diaries.” I clung to his anecdotes detailing life as a Macy’s Christmas Elf while I washed dishes, scrubbed toilets, or texted “No problem!” to a nightmareish boss. If he endured this when he was thirty, I thought, I’m still under thirty and therefore in pretty good shape. It’s okay for me to be washing dishes/working in retail/interning at this point in my life.

That trick worked until I got a job at a Renaissance store.

I had recently moved to Southern California and was staying with my aunt and uncle until I had enough saved to get my own place. I applied to many different positions, mostly administrative and retail, and said yes to the first job offer I landed. This was a sales associate position at a Renaissance… well, “store” is the best way I can describe it.

This shop carried costumes: mostly corsets, Renaissance skirts, tiny hats, big billowy pirate blouses and thousands of steampunk trinkets. The entire store was decked out in floor-to-ceiling shelves that were packed with The Nightmare Before Christmas figurines, fairy paraphernalia, incense, and other “home décor” pieces that tourists and retirees browsed and never bought. The company made most of their profit at Renaissance festivals, which makes sense. Why they needed a storefront is beyond me, but I was happy to have a paycheck, even if it was a minimum wage (~$9/hour at the time) and part-time with the potential to become a full-time position.

It wasn’t until I was hired that I learned wearing a corset and skirt was mandatory during my shift, and I had to buy them myself. I was surprised to hear this, and my discomfort must’ve been visible because my boss busted out, “but it’s 10 percent off with our company discount!” Corsets and skirts ranged from $30 to several hundred dollars, so my goal was to buy the cheapest, least embarrassing corset and skirt combo I could find.

“Have fun with it!” egged on my boss, who was totally oblivious to my not having fun with it.

I chose a $30 black corset and $40 blue floor-length skirt, which came to approximately $63 (thank you, 10 percent discount). That was cash out of my paycheck for an outfit I would only ever wear inside the store.

The most significant, and perhaps most humiliating, part of wearing a corset is the fact that putting one on is a two-person job. It’s impossible to put on a corset on your own because it laces up from behind — and if it isn’t tied correctly, can get pretty uncomfortable. So, at the start of every shift, my boss spent 5-7 minutes tying up my twenty-seven-dollar-before-California-sales-tax corset. The first time she laced me up very tightly, with the intent to push up my chest. I thought of David Sedaris in that moment.

During my shift I had typical sales associate duties. I dusted the shelves, I ran the cash register, I swept — all in a corset and long pirate skirt. My boss used to have me walk to the bank in my corseted get-up so I could serve as a walking advertisement, which felt like pure torture. I’d put on my sunglasses, as some shred of a mask, and wait in line at Wells Fargo while people stared.

About one week into my new job, my boss asked me to start wearing makeup during my shift. When I told my boss that I was already wearing makeup, she explained, “No, I mean dark eye makeup. Wear some colors, some eyeliner, have fun with it!”

This is the only job I’ve had that required wearing heavy makeup. If I were working at Sephora or had any cosmetic-affiliated position, this request would make sense. Considering Renaissance-era women didn’t put on a smokey eye every day, I did not understand why wearing dark eye makeup was a necessary part of my job — but I headed to Walgreens and bought a smokey-eye kit, eyeliner, and mascara, at roughly $10 each.

With each week, my hatred for this position grew. I felt alone in my misery, as my coworkers were very into the steampunk thing and loved their corsets and accoutrements. We were encouraged to continue to buy more corsets and skirts, to “mix it up” every once in a while. Originally I planned to wait it out in hopes that the job would improve, but the thought of buying and hanging corset #2 in my closet lit a fire in me, and I made it my mission to find another job ASAP.

I eventually found a much better full-time retail job. I only worked in Renaissance hell for about a month, but it’s worth noting this was the most I’d ever spend on a uniform. Typically I worked 25-35 hours per week, which meant I made anywhere between $225-$315 before taxes. This job was also 30 minutes driving distance, which came to $10/day on gas. With the costume ($63), make-up ($30), and gas ($160), I spent at least $253 of my total income (a full week’s pay) just for the privilege of doing my job.

I’m very grateful my days of wearing corsets to Wells Fargo are behind me. I’ve promised myself to never wear a corset again, which is the type of promise that is easy to keep in 2018.

Becky Brown has a corset-free job in Seattle. She only goes to the bank in clothes of this decade and she is very content with that.

1. We Did Good, Billfold
2. Question Wednesday
3. What I Learned From Five Years of Writing and Editing for The Billfold
4. How a Program Assistant Dealing With a New Paycheck System Does Money
5. Classic Billfold: What I Wanted From My Move to Portland and What I Got
bad jobsclothing seriesjobsuniforms