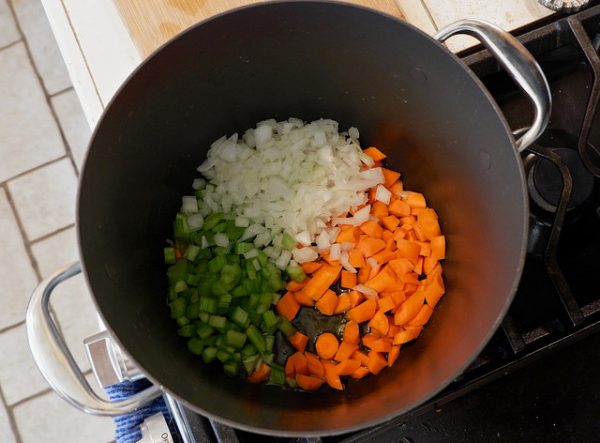 In my 20s, I fell in love with cooking. I’d just graduated college and moved in with my boyfriend. We were marooned in a tiny Texas town with negligible vegetarian options, and preparing elaborate meals seemed romantic, adult and absolutely necessary. I approached each meal as an opportunity to experiment, an excuse to create. I was not simply making dinner — I was making art! This belief may have stemmed from all the food blogs I was reading at the time, and the hope that I might avoid getting a real job if I photographed and blogged about every meal I ate in intricate detail.

Although my food blog didn’t take off, my credit card balance did. As it turns out, buying hard-to-find ingredients, making multiple trips to the grocery store each week, and constantly experimenting in the kitchen quickly adds up. But a girl’s gotta eat, so what could I do?

A decade later I finally got a real job, then took it a step further and got a budget. (Shout out to YNAB!) And then, like many (but not all!) Billfolders, I decided my grocery bill was a blight on my finances and desperately needed to be trimmed, much like the overpriced asparagus I bought each spring at the farmers’ market.

Always one to overthink things, I began researching cost-cutting strategies. For a few weeks, I packed elaborate mason jar salads for lunch, but eventually living on lettuce lost its luster. Next, I threw myself into weekend #foodprep, but wasting every Sunday in the kitchen was torture, especially after working all week. I tried big-batch cooking, figuring I could sacrifice one weekend for a month’s worth of meals, but quickly realized my freezer wasn’t nearly big enough to store seven frozen lasagnas. There had to be a better way, a method that would save time, money, space, and sanity.

As it turned out, the answer was right in front of me. Literally — we were eating it for dinner, and we could solve all our grocery-budget problems by eating it again tomorrow, in the time-honored tradition of leftovers.

I’ll be the first to admit it: leftovers aren’t sexy. They aren’t Instagrammable, no one writes elaborate blog posts documenting the process of reheating your sloppy seconds, and yesterday’s lentil soup is never going viral. Leftovers can, however, swoop in and save your budget, and they can do it without expending any extra effort or funds.

Since we embraced leftovers, our grocery bill hovers at around $400 a month for two active people who eat 99 percent of our meals at home. (Including coffee and snacks.) I cook roughly three to four times a week, planning my meals in advance and penciling in “leftovers” with freewheeling abandon.

I still love to experiment and try new recipes, but I no longer channel my inner Julia Child on a regular Tuesday. I save those marathon cooking sessions for the weekends, when I can measure ingredients and lovingly clip fresh herbs from the garden, stir a risotto for an hour and whip up a roux.

During the week, however, leftovers are my jam. A big pot of chili on Monday becomes Tuesday’s dinner, too. A pan of roasted vegetables is doubled and stretched for two or three days. If there’s not quite enough to make a full meal, I throw a fried egg on top and voila — dinner is served.

Whenever I go on and on about the miracle of leftovers, a well-meaning friend or acquaintance will say, “That’s great, but I could never eat the same thing two or three nights in a row. I’d get bored.”

And I get it, I do. I love food, and every now and then I’ll pull my Tupperwares out of the refrigerator and feel a twinge of resentment. But while the oven is preheating or the stew is coming to a simmer, I’ll remind myself that nourishment isn’t a form of entertainment; rather, it’s a necessity I happen to enjoy. The less time and money I spend feeding myself on a daily basis, the more I have to expend in other areas: reading books, walking my dog, working out, spending time with my family and friends.

At the end of the day, leftovers are more than a meal. They’re a ticket out of the kitchen and on to more exciting things, and I think we can all raise our forks to that.

Christine Hennessey is a fiction writer and marketing specialist who blogs about living on a budget at Better Than Never. She lives in North Carolina with her husband, 19 chickens, and one overweight dog, and is not above posting leftovers on Instagram.

1. We Did Good, Billfold
2. Question Wednesday
3. What I Learned From Five Years of Writing and Editing for The Billfold
4. How a Program Assistant Dealing With a New Paycheck System Does Money
5. Classic Billfold: What I Wanted From My Move to Portland and What I Got
cookingfoodfood seriesleftovers