A Friday Chat About Capsule Wardrobes 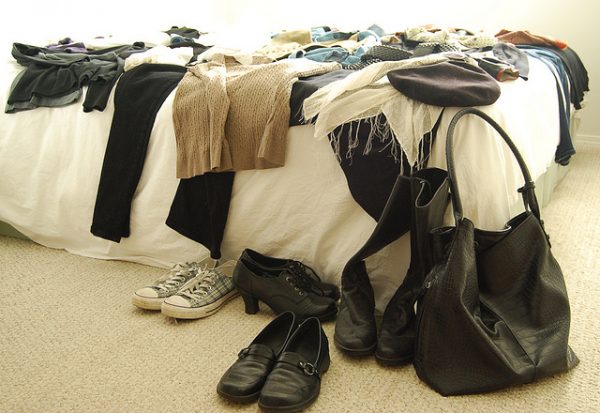 ANTHERIDIA: OMG. Nicole. Your books! They are SO GOOD! I think I read both of them within a weekend, which is no small feat considering I have a tiny human to keep alive 24/7.

NICOLE: Wow, thank you! I’m glad you enjoyed them, and also OMG a TINY HUMAN! How is that going?

ANTHERIDIA:  It’s going pretty well! I live in Canada, which means that I was fortunate enough to have a whole YEAR of paid parental leave. In fact, since my daughter was born, the time period has been increased to 18 months. You don’t get paid a lot, but it’s something! Anyway, I attribute most of my “success” as a parent to that.

NICOLE: Oh, Canada. I’m glad you had your year of leave. You mentioned when you emailed me about the chat that you recently went back to work?

ANTHERIDIA: That’s correct! I went back to work on May 7th, which meant I had just over a year at home with my daughter. This also means that I spent a whole year in some iteration of pajamas, leggings, terrible nursing clothes, or rags.

NICOLE: I have heard about the terrible nursing clothes. You’d think we’d have a better solution by now.

ANTHERIDIA: Right? It’s pretty awful. I invested in some solid lounge wear from a maternity store prior to giving birth, and then afterwards I supplemented with cheap stuff from Old Navy that I could lay around and breastfeed in.

NICOLE: None of which you can wear to work.

ANTHERIDIA: Not a chance! I work as a Project Manager within the environmental consulting industry, and my office has a “business casual” dress code. There is some flexibility on that, but given that I interact with clients on a regular basis, it’s better to err on the side of looking well put together.

NICOLE: So how did you handle the wardrobe transition? Did you drop a bunch of cash on new clothes? Or mix and match pre-pregnancy options and a new piece every few weeks?

ANTHERIDIA: I did a combination of the two: I went out and bought a bunch of items prior to my return, and now I am slowly supplementing as I go. Basically, I haven’t bought any new work-appropriate clothes in over two years (pregnancy + my year off), so I didn’t have much to work with. Like a lot of people, I have the tendency to purchase a lot of fast fashion from stores such as H&M, and those items aren’t known for their longevity. This is something I’m trying to get better at for sure!

I’m also in a situation now where I don’t have as much time to get dressed in the morning, so I wanted to make things easier on myself. I did a little bit of research online, and decided to move towards a modified capsule wardrobe.

NICOLE: Ooooh I love capsule wardrobes. What’s in yours?

ANTHERIDIA: So, I have two capsule wardrobes: one for work, and one for weekends. My work wardrobe contains 2 pairs of dress pants, 1 pair of jeans, 5 sleeveless tops, 5 short-sleeved blouses, and 5 long-sleeved blouses/sweaters. I also have 2 cardigans and 2 blazers. My weekend wardrobe contains 3 pairs of casual pants (jeans, leggings, and linen pants), 5 tank tops, 5 T-shirts, a flannel shirt, a couple of sweatshirts, and 2 cardigans.

NICOLE: I bet a lot of Billfolders are mentally tallying up their clothes right now. 😉 Your capsule wardrobe is larger than mine, for example, but I don’t need two sets of clothes for work and non-work.

ANTHERIDIA: Totally fair. I structured this around the weather, to an extent — if it’s a hot week, I want to be able to wear sleeveless tops every day to work, so I figured five was a good number. I should also note that my weekend wardrobe makes it to work every now and again on Casual Fridays.

I thought about doing a uniform, or a traditional capsule wardrobe, but I wanted to have a little more variety and a few more pieces so that I’m not doing laundry every other day.

NICOLE: Do you worry that you’re repeating work outfit components too often? When I worked in an office I tried to make sure I didn’t wear the same thing within two weeks, but that could have been just me.

ANTHERIDIA: That’s an interesting question. My answer is no, and that’s related to two things: 1) Having a child has made me less focused on my own appearance, and 2) As I’ve gotten older, I’ve noticed that people don’t care about other people very much. That’s sounds dramatic, but what I’m getting at is that we’re all so self-focused a lot of the time that we don’t really pay attention to things such as the nuances of another person’s wardrobe. I think we all worry that everyone around us is judging what we wear and how we look, but in reality, everyone is too busy thinking about how THEY look and worrying about whether people are judging them!

The other thing that helps is that I’ve tried to keep my work clothes within a monochromatic palette so that everything matches, so I think it’s hard for people to tell if you actually have five pairs of black pants or just one.

NICOLE: VERY TRUE. Well, I don’t want to keep you for too long, so I’ll end with this (and I bet you saw this question coming): what capsule-wardrobe-creation advice do you have for Billfold readers!

ANTHERIDIA: I would tell people to do some research into capsule wardrobes online, but in the end, do what works for you. I found it too bland and too much work to stick with a wardrobe of only ten pieces, so I expanded this to suit my needs while also capping the total numbers of clothing items that I have. You make the rules!

NICOLE: Wait, I have a bonus question: how much did it all cost?

ANTHERIDIA: I spent approximately $350 on a variety of sleeveless blouses, short-sleeve blouses, tank tops, and cardigans. I was able to re-use dress pants and jeans from before I got pregnant, but my plan is to replace these in the future. I also need to purchase a few more long-sleeved shirts, but I’m waiting until the fall when stores change their selection. I still haven’t moved fully towards higher quality pieces — most of those clothes came from Old Navy and a Canadian department store called Simon’s, but Rome wasn’t built in a day!

1. We Did Good, Billfold
2. Question Wednesday
3. What I Learned From Five Years of Writing and Editing for The Billfold
4. How a Program Assistant Dealing With a New Paycheck System Does Money
5. Classic Billfold: What I Wanted From My Move to Portland and What I Got
canadacapsule-wardrobechatsclothingclothing seriesFriday chatmaternity-leaveparenting