Why My Pickle Hobby Never Became a Side Hustle 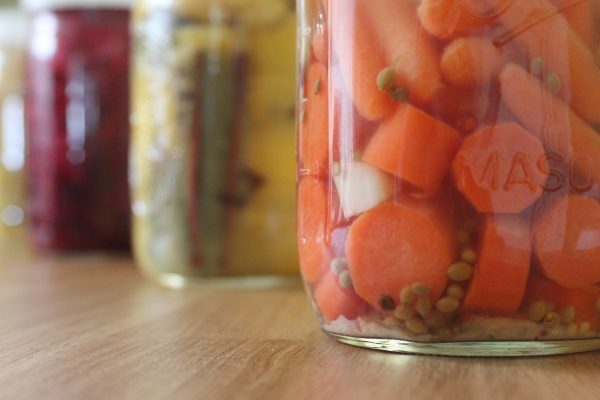 When you hear “this should be your side gig” often enough, it’s hard not to entertain the possibility. For me, the side hustle in question was pickled vegetables: cabbage, turnips, celery, radishes and (fan-favorite) carrots fermented in brine with garlic, spices, chiles, and other tidbits of deliciousness. I would take a jar to a potluck or open one up as an easy nosh for game night, and our friends would crunch away happily and tell me they wished I sold them at the Farmers’ Market. “If I ever quit this job, I can fall back on the pickles” started out as a standing joke, but, four years into a life-consuming job in a career I was increasingly skeptical of, the pickle option was looking more and more appealing. When I decided to walk away from that career and try a turn at freelancing, the first side hustle on my list was the frequently-joked-about pickle stand.

I can’t remember precisely when I decided I wanted to spend my free time fermenting everything in sight. The seeds were there in graduate school when I spent weeks nurturing wild sourdough starters and made at least one good batch of vinegar before the mother died. My interest was certainly boosted by conversations with a friend of mine — a working artist in a nearby town — who gave me part of his grandmother’s remarkable sourdough starter (she carried it with her out of Tehran during the Islamic Revolution, but that’s another story) and told me about the kimchi and sauerkraut he was making at home on a weekly basis.

The real tipping point came when, after having some wonderful lacto-fermented pickles at a farm-to-table joint in Roanoke, I started researching how to ferment whole vegetables along with shredded krauts and kimchis. While traditional fermenting in ceramic crocks requires frequent attention and occasional scum-skimming, I found a process that uses brewers’ airlocks to avoid the slimy top-crusts and questionable molds that were the major hurdles to getting into the game. I fabricated the necessary lids with the help of an electric drill and a pocket knife, and once I got started there was no stopping me. Jars of carrots, celery, radishes, turnips, chiles, rutabagas, and anything else I thought might make a delicious, funky crunch began filling all available counter space under one of my dozen airlocks.

Not everything was great at first (and some weren’t exactly edible), but I had enough winners and enough practice that I was soon cranking out live culture pickles that would be the pride of Czech grandmothers and Williamsburg foodies alike. With my new equipment, I also branched out into apple ciders and dandelion wine and kombucha and just about anything else that uses yeast and bacteria to make alcohol or acid. My partner gave me and my experiments some funny looks, but she let me have my fun — and we both enjoyed the fruits of my microbiological agriculture. I kept the little microbes happy, and they returned the favor.

As much as I love a good pickle, my salt tooth wasn’t the only reason for my fermentation spree. I was spending a tremendous amount of time and energy in a career that was, I was discovering, not where I needed to be. Working seven days a week with plenty of ten- and twelve-hour days, I needed a low-energy, high-reward hobby that could keep me moving and feeling some connection to life beyond the job. Packing vegetables neatly into jars, watching the little bubbles of carbon dioxide escape through the airlocks, and sampling the results with friends was relaxing and rewarding. I also enjoyed the praise when someone at a party would ask where the carrots came from and tell me they’d be a happy customer if I ever decided to sell them. It wasn’t such a leap of the imagination, then, to think about starting a pickle business when I finally decided to leave my full-time job.

Farmers’ Markets are understandably seasonal, so my late-summer career change meant that the pickle stand couldn’t get underway until the following spring. That left me with a few months to test recipes, buy more equipment, and scale up production before launching the business. I bought some large food-safe containers, snagged some social media accounts with the tentative company name, and started making pickles by the bucket-full instead of by the jar. I can eat a lot of fermented veggies, but even I can’t make it through five gallons of radishes in short order. As the test batches finished and the pickles pilled up, I did what I had always done with them: I packed them into empty jars and sent them home with friends and neighbors. The trial runs were a success, and I marked the sign-up date to reserve a market stand and started double-checking all the details of pricing, packaging, etc.

Then a funny thing happened. Those early test-batches brought in unexpected returns. Houseplants showed up on my front porch with thank you notes. People invited us over to try their homemade breads. Friends dropped by with venison from their dad’s last hunting trip. Other friends brought me interesting little bottles of local spirits they found on vacation. Everyone had stories about the food their families make and cherish along with (pure gold) recipes from their mothers and great-aunts. The trade in goods and stories only increased when I convinced others to try out fermenting for themselves, and, as I gave away airlocks or told people how to make their own, I found myself in a community of makers who swapped ideas, successes, and interesting failures. I suppose these exchanges had some economic value (bartered goods have a price), but the real payoff was the growth of my community. Because we were giving gifts rather than buying goods, and because gift-giving encourages other kinds of hospitality, many acquaintances became close friends and friends became our local, intentional family. While I had been focused on cultivating colonies of friendly bacteria, a vibrant community of friends grew up around us.

The orientation meeting for new vendors at the Farmers’ Market took place in late January. A few days before the meeting, I reviewed the guidelines for the market and looked back over my notes from the past few months. Our local market is a “makers’ market” that encourages vendors to talk with customers about the products, their sourcing, and the work that brings them to market. I could certainly imagine myself talking with customers about where I get the veggies and how I brine them and get the microbes going, but I couldn’t see myself stopping there. “Try it yourself,” I would want to add. “Make your own and bring me your favorites! It’s so simple. Share the love.”

I also couldn’t imagine myself telling my friends that they’d have to start paying for their pickles; four bucks a jar isn’t nearly as good as the returns I was already getting. Since giving your product away isn’t a good business plan, I abandoned my dreams of joining the Farmers’ Market. I ditched the orientation meeting and hosted a game night instead.

We hear all the time that we live in a “gig economy,” and I know that side hustles are an important part of many household budgets. My experience over the last six months has given me a glimpse of what the “sharing economy” might cost us in terms of community. I’m currently enjoying unforeseen benefits from an environment of real sharing — goods, stories, hospitality — and I wonder what we sacrifice when we place a dollar value on everything from trips to the airport to cat sitting and kombucha scobys. Have any of you had to make a decision between hospitality and hustle? Do you have side gigs you wish were building communities instead? Have you been able to make it work both ways? And — most importantly — do you have any recipes to share?

Frederick Coye Heard lives in the Shenandoah Valley where he enjoys fermentation and writes about living cultures on a variety of scales. His projects often appear at HeardFC.com.

1. We Did Good, Billfold
2. Question Wednesday
3. What I Learned From Five Years of Writing and Editing for The Billfold
4. How a Program Assistant Dealing With a New Paycheck System Does Money
5. Classic Billfold: What I Wanted From My Move to Portland and What I Got
career change seriescareer-changefarmers-marketfoodpicklesside hustles