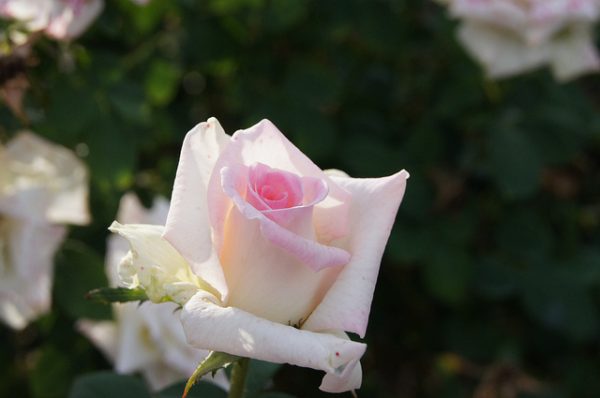 There once was a merchant with three beautiful daughters. The first two won’t get names because they aren’t really relevant to our story; the youngest daughter had a name, but it’s also kinda irrelevant because everyone just called her Frugal. (They would have called her “Cheap,” but that has sexual connotations.)

Frugal hated spending money. She was the type of person who would return a book to the bookstore after reading it — and when her sisters tried to suggest that maybe she shouldn’t do that, she’d say “The bookstore has a return policy, and I’m returning the book in like-new condition. Now someone else will get the chance to read it, and that’s one fewer tree that has to be cut down.”

One day their father announced that he was going on a business trip, and he asked his daughters what they’d like him to bring back from his travels. Their father had been asking them this question since they were children, and although it had been fun to reach into his coat pockets and pull out maple sugar candy from Vermont or flag-waving teddy bears from Washington, DC, they were adults now and could buy anything they wanted online. The two older sisters understood that their father wanted to remain connected to them in ways that were kind of unnecessary but still sweet, and one of them hinted that she could use a new pair of gloves while the other said “whatever state-themed treats they sell in the airport, chocolate shaped like moose poop, that’d be great.”

Frugal asked for a white rose from someone else’s garden.

“People put gardens in their front yards to benefit the neighborhood,” Frugal said. “You’re taking the resources they offer, and you don’t have to participate in some capitalistic ritual.”

“Yeah,” Frugal said. “But most people don’t take a rose.”

Four days later the father found himself standing outside of a heavy iron fence, trying to work himself up to the idea of cutting off one of the roses that poked through the bars. Did Frugal even realize that you couldn’t pick a rose with your bare hands? It was a good thing he always packed a Leatherman when he traveled.

Are you sure you want a white rose? I’d be happy to buy you something else instead. Love, Dad.

i don’t want you to buy me anything

i told you already

A few minutes later, Frugal’s phone rang. “Honey, I think you’d better come down here,” her father said. “I was trying to explain to the homeowner why I was cutting a rose from his garden, and I know you’re better at articulating your philosophies, so maybe you can… help?”

Frugal got on her bike and rode to the big old house on the edge of town that nearly everyone forgot was there, but was apparently on her father’s path from the airport back to — you know what, just don’t think about it too much. When she arrived, she saw her father trying to apologize to a man who could only be described as a beast.

“What’s all the trouble?” Frugal asked.

The beast explained that he had caught her father trying to steal a rose, and Frugal argued that the word “steal” was a little harsh, and he wasn’t harming the rosebush, and if everybody shared with their neighbors the world would be a better place. “I don’t believe in using money,” Frugal said. “I’ve found that if you ask, people will be happy to give you what you need.”

“I’ll ask,” Frugal said. “Will you let my father keep this rose?” Seeing an opportunity to teach the beast a lesson, she continued. “And… will you share a meal with us tonight?”

“I really have to get back,” her father said. “I have a ton of emails.”

The beast didn’t want to invite Frugal into his home, but when he was a child he had been shamed for refusing to offer hospitality to someone he didn’t know, and because of the guilt associated with that old memory he felt compelled to say yes — and then he immediately began asking himself why he didn’t stand up for his own boundaries, and his mind kept circling around the uncomfortable fact that he had said yes when he wanted to say no, and he really should find a therapist so he could talk about this with someone. Next week. He’d do it.

“So she’s still living with you,” the therapist said. “How do you feel about that?”

“I’m not used to it,” the beast said. “But maybe living alone isn’t good for me. I’d talk to inanimate objects sometimes. Not like I’d think they’d talk back, just, you know, asking my teacup how it got chipped, that kind of thing.”

The therapist smiled. “I’d say that’s pretty normal. But… how do you feel about this woman taking residence in your home?”

The beast wasn’t sure how he felt. He knew how he really felt, and he also knew how he was supposed to feel. He wasn’t supposed to enjoy living alone. He was supposed to be looking for a partner and starting a family. He was also supposed to be kind to people who were less fortunate than he was, and although he wasn’t sure whether Frugal was actually less fortunate, he knew that she needed a place to stay. She’d explained it all to him: how she’d couchsurfed, the time she spent a month housesitting for a friend, the time she tried to convince a group of potential roommates that she should live in a collapsible tent in the living room — that she’d only put up when it was time to sleep! — in exchange for not having to pay rent.

“I was also going to cook for them,” Frugal had said. “It was a fair offer.”

The beast tried to think of the most honest way he could combine all of his feelings. “I worry that if I don’t learn how to live with someone else, I’m going to miss my chance. I really like the life I have, but if I don’t learn how to share it with anyone, or compromise, or do any of those things, will it be like… time’s going to run out? And then if I meet someone later, I won’t know how to love them?”

“That’s all worth discussing,” the therapist said, “and that’ll be a good place to start in our next session. But I still haven’t heard how you feel about this particular woman who is sharing your space right now.”

The beast didn’t say anything.

One day the beast came home from work to find that Frugal had broken a mirror — and it wasn’t just a mirror, it was a family heirloom, and it was in a room that he’d asked her to stay out of, and when he asked her how it had all happened she had simply said “I needed a mirror to see what my hair looked like from the back.”

“Are you going to replace it?”

“I could check the local Buy Nothing group,” Frugal said. “But do you really need another mirror?”

The beast took a breath. “It was something I kept to remind me of my mother.”

“Well, you’re not going to forget her,” Frugal said. “We don’t need stuff to remember the people we love.”

The beast knew she was trying to be helpful, but all he wanted to do was scream and roar at her because she didn’t understand, why did she think that she could just move into his home and start changing things and going into rooms that he’d asked her to stay out of — and then he felt ashamed, again, for not being more generous and open and all of those things that he worried he wasn’t, those parts of him that made him question whether he was as fully human as everyone else because they all seemed to be living these free, messy, impossible lives and all he wanted was to come home after work and put his feet up and sip his tea and read one of the books that he’d gotten from the library.

He left. He let himself slam the door. Then he worried that Frugal would be angry with him for being angry with her.

When he returned, there was a note on his kitchen table:

Dad got sick. Going home. Thank you for everything.

She had also left a rose — a red one this time, and obviously cut from his garden. He picked it up, and a petal fell to the ground, and he felt happy.

1. We Did Good, Billfold
2. Question Wednesday
3. What I Learned From Five Years of Writing and Editing for The Billfold
4. How a Program Assistant Dealing With a New Paycheck System Does Money
5. Classic Billfold: What I Wanted From My Move to Portland and What I Got
fictionfinancial fairy talesthis is both a meta Beauty and the Beast story and a meta Billfold story have fun finding all the referencesyes I did sneak one Harry Potter reference in there because of Emma Watson