Why I Never Moved 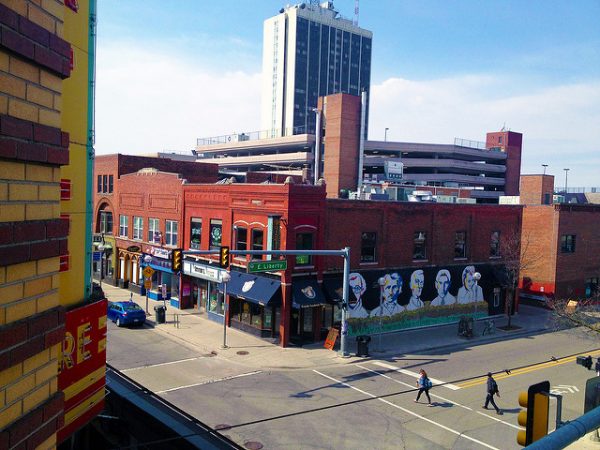 It’s not easy to consider leaving a place you love, full of people you love to boot. Even though I’ve sometimes thought about moving, I haven’t lived in a different city since I was eleven years old.

I’ve always loved Ann Arbor. Loved the culture, the quirkiness, Michigan football. Like a lot of kids growing up in Michigan, my dream was to go to the University of Michigan for school. I never wanted to go elsewhere. So I went to college here and by the time I had my degree was ready for a fresh challenge. Immediately after I graduated from college in 2013, when my friends left town to return to sleep in their childhood bedrooms until they found jobs, I did the same thing — only I didn’t have to leave town.

I had dreams of moving to New York City to work in publishing that didn’t mesh well with my student loan payments or the fact that I was making $11.50 an hour as a receptionist in the only job I could find (thanks, Great Recession!). So I simplified: I’d find a way to move out of my parents’ house and go from there. Gradually I managed to move in with roommates, and pretty quickly my next goal became to upgrade to living on my own — first in a studio, and then in a one-bedroom. I sought and found higher-paying jobs to facilitate the changes to my lifestyle and to get closer to a job that fit in with my desired career path.

But while I was moving around, my friends were moving away.

Each time I moved apartments I asked myself whether I should be moving to New York instead — or to Chicago, which was much more affordable. I applied to dozens of jobs in Chicago during the first couple of years after graduating, but I only got one phone interview — which I promptly bungled by forgetting that Chicago is on CST. Over time I became more and more settled in Ann Arbor as an adult: my social life was better than it had ever been, and when friends moved away I made new ones. I spent more time on hobbies. I started getting involved in local politics.

Ann Arbor is a transient town. Students come here for school and leave when they graduate. Postdocs come for just a year and leave when their contract is up. Young adults from the rural towns in Michigan arrive to check out a city lifestyle. My parents, teenage brother, and four grandparents all live in Ann Arbor. My mom has health issues that make it impossible for her to travel, so moving would mean rarely seeing my parents.

When I meet other twentysomethings, the conversation often turns to where we’re “from.” Most — if not all — of them have lived in another city by now. They try to sound polite, but there’s still a tinge of surprise in their voices: “Oh, so you’ve never really lived anywhere else?” It’s the same tone of judgement I get for not being well-traveled. Ann Arbor is quite affluent and attracts affluent people. The ability to uproot your life and spend thousands of dollars on moving expenses and a security deposit, or travel to a new country every year, is often assumed. That’s a lot of pressure, and brings about a powerful shame that I can’t, or won’t, do the same. I’ve been judged as incurious (false), risk averse (true), too entangled with my family (maybe). I say “judged” very authoritatively but have to concede those judgements are based on my interpretations of conversations, and probably reveal as much about my own feelings as those of the people I meet.

What has drawn friends to other places, and drawn new friends to Ann Arbor, are results of choices that haven’t applied to me or that I have chosen against: relationships, extended schooling, making it in the big city. Remaining in place seems static, passive, but it is a choice. It might not be the adventurous choice, and it might be a choice I made out of perceived necessity, but it is my choice. This, perhaps, is what makes the sense of being left behind doubly painful: accepting my responsibility for a situation for which I am ambivalent at best.

Two summers ago I attended four going-away parties, including that of my best friend, who has introduced me to most of the people I’ve met over the past several years. It was hard, but I survived. Gradually, surprising myself, I met new people, made new friends. Life went on.

While I’m certainly not opposed to moving away in the future, there are some perks to living in your hometown that can’t be beat. There are cashiers at Kroger who have watched me grow up. There are still many parks and restaurants I have never been to, so I know there are always new experiences right under my nose. The places I pass every day have so many timestamped memories imprinted on my brain that it feels like I see them in colors there aren’t names for.

Kelsey Zimmerman is an editor from Ann Arbor, Michigan. She always has a project on her knitting needles and loves being asked if she’s thought about going to grad school recently.

1. We Did Good, Billfold
2. Question Wednesday
3. What I Learned From Five Years of Writing and Editing for The Billfold
4. How a Program Assistant Dealing With a New Paycheck System Does Money
5. Classic Billfold: What I Wanted From My Move to Portland and What I Got
homemovingmoving series