The Billfold
Have you ever wanted to move abroad?

Should We Stay or Should We Go? 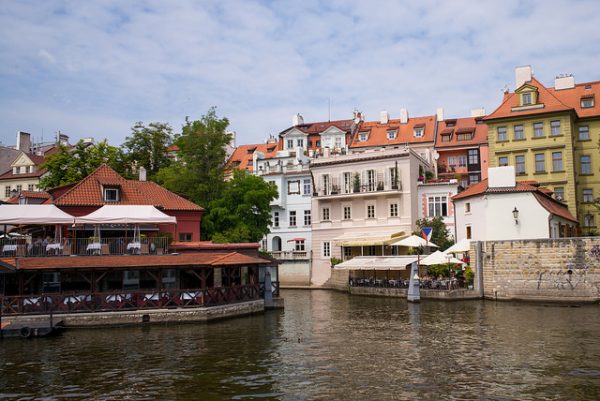 I don’t recall which of us first floated the question. “Have you ever wanted to move abroad?” It was in early 2016 that my husband and I first started a series of summits on the subject of our life together. Over a pint on a rare day off, we’d run through options. Where we call home, the cost of living is low but so is the quality of life. So rare are full-time jobs in our field that it would be easier to change zip codes than companies. We worked for the same business on opposite schedules. It wasn’t sustainable. We needed a change.

What I termed our “zones of habitability,” i.e. where we’d be willing to go were we to stay in the States, lined up. Warm, but not too red. I spent hours reviewing safety statistics, employment data, and cost of living estimates. Very little fit. Finally, exasperated by the whole process, I declared, “what about Prague?”

What about Prague, indeed? I had spent two weeks in the city a decade prior and never fell out of love with it. Prague was most of what we were looking for: a small city with thriving culture, a cost of living roughly equal to where we were now, but low in crime and high in opportunities for us to grow professionally and as a couple. What Prague is not is warm, but I was willing to trade warmth for a change.

To support my suggestion, I did my research. We could each apply for a trade license, aka a Živnostenský list, during our initial 90-day stay in the Schengen Zone. If we were approved, this would allow us to work as freelancers in the Czech Republic. Bloggers who’d done the same recommended hiring a relocation company to guide us through the application process. They estimated $1,000 USD per person for the service, so we earmarked the funds in our savings.

Among other requirements, we’d also require proof of funds fifteen times the “existential minimum” for the first month and double that amount for subsequent months for the length of our stay. The Ministry of the Interior of the Czech Republic tallies this amount on their website to 81,400 CZK, or $3,749 per person. I read elsewhere that $6,000 was the benchmark, so we decided to shoot for that. That $6,000 would help us during the wait while our applications were processed; I had been cautioned that could take up to three months.

Despite the price tag and knowing it would mean diverting savings from “honeymoon” to “move,” my well-traveled husband was intrigued. This wasn’t just any move; going abroad would be an adventure. He, who had lived in Denmark for a semester in college, lit up at the idea. We agreed to make a final decision in December. When no better options presented themselves, we agreed to embark on the most stressful thing we’ve ever done.

The first thing we did was renew our passports, with checks tucked into a Priority Mail envelope for $110 each. The new photos we affixed to our applications were $20 before tax.

As soon as we could buy plane tickets for 2018 we purchased two one-way tickets to Munich at the cost of $1,500. We selected seats in Economy Comfort so that we could have a row to ourselves, an extra carry-on and checked bag apiece, and complimentary beverages. (I’d need one.) The fare would also allow for changes to the itinerary should we need it. I reasoned we might and made the case for the upgrade from coach. Booking early may not have saved us money, but it put a date on the calendar: March 15th, 2018.

In June I quit my job to gain full-time freelance experience before making the move, tapping every trade skill that I had. Since leaving I’ve made $7,425 in earnings, enough to probably convince Czech officials that I could manage the minimum monthly income from multiple clients, which I last calculated around $800 a month. My husband spent $600 to take a teaching English abroad course specifically geared for Czech-speaking students. With “educator” among his job titles, we hoped that his work experience would give him the edge over the plethora of younger applicants all vying for low-paying English teaching positions. We’d have to lean heavily on my freelance business, which struggled to take off. Still, the move would more than quadruple my potential client pool, though I’d need the help of a translator to convert them.

We secured a large Eagle Creek rolling duffle bag to carry most of our clothing, the last piece of luggage we needed to haul our lives overseas. It was $199 with tax, on sale from $270. Shortly thereafter, we both applied for Global Entry, $100 each. We’re approved for the next five years. (I learned after the fact that Icelandair, which we’ll be flying, does not participate in TSA Precheck, so those Global Entry benefits will not help us on our way out.)

After going back and forth between hotels and homestays, I put the first payment down on a 32-night condo rental in Prague to the non-refundable tune of $480. The second payment is due in February, and it might cost us a little more or less depending on the exchange rate at the time. We’d use the condo as our hub until we could rent another furnished place for a longer period, per the long-stay visa requirements. I bookmarked only Czech-language real estate pages, as the apartments advertised within them were cheaper than the apartments on English-language sites. We’d need cash for the first and last months’ rent, as well as the security deposit; we’ll have to wire it from our domestic accounts for a fee. Last I checked the fee was $30.00.

I picked up two Southwest Airlines tickets, on sale for $494, to get us to the East Coast for our Munich-bound flight. We both have parents in Virginia who want to wave us off, and our nearest airport doesn’t have an international terminal.

It was around Halloween that the uncertainty crept in. My husband had only applied for two jobs in his life; since he needed practice, I pointed out a job opening in California. The ad had been up for three weeks; I never fathomed that he’d receive a callback. Three days later, they wanted to schedule an interview in mid-December. Suddenly his interests turned to finding the best ski resort that was near the high-cost city where the job was. A switch had flipped.

If he aces the interview and takes the job, we might be moving to California in less than a month—so we stocked up on $129 worth of moving supplies. We’ll use those regardless of where we end up. The same can’t be said of the international plane tickets. To date, we’ve spent $3,534 on arranging a move that might not happen. Factoring in the opportunities lost, the number is higher still. The time-taxing job I left would have allowed me to save over $10,000 in the period since I’ve been freelancing, but at what cost to my new marriage?

There are other expenses we’ve yet to pay for. $250 for a local moving company to truck our belongings into storage. We don’t dare sell them; if denied a long-term visa we’ll end up back home in seven-to-nine months and rebuying all of our belongings isn’t realistic. A storage unit will cost us just over $100 a month for that period. I plan to sell my car, but will have to keep non-owner’s car coverage to cover liability insurance for the rental vehicle we’ll need in Virginia. I’ll cancel it as soon as I know we’ll be gone longer than half a year. Another $226 will cover a cheap hotel in Munich that I reserved for us to recover in. A train will take us into Prague three nights later, and we’ll need to arrange transportation from the station to the condo, then back again to pick up a monthly public transport pass. Then there’s the inevitable trip to IKEA to find things that make the space feel more like home. Budget: $75 and some Swedish meatballs.

While I’m knee-deep in details and logistics, my desire to get away wanes. A cross-country move has started to look easy by comparison. Not necessarily cheaper, but within my capability. My husband has made four moves in his life while I’ve made twenty-nine, crossing the Mississippi thrice. He wants this next one to be more permanent than I can promise.

With three months to go, he YouTubes Czech-language Sesame Street on his breaks, while I panic, pout, putter, or some combination of the three. On Mondays I’ll champion the “just go, we’ll never get this chance again” mentality. By Friday, I’m paging through job listings for us both. We’re all set to go until we’re not. Can we commit to the complications a life abroad brings or compromise on a city in our home country? Readers, what would you do?

Anonymous has recently learned that multi-year plans are for other people. She currently splits her time between two states: being really hopeful and utterly terrified.

1. We Did Good, Billfold
2. Question Wednesday
3. What I Learned From Five Years of Writing and Editing for The Billfold
4. How a Program Assistant Dealing With a New Paycheck System Does Money
5. Classic Billfold: What I Wanted From My Move to Portland and What I Got
living-abroadmovingprague