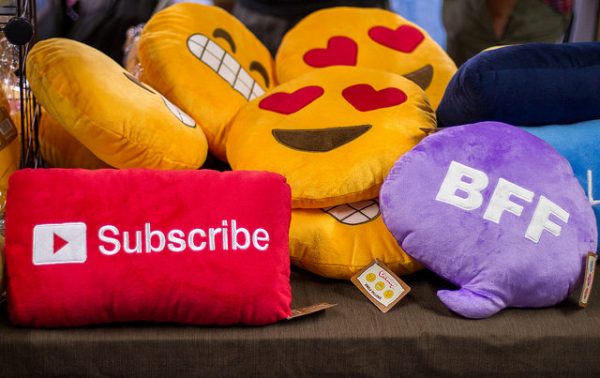 There’s always a moment—at parties, or networking events, or coffee dates—when someone asks me, “How do you know [insert mutual friend’s name here]?” Usually this is an easy question to answer. We met doing college theater. We used to work together. We’re in the same barbershop chorus. For a good portion of my friends, though, the answer is a bit more complicated.

“We met on the internet.”

It’s not unusual to meet friends on the internet these days. Tinder romances turn into successful marriages and many creative projects start in Twitter DMs. For me, though, answering this question opens up a whole other conversation about my past hobbies and career ambitions. And it’s a conversation I’m still figuring out how to navigate.

In 2011, armed with a webcam and a desire to belong to an online community of nerds, I started making YouTube videos. These videos were pretty standard video blogs: I’d generally just turn on the camera and start talking about whatever was on my mind that day, being honest, but careful not to divulge too much information about my personal life. This was that weird time in YouTube’s history where it was just starting to be recognized as a profitable platform. Many folks were quitting their day jobs to make videos full time, but you could still gain a good following by just opening up your MacBook, saying something funny and relevant, and pressing upload. This kind of confessional, low-budget style of vlogging lent itself well to making friends in the community, especially with people who made similar content and had a similar audience.

The more time I spent on YouTube, the more I could see it as something that could benefit my career. I was working on my bachelor’s degree in screenwriting and just starting to explore all the different career paths in the entertainment industry. The online video industry was still emerging at the time, but I followed all the news and spoke to people at events like Vidcon to get an idea of what it was like to work behind the scenes. I eventually ended up interning at an LA-based multi-channel network the summer of my junior year.

I also met people from around the world, many of whom I’m still friends with. We’d stay up all night on group video-chats, have full on conversations via Twitter mentions, and hug each other tightly when we were reunited at conferences. I had couches to sleep on in several cities, and I was more than happy to play tour guide when my friends came to visit Philly. In a way, my YouTube friends became a second set of college friends. They were lifesavers at a time when I was still trying to find my footing.

Things changed, of course. Viewers (and advertisers) flocked to videos with higher production values from creators who really knew their personal brand. Many of us smaller creators started working full-time jobs that took up our time and energy. People we knew were accused of sexual abuse and misconduct. For me, at least, the YouTube world I came up in is nearly unrecognizable compared to the YouTube of today.

I moved to New York after college. Between my full-time job and the lack of good filming spots in my apartment, it became difficult to keep up with the amount of content I produced in college. I’d also run out of things to say, at least in that medium. I just couldn’t find a reason to turn the camera on again.

Now, when people ask me about my YouTube career, I’m not quite sure what to say. I don’t want to say that I’ve quit making videos all together, because there may come a day when I feel compelled upload again. Writing it off as just a hobby I had in college diminishes how much YouTube shaped me as a person. Yet it feels wrong to call myself a YouTuber at this point in time. The expectations that come along with that label have also changed so much. I don’t have legions of teen girls following my every move, I’ve made maybe one “branded” video in my entire life, and after 6 years of running ads on my videos, I’ve yet to see a check from Google.

I recently spent time with one of my YouTube friends who also hasn’t made a video in a few years. He’s started referring to himself as a “retired YouTuber.” Something kind of clicked for me when I heard this – it seemed like exactly the title I had been looking for since I stopped actively making videos.

It’s a bit strange to call yourself “retired” at 26, especially from an activity that was never lucrative. I didn’t get a pension from YouTube or a cake with a little play button when I decided to stop making videos. I’m not off sipping pina coladas on a beach in Florida right now. I’m still creating content, just in a different space.

I started thinking about the reasons people retire from their jobs. For some, it’s to prioritize their health. For others, it’s that big bucket list of adventures that calls to them from deep within their dream journals. Regardless, when and if we retire depends on how ready we are to stop doing a specific job, both financially and emotionally. Since YouTube was never a source of income for me, I could kind of just stop when I felt like it. I didn’t feel the need to keep up with the trends or conform to a specific niche with my content. No one was banging down my door, begging me to keep going. And I was okay with that.

Retirement doesn’t mean that one stops working completely. Plenty of people use their retirement years to explore new career paths or start a new business, to pursue the dreams they never had time to fully explore. In a way, that’s what I’m doing now. I’m using the energy I used to save up for my videos and putting it behind my full-time job and my writing. I like to joke that when everyone is pivoting to video, I’m pivoting FROM video (take that, media outlets). And who knows, maybe I’ll make a comeback one of these days. Michael Jordan retired from basketball TWICE before actually hanging up his Nikes.

Being a YouTuber is still a huge part of my story and my identity. I don’t think I’d be where I am today if I hadn’t started talking to a camera in my dorm room six years ago. There’s so much more for me to pursue, though. Referring to myself as a “Retired YouTuber” honors the role the website played in my life while acknowledging the fact that (at least right now) I’m not actively making content on the site. So that’s what I’m sticking with.

And I will gladly take a pina colada, if you’re offering.

1. We Did Good, Billfold
2. Question Wednesday
3. What I Learned From Five Years of Writing and Editing for The Billfold
4. How a Program Assistant Dealing With a New Paycheck System Does Money
5. Classic Billfold: What I Wanted From My Move to Portland and What I Got
hobbiesjobsretirementyoutube