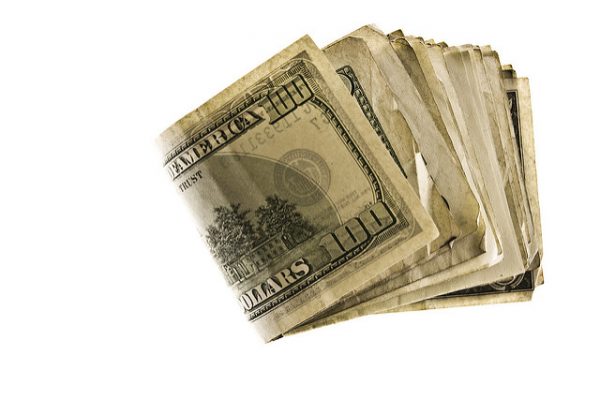 When the Bush tax cuts put some extra money into my family’s budget, my parents gave all of it to the homeless shelter. “People like us,” my dad said, “don’t need extra money.” He explained how taxes pay for schools, roads, firefighters, and a social safety net, and how a just society should collect more taxes from the people who can afford to pay. “A little more money doesn’t make much difference to us,” he said, “but it could really matter to someone who has less. It’s only fair to give it away to the people who actually need it.”

That was one of the few times I remember my parents talking about money. Mostly, they just showed me how to live. We owned few clothes and wore them until they wore out. We ate a lot of lentils and greens, and we skipped repainting our cracking ceilings (which managed to hang on another two decades without any intervention). We kept the thermostat low in the winter, conserving energy in our drafty Victorian with its riot of patterned wallpaper. My parents tossed their television out the window in grad school and never replaced it; most of our entertainment came from library trips. I was too young to remember when they got rid of the car, so in my memory, we’ve always biked, walked, and taken the train wherever we needed to go. A few acquaintances goggled at my dad’s beard, which appeared to have a life of its own, and asked if we were Amish. We were not; we were just a little weird, and we were disinterested in keeping up appearances.

My parents showed me how to live in other ways too. Despite my exasperation at our cold house and unglamorous lunches, I remember a childhood of joy, not deprivation. I have many fond memories of the times we spent together. We trekked through mountains for weeks on end. We covered the dining room with an explosion of costume-making every Halloween. We built rockets and launched them from nearby parks. In the evening we’d light a fire in the fireplace and read our separate books side by side. We sat down to ordinary dinners together at the end of the day, and I’d fall asleep to the sound of my dad noodling around on the piano late into the night. My parents dedicated their resources to the things they really cared about: curiosity, family and friends, community, music, good food, and caring for our planet and each other.

Many of those things were free or cheap. Others cost money. As far as I know, my parents rarely had to factor cost into their choices about how we spent our time. It’s easy to say that that was the case because their frugal decisions about our everyday life left plenty of money left over for fun and emergencies, but it’s equally true that the salaries from their stable and relatively high-paying jobs made it easy for them to save a lot and always have enough without having to think about it.

I experienced that for myself in microcosm when they increased my allowance in high school. Before, they’d given me a small amount every week; in high school, they started giving me a quarterly allowance of what seemed like an enormous amount at the time. It was meant to cover clothes, activities with friends, books—anything that wasn’t a basic living or educational expense. They anticipated that I might make some mistakes at first, they said, but it was up to me to learn to manage it responsibly; they wouldn’t give me more if I ran out.

My parents had laid their groundwork well; my wants were few and cheap, and that left a lot of allowance left over. My older sister had already been through this process; since clothing was the major new expense, she introduced me to the local thrift stores and taught me to save the rest. I followed her advice and found that my allowance stretched much further than my parents had intended.

I was able to save even more money in college, when I went off the meal plan to cook with friends and my parents decided the only fair thing to do was give me the money they would have paid to the university dining services. We ate the way my family had taught me: grains, beans, vegetables, milk, homemade bread. Our weekly grocery bill was a fraction of the cost of the meal plan, and my bank account grew as a consequence. By the time I graduated, I’d saved enough to tide me over until my first grad school paycheck in the fall, and I still had enough of an emergency fund left over that I have always felt secure.

As far as I understood it, my agreement with my parents was that they would support me unconditionally until my college graduation, after which I would be responsible for supporting myself. We’ve mostly upheld that agreement. But then my grandparents—who have always been more than generous with their income—started passing their remaining money down to their children. My mom, who feels like she’s doing just fine and has read much about the plights of Millennials, splits her share between me and my sister.

I greet the annual check with some befuddlement. I’m already so lucky; my family has set me up for success in a multitude of ways, and my grad student stipend covers my needs, wants, and savings comfortably enough. What am I supposed to do with this extra money?

At first I just threw it into my savings account. Later, with vague thoughts of retirement, I put it in an index fund. But in the past couple years, like many white people in the United States, I’ve become more and more aware of the racism that pervades our country’s history and persists in our institutions today. My ancestors lived through a great deal of that history. They were freedom fighters, pioneers, immigrants, suffragettes, and abolitionists, and I admire their persistent sense of justice and resolve. They were also white. The land they built their homesteads on was stolen. They were enormously privileged relative to many in this country; people in power trusted them, and they had access to loans and other programs that were barred to racial minorities. Over the centuries, my ancestors have taken and been given much more than their fair share, and inheriting their money and their privilege is what has granted me security and a financial head start as a young adult.

I’m not alone. The New York Times reports that white families have around thirteen to twenty times more wealth than black families. The deplorable difference in wages between black and white families contributes to this gap, but so does the transfer of wealth between generations that I benefit from—what a Demos report calls The Asset Value of Whiteness. Ta-Nehisi Coates examined some causes of this wealth gap and called for reparations, and I have resolved to try.

For now, with graduation and an uncertain future approaching, I’m giving away 10 percent of any money that my family gives me to organizations that directly benefit racial minorities. Last year that 10 percent went to my local community bond fund; this year, it supports communities that were hit by hurricanes in Houston and Puerto Rico. I think of it as my reparations tax; like other types of taxes, it will increase as my income does.

Ultimately I plan to give away all of the money my family gives me. It’s just one sandbag against the flood of racism—we need to change policies, structures, and attitudes, not just wealth distribution—but I think it’s a fair place to start.

Because people like us don’t need extra money, and once you have enough, you give the rest away.

Anonymous is a geologist with an uncertain future. She dances a lot and likes bread, cheese, camping, and reed instruments.

1. We Did Good, Billfold
2. Question Wednesday
3. What I Learned From Five Years of Writing and Editing for The Billfold
4. How a Program Assistant Dealing With a New Paycheck System Does Money
5. Classic Billfold: What I Wanted From My Move to Portland and What I Got
parentsparents monthreparations