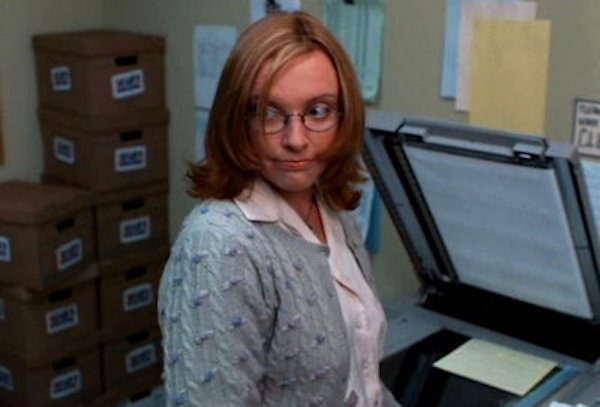 Thanks to lots of temping, and a college that forced students to get internships every winter, I managed to clock in at 25 different workplaces by the time I was 25. Here’s the rundown:

My best friend and I picked blueberries for my neighbor when we were 13. We were awful and made barely any money. The summer I was 14, I spent a day scooping ice cream at the state fair at a fundraising booth for the high school drama club. I thought the drama kids were so cool and that we would all be BFFs, but when school started back up they all totally ignored me.

The summer I was 15, my dad got me a job running the coffee cart in the lobby of his office building. The coffee cart dude was going on vacation and my dad volunteered me for the job. It. Was. Awesome. I spent the week explaining how an Americano is almost the same thing as a cup of coffee, and trying desperately to put the right amount of foam on everyone’s cappuccino so they wouldn’t complain. At the end of each day, I took my earnings out of the LITERAL CIGAR BOX, locked everything up, and went sashaying downtown to the nearest record store to spend all my money on, like, Nirvana cassettes or something, because it was the ’90s.

I worked full-time at Sears the summer between my junior and senior years of high school, selling kids’ jeans, cribs, and, strangely, video game consoles. We had demo models of all the video games set up, which I would play with my co-workers before the store opened. But the mall was gross, being on my feet for 8 hours every day was exhausting, and selling cribs to my former classmates was depressing as hell. I quit once school started back up.

The summer after I graduated, I spent all June mooning around over my boyfriend, who had just moved away. By the time July rolled around, I was desperate enough to take a job waiting tables in a retirement home. Imagine a waitress job where you have to memorize everyone’s orders, wear hospital scrubs, and report to work at 5:30 every morning— plus everyone hates you and you don’t get any tips. But it got worse! After a month, management moved me to their assisted living facility down the street, where I ran the entire kitchen by myself with no support staff. Highlights included: putting entire meals into the blender and serving them with a straw; talking to myself; wiping pee off the floor after service. Fortunately, I soon left for college.

After a few weeks of nude modeling hell, I landed a legit work study job at the library, working in the “paste room.” As work-study jobs go, it was terrific; my boss was lovely, the work was at least mildly interesting, and I could pretty much pick my own hours and come and go as I pleased. I stayed there all four years of college.

I went to Bennington College, where students are required to leave campus every winter for a “Field Work Term” to pursue internships or work in their chosen field. I had this vague idea that I wanted to get work experience at a magazine of some kind, but beyond that I had no good ideas (nor much money, at that point).

Fortunately for me, my sister knew then-publisher of The Baffler, Greg Lane, from college. She convinced him to take me on as an intern for my freshman internship, so I headed to Chicago. However, having just published a scathing send-up of unpaid internships, Greg pledged he would pay me a fair wage for my work (which consisted mostly of writing rejection letters, organizing their subscriber database, and shipping out orders of back issues). The Baffler was at that time not the slightest bit glamorous, but I was nonetheless awed to be in the presence of cool older dudes writing cultural criticism. This non-internship cemented my desire to, somehow, be involved in magazines when I grew up.

My sophomore year, I interned at two publications in the Bay Area: a poetry magazine in Berkeley, and a very Gen X women’s lifestyle magazine in San Francisco. I quickly learned why the Baffler had been so scathing about internships: I spent the winter walking dogs, filing head shots, transcribing interviews and occasionally putting the top up on my boss’ Alfa Romeo when it started to rain.

After that, I found ways to dodge the internship requirement, studying abroad my junior year and arranging for an independent study my senior year so I could finish my undergrad thesis. During my independent study, I held a couple temp jobs in Portland, filing claims for a national trucking company and landing my first secretarial job, wherein I discovered that I was a horrible secretary (not good with names).

The summer after my freshman year, I came back home to Oregon, lived with my parents, and got a job at a sandwich shop downtown. We sold lattes and pastries in the morning, sandwiches during lunch, and pizzas at night — it was an odd little shop. I loved all of it, especially making sandwiches on the big grill and mixing up enormous batches of scones in the huge Hobart mixer.

The summer after my sophomore year, I stayed with a friend’s family in Oakland and got a job at the grossest movie theater in Berkeley, serving stale popcorn and chasing away rats and masturbators. I also got a job working for cash under the table with a Bennington alum, who had a furniture shop in San Francisco where she affixed sheet metal to old dressers she found by the curb and sold them to yuppies. I spent the (unseasonably hot) summer happily sweating it out in the junky front yard of her studio in the Mission, wielding a hand sander and getting delightfully dirty.

The summer after my junior year, I moved in with a friend in Portland and signed up with a temp agency to try to score some quick work. I answered phones at a call center in the returned checks division of a corporate bank, prepared copy jobs and shipments at a distribution center, and sorted mail in a downtown office building. I loved temping because, for the first time in my working life, I could be completely honest about what I wanted, when I was available, and what I would and wouldn’t do.

After graduation, I came back to Portland and resumed temping, this time in the mailroom of the corporate offices for a large utility company. Despite having to wear ugly polo shirts and khakis to work, I enjoyed sorting letters and working the giant Pitney Bowes mail-metering machine—but riding the freight elevator all day gave me vertigo after a while and the job kinda lost its charm by the end of the summer.

Fortunately for me, a position opened up in the only-slightly-more-prestigious copy center of the corporate offices! I got to dress “business casual” instead of the polo shirt. I literally made copies all day, which was actually more fun than it sounds. I got to run a big huge machine (and fix it when it broke!), nobody bugged me, and the hours were 11–8 which I still maintain is the absolute most perfect workday in the universe.

After a year in Oregon, my then-boyfriend and I decided to move back to his hometown in upstate New York to help out with his family bookstore. I had hoped to find a full-time job of my own, but when nothing materialized, I joined him at the bookstore, where I manned the cash register and helped keep the book database updated.

To bolster our income, I applied for a secretary job in a law office, where I answered phones, took dictation, and prepared wills and deeds two days a week. The atmosphere was convivial, if somewhat chaotic, and no one seemed to mind that I was still a terrible secretary.

Somewhere along the line, I picked up a THIRD part-time job, doing part-time/on-call work in the mailroom and copy center for a small, private college. I have no real explanation for this other than, as I think has become clear by now, I like having lots of jobs?

All this time, I was trying to get a full-time gig with benefits. After applying for at least four other jobs at my local newspaper, I finally landed a position (I think I ultimately wore them down). I spent the next several years in charge of rummage sale notices, wedding announcements, honor rolls and 4-H club news.

I also continued working at the bookstore, bought a house with my boyfriend, married him, and wrote a couple of books. So, basically, the onset of adulthood, while working seven days a week.

After several years as community editor, I was promoted to managing editor, assigning stories to reporters and freelance writers. I also served as head of the editorial board during this time. And I had a baby. This ushered in the period of my life when literally all I did was eat, sleep, work and parent. But, true to form, I decided to throw some more work onto the pile.

When a friend left her position teaching journalism at the local college, she recommended me for the job, and I spent three happy semesters drilling undergrads in the inverted pyramid. But squeezing in that class around my full-time work schedule (oh, and also this was right after coming back from maternity leave) meant that I was not exactly giving it 100 percent. After the new head of the English department got a good look at my syllabus, I was not asked to return.

After 13 years at the newspaper, I was completely burned out. I loved my colleagues and I believed in what we were doing, but I knew I wasn’t doing my best work anymore. So in 2016 I left journalism for a communications job with an educational organization. I just hit the one-year mark at this job, and I still miss newspapers every single day. But the trade-off is obvious—I actually have time to sleep, have hobbies, and spend time with friends. And I’m not stopping here; I turn 40 soon, and I hope that by the time I retire, I have a lot more job stories to tell.

Emily F. Popek is a communications specialist and writer whose work has recently appeared in Hello Giggles, Civil Eats and Healthline.

1. We Did Good, Billfold
2. Question Wednesday
3. What I Learned From Five Years of Writing and Editing for The Billfold
4. How a Program Assistant Dealing With a New Paycheck System Does Money
5. Classic Billfold: What I Wanted From My Move to Portland and What I Got
25 jobs in 25 yearscareer historydoes clockwatchers still hold up?