What My Grandpa Left Me 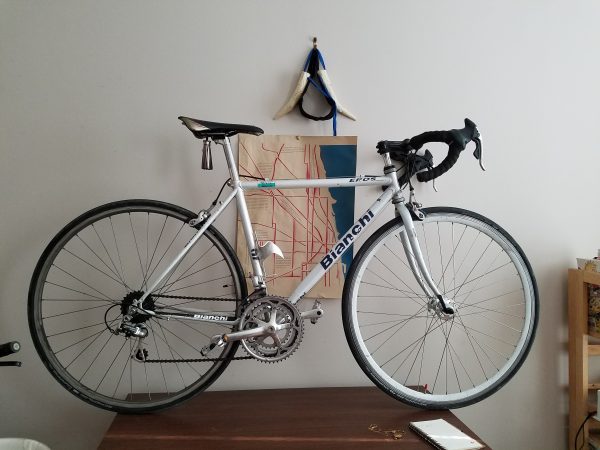 A few weeks ago I sold my beloved Bianchi Eros on Craigslist. The afternoon before handing it off, I had lunch with my dad and recounted my dealings. Are you feeling okay about money? he asked. Was there something I needed? Of course not, I waved him off. I loved the bike but I didn’t ride road anymore and it never got ridden. It needed to find a good, loving home. Besides, I had a hundred other bikes I’d been perusing through the internet and couldn’t wait to find a deal, maybe spin another bike out. The options are endless, I said. Plus, who doesn’t like horse trading?

My father laughed. You sound just like your granddad, he said.

Growing up, at any time there were three or four cars on my grandparents’ property. My grandfather was adamantly not a hillbilly or a redneck. The cars lived in the garage or the drive, or, for a time, covered on the trailer in the backyard.

My grandpa loved cars. He knew Chevy made the truck you needed to own, but the Ford Mustang was American design at its finest. In the room that had once been my uncles’, he kept manuals, magazines, dealer’s guides, all meticulously organized above his desk. When he died and my grandmother followed a few years later, I sorted through it all. I wrote his eulogy and I carried his coffin. 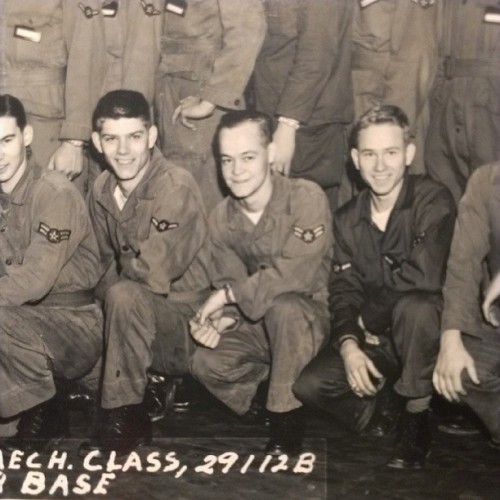 My grandpa. (Second from the right.)

The house was the only house my grandparents owned. Like many who lived through the Depression, my grandpa did not believe in taking on debt. My mother and my uncles grew up in a double-wide trailer, moving to follow the Air Force work my grandpa held, until my mother was in junior high. The tidy ranch house had been built in the mid-seventies, settled in a subdivision bordered by woods and a Christmas tree farm.

They say living in poverty roots itself in the genes and creeps into the family lineage. All I know of how my grandpa grew up I was told by others, and I’m sure his narrative repeated itself across the country. He was one of many children and came out as one of the most stable. They didn’t have shoes and they could barely eat and want nestled beside violent abuse and alcoholism and apathy. I once heard my grandpa didn’t eat bananas because once he and his brother accidentally bought some and he was forced to eat them all for his mistake. Later, I overheard my grandma tearfully add that one of his brothers had his arm broken as punishment.

I spent a lot of my summers staying with my grandparents. My cousins and I would mess around on the trailer out back, pitching it back and forth, or sitting in the tree at the back of the yard. We’d claim the cars: I want the truck, I want the Corvette, I want the convertible, shoot, I guess I’ll take the wagon. In and out of the garage came ATVs and minibikes and we’d be given reign over all of them, or told to go ride the mower around or taken for a ride in the Camaro to get ice cream.

Never did I want at my grandparents house. My grandpa gave me all the things I never knew I even wanted or needed. He taught me to shoot a gun and to drive stick shift and eat tomato sandwiches and gave me chunks of fatty ham as I bolted out into the yard after church to climb trees. He never once raised his voice with me.

He refused to be a violent man. Both my grandparents didn’t touch alcohol. In church on Sundays he sang deep and well, and if he had something unkind to say to a gossipy woman, he kept it to himself.

That my grandfather had been poor or that my mother was raised lower class had no meaning for me as a child. I was taught to keep my car clean, to be kind, and to understand how lucky I was to grow up the way I did.

Money and success and stability weighed down on my grandpa for the rest of his life. My mother said she knew he was often unhappy and anxious. I know he believed in the American myth of the ability to work hard, to get an education, and to succeed. He told me my education was the most important thing I should focus on. I knew how proud he was of my mother, a first generation college student who got her MBA, who moved away from a high-school where she was one of three college-attendees, who is one of the smartest people I know.

But I don’t know how he could hold onto this belief so firmly. After my mother was born, my grandpa worked on an airplane fifteen feet off the ground. So, when the man holding the ladder let go, that’s how far he fell. My grandfather broke his back and never healed right, trying to deal with the pain until the day he died.

The worry he carried with him didn’t leave my mother, and it hasn’t left me. Yes, I’m happy to chat personal finance, but only if its impersonal. I have lived lean and made myself unhappy and sick and hungry and shunned people because of my need to feel financially secure, like I’m not failing, like the roof won’t cave in, like I’ll make it. It doesn’t make sense in a lot of ways. My little brother makes fun of me and calls me Scrooge McDuck. I’ve never even amassed any real debt.

My mother has kindly sat me down and told me I should worry less. She tells me that she’s sorry, that her father worried, and she worried, and now there’s me.

But parents help their children, she said. Grandpa helped me and he wanted to do it. He could do it. I don’t know why, but when she said it, I felt better.

Still, I chase the concept that if I just get the arithmetic right, if I make the right choices, if I work very, very hard and sing the harmonies to “Just a Closer Walk With Thee” just right, then some measure of success and stability will also be mine. What will it feel like? Would it be property? Five cars? Five bikes?

I know this is idiotic and there is no truth to the belief. My grandfather did make it, and he did give himself and his descendents a better life, and he still faced pain and depression and anxiety. He knew he was lucky and he still knew unhappiness.

He had a temper, we know, and he worried. But he also let the neighborhood kids ride go-karts across the street and took care of his sisters. He taught me to play games fair and wouldn’t let me win at checkers. He believed in reading and science and especially music, where he bought my mother and uncles their band instruments, hauled the upright piano in his truck up to my parents’ in Chicago, or sang to me in the mornings I stayed with him: “Good morning to you, Miss Carm.”

After he died, my grandmother would tell me about the people he sold cars to, how she sometimes worried they’d all drive off and she’d never see him again. Once my father brokered a deal in Spanish and he told me that my grandpa was fair and never sold anything he wasn’t proud of or hadn’t fixed properly. He liked treasures but he never kept things in excess, and he knew when to let them go. I’ve become the person who scans eBay for my own treasures. I won’t spend the money yet, but I’ll know when it’s time to start the bargaining again.

When the Bianchi was gone, I rearranged the other bikes and organized my tools. “If you take care of your things, Carmen, they’ll take care of you,” he told me over and over again. I put the tools from his garage into each right place and ran my fingers over his initials on my crescent wrench. Then I began to take care of what I owned.

1. We Did Good, Billfold
2. Question Wednesday
3. What I Learned From Five Years of Writing and Editing for The Billfold
4. How a Program Assistant Dealing With a New Paycheck System Does Money
5. Classic Billfold: What I Wanted From My Move to Portland and What I Got
familygrandparentsmoney and relationships