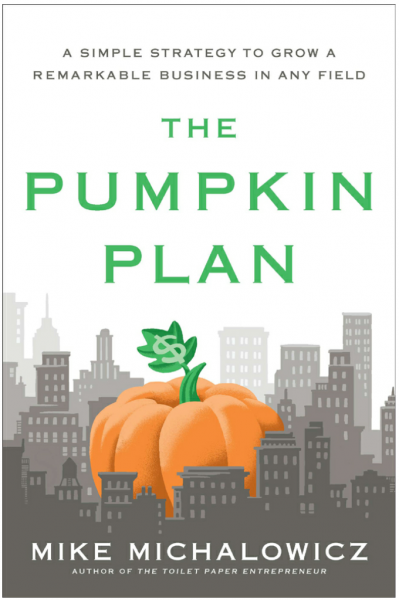 Last month, I read Mike Michalowicz’s Profit First: Transform Your Business From a Cash-Eating Monster to a Money-Making Machine, as recommended by Oh My Dollar’s Lillian Karabaic during our Doing Money interview.

I liked Profit First because it reinforced the “pay yourself (and taxes) first” strategy that I’ve been using in my own freelance career. As Michalowicz explains: if you want to make a profit on your small business, you should take that profit out first—literally put it in a bank account—and run your business on the cash left over. (Since he’s not writing about one-person freelance businesses, he differentiates between “profit” and “payroll,” and includes formulas to help you figure out how much profit you should be setting aside.)

But, as I noted in my Profit First review, your business has to be successful enough to cover those expenses (and that profit) in the first place:

Luckily, Michalowicz has another book about how to create a successful business: The Pumpkin Plan: A Simple Strategy to Grow a Remarkable Business in Any Field.

I liked The Pumpkin Plan significantly less than I liked Profit First. The basic idea is that you should find your niche and then become the best business in your niche, and although I’m totally down with knowing your Unique Selling Point, I’m less enthused about the whole “and then you have to become THE BEST because only one pumpkin can win the pumpkin prize!”

There are plenty of good tips in this book—like the chapters explaining why you need to get rid of clients that underpay or are more trouble than they’re worth—but they’re interspersed with these fictional case studies about fake businesses that became THE BEST by, for example, buying their own private TSA screening line at the airport. (Can a small commuter airline even do that?)

A fake nursing home solves its parking problem—the one thing holding it back from being THE BEST—by offering a shuttle service that picks people up at a coffee shop, which is the kind of “brilliant solution” that could only be dreamed up by someone who doesn’t spend a lot of time waiting for buses. (Also, Uber/Lyft would make that shuttle obsolete so fast.)

There are a few real-world companies mentioned, but the fact that Michalowicz has to lean on fake examples to prove his ideas makes me distrust the book’s thesis: that any business can become THE BEST if they just try hard enough. Technically, it’s “try hard enough” combined with “identify your niche” and “solve your customers’ problems,” which is the kind of advice you see in pretty much every business book. Even “drop your deadweight clients” is a standard tip.

I’ll end this review with the fake musician case study, which I’ll go ahead and quote:

You decide to document the creation of your next album, your next gig, your next tour, on video and in photographs. You live-Tweet from your studio sessions. You put questions out to your fans via Facebook, asking for input on a song. You stop hosting generic meet and greets after shows and start hosting parties instead, where you just hang out with fans. You respond to fans’ questions on your blog. Oh—and you do the coolest thing any band has ever done: you embed passwords in your songs.

I DID THE PASSWORD THING. IN MY FIRST ALBUM. TWO YEARS BEFORE THIS BOOK WAS PUBLISHED.

I DID NOT BECOME THE BEST MUSICIAN.

Also, that kind of stuff is all standard for musicians these days. (And pretty much anyone on the internet.)

1. We Did Good, Billfold
2. Question Wednesday
3. What I Learned From Five Years of Writing and Editing for The Billfold
4. How a Program Assistant Dealing With a New Paycheck System Does Money
5. Classic Billfold: What I Wanted From My Move to Portland and What I Got
billfold book reviewbooksif you listen to that first album you will know exactly why I did not become the best musician