How Lillian Karabaic Does Money 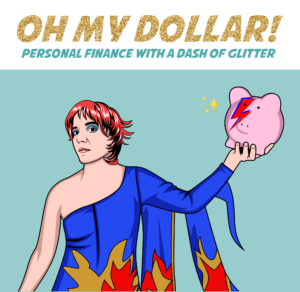 Lillian Karabaic is the CEO of Oh My Dollar!

So, Lillian, how much are you making?

Right now I’m earning around $25,000 per year, gross, between my business and my part-time side job.

The past couple years I was making $30,000 (hourly) as a nonprofit fundraising staffer, then got a promotion to $39,000 (salaried) at the same job, and then went to political fundraising, where I made $47,000 for a brief moment in time.

And you saved a large amount of that income, yes?

Before I left to start my own business last fall, I was saving more than 59 percent of my gross income.

What prompted your decision to focus on savings? I’ve seen the savings/spending data you share online, so I know that optimizing both your savings and your expenses is a priority for you.

I had been cutting it pretty close to the bone for most of my career, making pretty low incomes — $11–15,000 per year with lots of part-time jobs, so when I finally got a stable, decently compensated, full-time job with benefits, I became very concerned about making sure I didn’t “waste” the opportunity. I didn’t want to work with nothing to show for it, and having spent so many years working for poverty-level wages, I felt like I had to make up for lost time in my retirement savings.

I haven’t let my lifestyle expand too much (though I do now have a dishwasher and a washer/dryer in my apartment which is a dreamy luxury) so the savings part was fairly easy.

Getting a white collar job that paid decently meant that I felt I owed it to myself to find a way to channel that income and not “waste it.” My early 20s were spent living in a cardboard house I built, in anarchist housing co-ops, and as a live-in social worker at a radical shelter for young mothers. I didn’t want to lose that part of myself when I started making good money, and focusing on savings seemed like a good way to document, quantify, and honor, the buying power I now had.

I struggled fighting consumerism, and actually did an art project in 2015 after I started making decent money, where I took a picture of everything I bought for an entire year and put it on the internet — a lot of that was an internal accountability for me around not inflating my lifestyle.

But some of that was actually just showing others, who had long wondered “how do you afford to travel and/or do XYZ thing” on a low-income salary. I wanted to show what my spending actually looked like to help answer those questions.

What are some things that you don’t buy in order to save more money?

The biggest one is that I’ve never owned a car. It’s a trade-off; I live closer in, which costs some more money, but I find that bike commuting is a huge driver in me being able to afford and enjoy my lifestyle.

I also heard on your podcast that you had stopped purchasing alcohol?

I stopped drinking back in November, which was initially motivated by starting my business and wanting to cut back expenses, but ended up being beneficial in other ways. I’m not sure I will continue not drinking forever, but I like it so much I see no end in sight.I’ve saved, on average, $67 per month over my previous spending, which is kind of phenomenal.

I also pack my lunch every day, which was a hard habit to build in a city like Portland that has inexpensive delicious food carts on every corner, but has made a huge difference in my spending.

I spend plenty of money on things that other people see as splurges, though, to me it’s all about spending where there’s the most impact.

So doing something like cutting back on alcohol spending saves $67 per month, which is about $13 a week. Some people would see that as an inconsequential amount, or an amount that’s worth spending to get to hang out with friends, etc.

I still hang out with friends, I just spend $2 on sparkling water instead of $11 on a cocktail instead!

All amounts are pretty consequential when you’re making those trade-offs. Right now, my net income is around $1,500 per month, which means that if I want to commit to continue to saving in my Roth IRA and living my lifestyle as I like without pulling from savings, every dollar counts.

It’s all a trade-off: for example, I am heading out on a nine-country trip from Dublin to Shanghai by train in September. Most folks I know, making a lot more than me, would not be able to afford the trip, let alone a month off work.

But because I don’t have $13 cocktails or own a car, I’m able to work only two(ish) days a week at a day job, have a small side business, and, on a modest income, make a trip like that possible—also while still saving for retirement.

Congratulations! I hope it’s a great trip. I remember the podcast episode where you talked about planning it and the feeling of putting down a large amount of money to book the ticket.

Yeah, I’m so excited about it. I’ll actually be taking pictures of folks in their workspaces and interviewing them about their relationship with money on that trip, so it’s a really fantastically exciting project.

So it’s a little business and a little pleasure, as the saying goes. I am very familiar with those kinds of trips!

Has to be business if I want it to be tax-deductible!

Which brings me to Oh My Dollar!, because I am very interested in talking about that. How did you decide to start your own business?

I started teaching personal finance because at my non-profit of 30 employees, I was the only one contributing to the 401(k). Our finance director wanted to get rid of the 401(k) entirely because it was silly to only have one person using it.

I made an appeal to let me teach my coworkers an after-hours class on personal finance, in a bid to get more people to contribute to retirement.

That was back in 2014, and so that started a side hustle of teaching personal finance classes at colleges and other nonprofits.

When I decided in 2016 that working in politics was not the life for me, I decided to see if I could make this side hustle a full-time thing.

What goals do you have for Oh My Dollar!? Do you have a five-year-plan?

I want Oh My Dollar! to be about facilitating folks to lead their friends through learning about money together. We have so much cultural shame and baggage around personal finance, but literally everyone—even folks who don’t have jobs, are receiving disability or other social income — still needs to learn about money.

The long-term plan is to create the liberal feminist (secular) version of Dave Ramsey. Bring your friends together and go through the Bootcamp together. I don’t want to create a cult of personality of being “right” about money, but help facilitate folks talking about money and facing their money fears together in their own community.

Right now I teach a lot of in-person workshops, and also have an online course, but in the fall, I have a comic workbook about personal finance coming out. Just part of making all this sh*t way less scary. I have so many punk rock friends that woke up and realized that it’s time to get their money together. Hopefully Oh My Dollar! becomes the place they go to find the answers to their questions.

Ooooh I am excited for the comic workbook! I love workbooks.

So one of the biggest challenges I have as a freelancer/small business owner is figuring out how much to spend on my business.

Like, I want to invest because $$$ facilitates growth, but I also can’t afford to spend over a certain amount and I don’t want to waste money.

How do you deal with business spending and investment?

I ended up following the Profit First methodology. Not because I think it’s the best, but because it’s enough.

It ends up being a good goalpost for me, and it has been forcing me to take a really clear paycheck out of the business.

I was also put in this really fortunate spot: shortly after starting the business, I ended up getting an IDA-matched savings account, which is a type of account for low-income folks that exists in most states.

It also required me to go through a business class.

It ended up being really great, because I had to sit and think about what hard assets would be the best investment in my business, with this “free” money.

Also, I just put a library hold on Profit First. 😀

Oh good! I don’t LOVE the book, but the methodology is SOMETHING.

Yes, we certainly do.

Which brings me to my last question, which is always the same question:

If you have a regular job, negotiate your salary regularly. I waited way too long, afraid I would be seen as greedy or boisterous, and negotiating has been some of the easiest money I’ve ever made. If you’re a contractor/freelancer, negotiate your rates up regularly. You should not be charging the same thing you were three years ago.

Personally, I accepted what I was offered for far too long, and then was resentful when I found out the income difference between me and other folks with similar qualifications. If you need help getting up the gumption, check out Ask For It and watch Ramit Sethi’s salary negotiation YouTube videos.

I followed Ramit Sethi’s blog regularly when I was getting started in the workplace! He had a lot of good advice.

As do you! I really enjoy listening to Oh My Dollar! every Monday.

Thanks! Oh yeah, that’s my other advice. Listen to Oh My Dollar! 😉  If you don’t hear your questions being answered, write in and ask!

1. We Did Good, Billfold
2. Question Wednesday
3. What I Learned From Five Years of Writing and Editing for The Billfold
4. How a Program Assistant Dealing With a New Paycheck System Does Money
5. Classic Billfold: What I Wanted From My Move to Portland and What I Got
doing-moneyinterviewmoneypersonal-financepodcast