The Billfold
It Was Here and Then It Was Gone

More Than $1K Worth of Clothes I’ll Never Wear Again 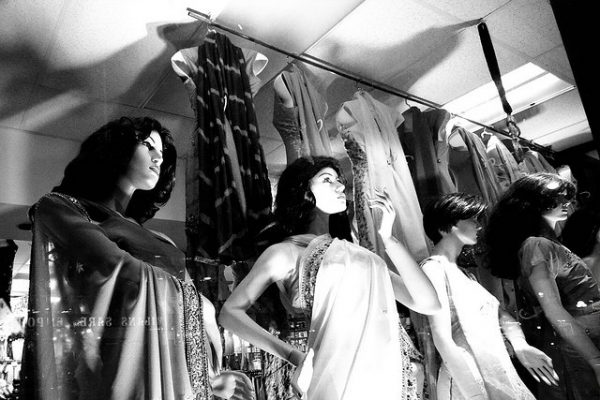 I’ve tried to write the first sentence of this post about a hundred times now and it’s proving very difficult; it turns out money matters are incredibly hard to talk about. I think we found a taboo, you guys! Imagine: even here, in this adult-diapered medium, there’s a last bastion of self-revelation that’s untouched. I’m just stalling now basically. Okay, (deep breath) here goes.

In 2008 I got a book advance of $200,000, of which my agent took 15% and the IRS took approximately one-fourth. Still, that’s a lot of money, even paid out in quarters over the course of several years, and for a few months after I got that initial check — for the first time in my adult life — I mistakenly assumed that I didn’t have to keep track of how much money I was spending. Because surely this good fortune was the beginning of more good fortune to come!

There would be foreign rights sales, audio rights sales, fat old-school magazine payments for first serial rights when the book came out, maybe a film or TV option — not to mention all the paid teaching and speaking opportunities that having written the kind of book that a publisher would pay a six-figure advance for would undoubtedly bring my way. And then, too, there would be another payment of the same amount or more money for another book, a book I couldn’t quite imagine and hadn’t even started writing, but would definitely be able to write in a year or less after the first book came out because what was I, lazy? No, I was quick, quick like a blogger!

Without whining or belaboring, I will just say briefly that precisely zero of these rosy fantasies came to fruition. Other stuff happened, maybe better stuff in the long run, who knows. My publisher, I’m sure, did the best it could. My book did the best it could. The U.S. economy did the best it could, or something. Please don’t imagine a pathetic little violin solo here. I’m not asking for sympathy, I know I’ve been lucky. I’m just saying, if you ever find yourself in a similar position — and indeed, a few of you undoubtedly will! — here are some simple rules to follow, all of which I broke.

1. Don’t live alone in New York City unless you have a full-time, high-paying job and plans to keep it for the forseeable future!

2. Don’t pay for your own health insurance!

3. No international travel, even if your boyfriend is living abroad for a year!

5. Don’t do yoga teacher training, it is so expensive and you will never make any money as a yoga teacher!

But wait, actually, you know what? I’m glad I violated all of those rules. My year of working on my book pretty much exclusively while sometimes flying back and forth to Moscow and going to therapy all while renting my own apartment where I could have the furniture and stuff arranged any way I liked and if there were messes they were all mine — that experience was priceless. Well, it wasn’t priceless — I know exactly how much it cost (see above). And it sucks to have spent all that money and to be broker than a joker now. But if I had it to do over, I wouldn’t do anything differently… except for one thing.

I WOULD NOT BUY ANY CLOTHES. NOT ANY. ZERO CLOTHES.

Owning my mistakes and ne regretteing rien is kind of my “thing,” but these garments are the exception. Some of these items were mistakes from the moment I walked up to the register. Others just wore out their welcome, or have context associated with them I can’t stomach now.

Also, I should state upfront, I have worn a thrifted button-down shirt or, in the summertime, an American Apparel t-shirt and the same pair of jeans or cutoff jean-shorts almost every single day for the past six years, so what I thought I was doing buying any of this gear is very mysterious. Like for example:

Who doesn’t need a leather vest? Oh wait, I know: everyone. Everyone doesn’t need a leather vest. This is from that teenager store “LF” and it cost, oh god. I think it cost $200. I wasn’t hankering after a leather vest for weeks or anything either, I just saw it, tried it on, it looked good over whatever I was wearing that day or the mirror was really flattering or something, and I bought it. Almost immediately afterwards I realized that zero of my outfits were improved by a leather vest and also this particular vest was, maybe because I bought it at a teenager store, an appropriate size for a teenager. A small teenager. With a small ribcage. I want to keep my financial dysmorphia as separate as possible from my body dysmorphia but I will just say that it wasn’t until I saw a photo of myself wearing it — a photo taken by someone I don’t know during a panel I moderated at the Brooklyn Book Festival, which perhaps that selfsame helpful anonymous Internet person has submitted for use alongside my Wikipedia entry‚ that I realized: wearing an undersized leather vest makes a person look HELL OF LARDY.

(I know that I am not fat, but some clothing is more flattering than other clothing, and if we can’t speak frankly about that then we should just call it a day right now.)

Related: this dress. I bought it in anticipation of a holiday party, towards the end of my year of plausible potential-nonbrokeness, and I guess I wanted to send a message with it along the lines of: I can afford a nice dress. Unfortunately the high waist of this dress bisects the broadest part of my giant ribcage and blouses out right below it. A person with small shoulders and a tiny natural waist, aka the inverse of my body type, would look great in this dress. “Are you sure you should be drinking that?” said someone at the holiday party, pointing to the glass of wine in my hand. It took me a minute to realize that what she was implying wasn’t that I was drunk, but that I was pregnant.

I was not pregnant. I never wore this dress again. It cost probably around $300.

Wool cheerleader skirt from Opening Ceremony, more than $100. Because a wool cheerleader skirt is a totally appropriate thing for an adult to own. “Simple Basics for Winter: A Wool Cheerleader Skirt,” Lucky magazine does not ever say. I blame this one on going shopping with rich enablers, lovely but irresponsible people who also encouraged me, during the same shopping trip, to purchase a 3.1 Philip Lim cashmere sweater-blouse that was adorable and genuinely luxurious and which I left hanging in an inadequately defended closet, the result being that it was consumed almost 100% by moths. The moths refused to eat this skirt. We can only assume that they held it in contempt.

It’s also too small for me, but that seems besides the point.

This ethereal little number was purchased for the purpose of wearing to a good friend’s wedding, a wedding I had some trepidation about attending because my ex-boyfriend is even better friends with this good friend than I am and I was 100% sure that he would be there. He was not there. Also it was unexpectedly cold and rainy in spite of being a summertime outdoor wedding so I wore a jacket over this filmy sex-dress the whole time anyway.

Just looking at this dress now reminds me of how stupid I was to go shopping in anticipation of seeing someone I never wanted to see again. Also in retrospect it’s so obvious that this is not my style. Flowy, filmy, witchy sleeves are a perfect physical representation of the kind of girl I used to think I was, that mysterious, ringing-like-a-bell-through-the-night type. Wouldn’t you love to love her?

In a way it’s a relief to know myself better now and to know that I’m not a filmy wispy person. However, this dress cost $250 and I will never wear it again.

I wore this objectively awesome floral Betsey Johnson dress, a reissue of a classic Betsey style, to a lot of my book release events and readings and such. I bought it because it matches my book jacket. I also wore it in this cute photo. During all of those events I was nervous and I sweated a lot and now the dress, which is white, has yellow marks in the underarms that have thus far resisted all attempts at laundering (paging A Clean Person, kind of, but I’m pretty sure it’s hopeless).

Want to buy this dress? I’m pretty sure it’s historic. I am going to say it originally cost $250 but, shudder, I think that’s actually a low-end estimate.

Why can’t I wear it again, you ask? Uh, why can’t you wear your wedding dress again, jerk?! (Also the sweatstains.)

Oh and it made total sense to also buy the shirt version of this garment. Sure! Why not.

Some other sundry purchases, not pictured here because I’ve already found a way to destroy or misplace them, include a pair of jeans bought at my anxious thinnest that for a hot minute I tried to alter by slitting the waistband in the back and a pair of No. 9 clogs that I had custom-made in red patent leather in a fit of amnesia about my inability to wear high-heeled shoes of any nature (I gave them away at a clothing swap). And there’s probably other stuff that, mercifully, I’m blocking.

I’m telling you about this in the hope that someone out there might be able to learn from my mistakes. Or, if you’re a size 6 or thereabouts, you also have the option of wearing them. Make me an offer!

Emily Gould would just like to point out that $200K is not very much money at all when you think about, for example, what some publisher paid for sTORItelling.

1. We Did Good, Billfold
2. Question Wednesday
3. What I Learned From Five Years of Writing and Editing for The Billfold
4. How a Program Assistant Dealing With a New Paycheck System Does Money
5. Classic Billfold: What I Wanted From My Move to Portland and What I Got
book-advancesclotheseditors-pick