The Year I Resolved to Stop Buying Books 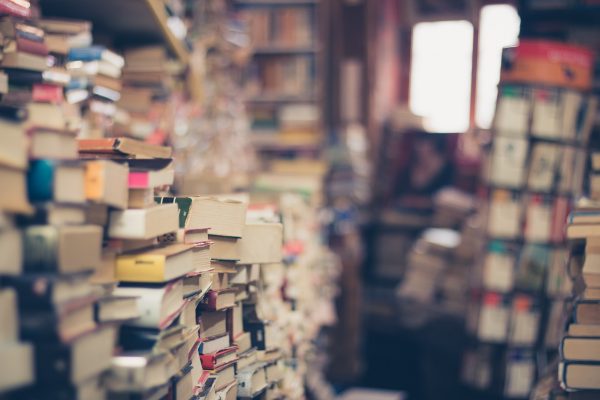 In September of 2011, I spent $98.19 at a used bookstore in Chicago. Even for me, it was a lot of money to spend in single weekend, but it wasn’t an astounding amount. I was used to walking out of bookstores with one or two new books under my arm. Every summer I walked out of my public library’s used book sale with a full grocery bag… or two. And every September, when my favorite used bookstore had a massive sale, I planned to spend at least $100 on books. So the $98.19 I spent was, if anything, under budget.

I was in Chicago that weekend to visit friends. Two months before, in July, I had moved out of my parents’ house for good. I took 17 boxes of books with me and unpacked them in my new apartment, filling up first a small bookshelf, then a larger bookshelf, then a double row on each shelf of the larger bookshelf, and finally shelving half my collection temporarily along the floor, against the baseboards. That August, my parents shipped me a Kindle keyboard for my birthday. It was a suggestion as much as a gift; no one in my family liked e-readers, but my parents had really hated helping me carry all those boxes.

I didn’t know it at the time, but that September weekend trip would be the last time I would buy a stack of books for myself… for years. Over the course of the fall of 2011, I started to realize that I really didn’t have space for all the books I owned. My one bedroom didn’t have any built-in shelving, and I was aggressively paying off my student loans, so I couldn’t afford another bookshelf. Even if I did, I was starting to worry I would never have enough shelving. I could pare down my collection, of course, but I knew that I needed a more drastic step. I implemented a Book Buying Ban. I thought of it at the time in caps, as if it were an official policy instead of one I made up.

The rules of the ban were very simple: I could not buy any physical books for myself. I could check out new books from the library, of course; I could buy books for my new Kindle; I could buy books as gifts for other people. I could acquire advanced copies of new releases to review through LibraryThing. I could receive books as gifts from other people. I could even, technically, buy a book for another person, read it first to make sure it was a good book, and then pass it along. But I would not purchase new books for myself until I had space on the existing shelves to place them. The books began to fly off my floor. I celebrated the day I had only a single row of books on the top shelf of my big Ikea bookshelf.

I made a lot of progress even without the ban, of course. Some of the books I owned were textbooks for classes I hadn’t even liked — out they went. Some of them were books I’d slogged through out of a sense of obligation – I got rid of them too. I pared down my collection of books I’d loved as a child to the books I thought I would reread; Ballet Shoes, by Noel Streatfeild, made the cut; so did all the Harry Potter books. (I cheated on the Narnia books by relocating them to my old bedroom at my parents’ house.) I told myself I didn’t need to own every book in a series and went from owning every Discworld book through Unseen Academicals to only owning Going Postal, which is the one I reread most often.

But the book buying ban was a hard and fast rule that helped me control the influx of books, and I needed that to control the overall number. I had always had more unread books on my shelves than beloved favorites, but they got away from me; I would forget what had drawn me to a novel and then let it sit unread for years, all the while buying new and more interesting books…which sat unread. The ban made it possible for me to say no, because I had to say no all the time. It made me shop my unread pile and forced me to read the staler purchases — or admit I would never read them, and get rid of them.

There were other benefits. In the last seven years, I estimate I’ve saved $3,500 (a book a week — half used, half new paperbacks, minus the roughly $300 I managed to accrue in library fines). That’s almost a full month’s pay for me, or a handful of weekend travel splurges, or one very expensive pet emergency. I’ve started to shop the library first — usually I have new releases on hold before they’re even on the shelf. At lunch this week, I wandered into a Barnes & Noble and left without even being tempted; all the books that I saw I knew I could get at the library, and the three books I wanted most were all already on hold. Besides, being more choosey with my book-buying dollars has made me even more appreciative of local bookstores; I don’t want to spend money on Amazon or Barnes & Noble when I could spend it at the small independent bookstore near my apartment, where the selection is better and they prioritize events for the neighborhood. And I’ve benefited from two large, well-funded public library systems over the years. In my smaller, suburban hometown, a lot of books weren’t available; in the two larger systems I’ve used after moving out, there are almost no books that I can’t find on a fairly quick timeline.

I’ve also come to love the idea of a curated library. In 2010 I would have scoffed at this idea. Books were meant to spread over my entire house, piling up in stacks near the bed and on tables. But now I love looking at a smaller set of books: a handful of books I haven’t read yet, and a larger set of books I know I’ll want to reread. Almost any book I reach for now is a favorite. I’ve even begun to consider what my ideal library would be — the books I’ve reread over and over again, the books I can’t live without. Books like Right Ho, Jeeves and Persuasion and The Fire Next Time. These are the books I allow myself to splurge on, buying nicer editions or (in the case of Persuasion) making sure I have an edition with the original, scrapped ending. My boyfriend even refers to what he calls my “shelf books” — books that I would want to keep on my bookshelf instead of passing along after reading. I thought it was an odd idea at first, but then last month my father gave me a copy of A Gentleman in Moscow. Ah, I thought to myself, fifty pages in. This is a real shelf book.

I have even fewer shelves now than I did in 2011, because I moved to a smaller apartment with a roommate; I don’t think I’m going to see real space on them anytime soon. But I’ve eased up on my rules just a little bit: I let myself buy books while traveling, and I let myself use gift cards for books for myself now. Still, I’ve decided to keep the basics of the ban up for the foreseeable future. I’m looking forward to a mythical future state where all the books on my shelf really are well-loved favorites or recent, exciting unreads. Maybe when I finally get there, I’ll have moved into a bigger apartment with space for a larger library, and I’ll start buying with abandon again. But maybe not; I appreciate re-reading books a lot more now too, and every time I open up a book for the second or third time, I find something new. Maybe instead of a large, Beauty and the Beast style library, I’ll have a smaller one. “Oh yes,” I’ll say about each book. “I love that one. I’ve read it a dozen times. Let me show you my favorite part.”

Emily Jacob lives in Boston, Massachusetts, and has previously written for The Billfold. She owes $2.20 to the Boston Public Library and plans to return her overdue books this week.

Photo by Eli Francis on Unsplash.

1. We Did Good, Billfold
2. Question Wednesday
3. What I Learned From Five Years of Writing and Editing for The Billfold
4. How a Program Assistant Dealing With a New Paycheck System Does Money
5. Classic Billfold: What I Wanted From My Move to Portland and What I Got
booksresolutions