My 2019 Resolution: Break Up With Amazon 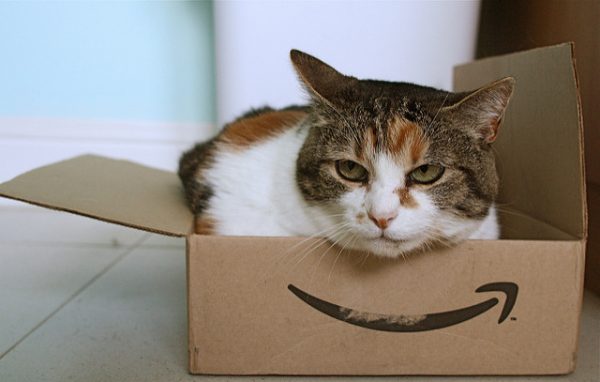 A large box from Amazon arrived on my porch this morning. It held an assortment of Christmas gifts: a family of tiny elephants for my daughter who is newly obsessed with the ridiculously expensive Calico Critters toys, some stocking stuffers, and a few books for my son. It was, according to my account history, my 41st delivery from Amazon this year.

If I can keep my 2019 New Year’s resolution to break up with Amazon, it may well be my last.

I first joined Amazon in 2007 and used my membership to make two purchases: a book and a CD, which seems to be what most people used Amazon for a decade ago. At the time, I didn’t know much about Amazon other than the fact that I could order books on the cheap, and I didn’t use it very often. In fact, from 2007 to 2013, I only averaged about three or four orders a year and spent less than $250 a year on purchases. Amazon was a convenience but not a major part of my consumer life.

And then I became a Prime member and Amazon suddenly started getting a lot more of my money. Prime seemed like such a smart idea and because I was a grad student at the time and qualified for a student plan, it seemed like it would save me lots of money. All that “free” shipping, and goodness knows I took advantage of it. At the time I was working full time, pursuing my doctorate degree, and raising two kids under the age of five. Life was busy and we always seemed to need kid stuff, so getting a box from Amazon went from being a once-a-quarter treat to a once-a-week necessity.

The first year I had Prime, I went from placing three orders a year to placing 37. I spent $1,262.73 that year, a whopping 437 percent increase. The next year I placed 41 orders and spent $1,721.70. Since 2015, I’ve ordered at least 40+ times every year. I liked the quick shipping, the ease of one-clicking something while I browsed on my lunch hour, and I greatly appreciated that it made hard-to-find items (like bras in 38G sizes) easier. I became a much more impulsive online shopper overall, especially the very expensive week when I did A LOT of shopping while hopped up on painkillers following a surgery. Without much reflection on my part, Amazon quickly became my first (and often only) stop for everything from books to bras. In the last year, I’ve also used it for order dinner delivery and groceries a few times, delightful conveniences when you have a busy job and kids who insist on eating dinner every damn night.

As much as I still like get the “yay! A present!” thrill from seeing a box on my porch, I’ve struggled this year with a growing sense of unease about my money going to support a company that is, if many published reports are accurate, not in the business of treating their employees well. There is also the environmental impact of Amazon, something that hits home every time I open a giant box to find a small item wrapped in gobs of bubble wrap. Even though I dutifully recycle my boxes, it still makes me feel vaguely guilty. Ultimately, I just don’t think Amazon is interested in being a good corporate citizen. I’m uncomfortable with the obscene tax breaks Amazon gets and with the sheer scale of the wealth that Amazon CEO Jeff Bezos has accumulated. While the $8,503.20 I’ve spent at Amazon is probably less than the amount of money Jeff Bezos makes in the time it takes him to sneeze, it is still money that I could have spent at companies that treat workers more humanely.

But, even as I’ve started to think about an Amazon-less future, breaking my one-click habit won’t be easy. My primary credit card pays reward points in credit on Amazon, so all of my Christmas presents for the kids were purchased using points, which is a nice way to make Christmas more affordable. The second season of The Marvelous Mrs. Maisel just dropped, and I really want to spend another season coveting Midge’s wardrobe. There are some products that I’ve come to depend on that I’m not sure I can find in brick-and-mortar stores in my area. I’d like to shop less online overall for environmental reasons, but I’m not sure how much weekend time I want to give up in service of errand-running.

The other uncomfortable truth is that I’m not sure how committed I am to investigating the business practices of all the places I shop. I know I’m not comfortable with Amazon and that I like Costco better because I’ve read articles about them online (probably on sites that use Amazon Web Services, but that’s another issue altogether). Am I really going to research whether the local grocery store is a union shop or if the woman who owns the plus-size clothing boutique recycles? Probably not. Should I? Maybe? Perhaps the best-case scenario, from both a fiscal and an outrage fatigue standpoint, is that I just shop less often overall.

I do still have $75.67 in credit on my Amazon account, so maybe I’ll get one more bra before I call it quits. What can I say? Break-ups are hard.

1. We Did Good, Billfold
2. Question Wednesday
3. What I Learned From Five Years of Writing and Editing for The Billfold
4. How a Program Assistant Dealing With a New Paycheck System Does Money
5. Classic Billfold: What I Wanted From My Move to Portland and What I Got
amazongoalsresolutions