Trapping Grouse for Science and Money 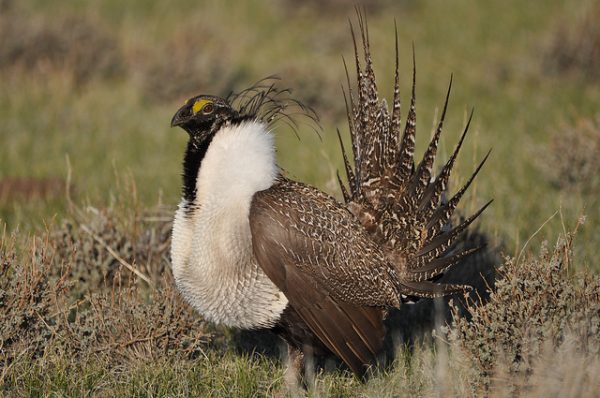 “Amble like a cow!” Brian the PhD candidate called from across the ridge. It was past midnight and below freezing in late November. We were hiking across foothills in rural Nevada and the only light came from headlamps, the stars above, and some light pollution from a goldmine a few ridges over. “You gotta amble!” Brian repeated. “Or mosey. Stop walking with the purpose of an apex predator! No straight lines!” I channeled a cow’s nonchalant attitude as best I could as we moved uphill. I paused and lurched and took circuitous routes around a particularly bushy sage, pausing again to free a net. My contract was up in a couple months and I wondered how I would translate cow walking and grouse trapping into a marketable resume skill.

We had started the night at 9 p.m. armed with fresh coffee, several granola bars, and an optimistic number of GPS transmitters to place on sage grouse — but we had yet to see one. Brian was on spotting duty and carried binoculars and a gas-belching generator on his back to power a heavy-duty spotlight. I was charged with trapping and carried a couple large fishing nets on 6-foot poles and a large battery-operated stereo.

We had seen a lot of wildlife. Pale-green eyeshine flickers of mule deer as they quickly averted their eyes from the beam. Large curious yellow-green pronghorn eyes that would occasionally loom closer to get a better look at us. Even the occasional smaller red eyes of jack rabbits and coyotes. We would joke about how we would lose our stools if, while spotlighting intently for wildlife hundreds of yards away, the red of human eyes suddenly came into view directly in front of us. But the tiny light green of sage grouse eyes remained frustratingly absent.

Sage grouse are relatives of chickens and native to the Western United States and Canada. During the spring they congregate in specific wide-open spaces called leks to strut, fight, and blow up their yellow throat sacks and dance their spiky tails off to entice a hen. The popping and blowing sacks sound like champagne bottles uncorking and the sound travels quite a distance. The males attract as much attention as they can with their dances while the hens watch carefully from the edges under cover of sage. They look for the loudest, showiest male and after they mate will go on to lay 6 to 10 eggs — half of which may survive to adulthood.

Sage grouse numbers have been declining for a while now. As a species they struggle to adapt to human intrusion of any kind. Humans bring noises and structures to the landscape. Highway and mining noises compete with the male throat sack pops and structures like oil pads and powerlines provide habitat for predators — which is especially serious if getting laid involves shaking your tail feathers and blowing your sacks without getting nailed by a golden eagle or pounced on by a coyote. Our goal was to place GPS transmitters on grouse and learn more about where they lived the rest of the year to better protect their habitat from development.

We take a break just past midnight when Brian nearly loses an ankle falling into a badger hole. Brian turns off the generator and for a moment the world is quiet. Fresh out of college, I was thrilled to land this job at $14 an hour just a few days before graduation. With the recent recession and budget cuts, wildlife biology jobs had been few and far between. Standing in the darkness after trudging around for hours looking for a wild chicken with a net and a heavy stereo felt both surreal and anticlimactic. I wanted to trap a grouse tonight and help the species, but I’m so tired. I just want to get back to the warm truck.

Brian’s sprain isn’t bad and after a few more minutes the generator comes back on. We travel back down the ridge and up another hill. He carefully spotlights the slope we just came down, scanning very slowly with his binoculars. The spotlight zeros in on one spot halfway up the ridge. “I see them,” he announces “A hen and her brood. Maybe three or four.” I stare at the spot, willing myself to see, but like usual the eyeshine of a sage grouse is too small for my naked eyes.

The grouse are several hundred yards away and up a steep slope. As we pick our way to their side we can hear the sound of grouse flushing and flying away. My heart sinks. Brian re-spotlights the area and confirms that one flew off but the rest are still there. We need to get closer but we can’t scare them off, and our direct course of action has them on high alert. Brian spotlights a point up the hill about 100 yards to the side of the grouse. “Let’s split up. I’ll go wide and come around and meet you there.” I head off towards the rendezvous while he calls out “don’t forget to amble!”

At the meeting point, Brian has lost sight of the grouse. They are behind a sage bush and we need to meander closer to see them again. Once he finds them again we realize we are 40 yards away and slightly above them. Perfect. It’s time to rock. I take out the stereo and turn it on while Brian spotlights the sage grouse, this time holding his beam on their position. “Rooster” by Alice in Chains starts playing softly on the stereo. I hand Brian his net while cranking the stereo as high as it goes to muffle our footsteps. Rock is blasting and echoing off the hills as we begin racing across the sage brush to the birds. Brian’s in front leading the way with the spotlight nailed to their location. I’m hoping beyond hope I’ll see these well-camouflaged birds before they flush.

The music blares as we close in, and at a couple yards away I finally make out the four birds crouched down and perplexed by the lights and sound. Our nets go down as the birds flush. One gets away while two scramble against their nets, but they calm down quickly. We got them. The generator and stereo are turned off as we carefully work one bird loose. She’s the hen. We take a blood sample, a few measurements and attach a little GPS transmitter backpack the size of a matchbox to her. Within minutes she’s processed and I walk her a few yards away to release her. Try as I might to avoid it, she still nails me with lime green poop as she flies off. They almost always land one on me. The adolescent bird is also processed within minutes and flies off to join her family.

The generator comes back on and we head towards the truck spotlighting along the way. Finally I’m wide awake.

Meg Renninger is an entrepreneur in Texas. Last month she used her wildlife skills to trap a squirrel and a roof rat out of her attic.

1. We Did Good, Billfold
2. Question Wednesday
3. What I Learned From Five Years of Writing and Editing for The Billfold
4. How a Program Assistant Dealing With a New Paycheck System Does Money
5. Classic Billfold: What I Wanted From My Move to Portland and What I Got
amble like a cowjobssage grouse