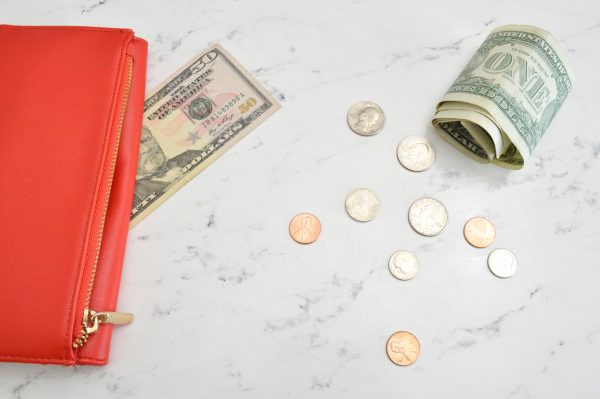 This piece was originally published on December 17, 2014.

Generationally I’m at the oldest end of the millennial spectrum, or as I like to call myself, a “Geriatric Millennial.” I still remember pre-internet life, my first email was the family Compuserve account when I was 12, and I didn’t have a cell-phone until I was 19. I had one foot in each world, the old analogue one and the new burgeoning digital dimension. I thought my life trajectory would follow those of my Boomer parents: college, employment, retirement. Alas I inherited the worst parts of my millennial counterparts: financial upheaval, debt, and the refusal to become an adult.

Most people my age and younger are sort of grasping at straws when it comes to money and when it comes to money we don’t really listen to our folks much, though we’ve asked for help with rent. For much of my life, my money-conscious father would blast warnings towards me about how foolish all of my spending was: “YOU HAVE HOW MANY SHOES?” But I laughed it off — after all look at how happy all of those fabulous fashionable working women are, living the big life in New York (I curse you, Sex and the City.) Career women have to be well-dressed and well-heeled!

And so my shopping habits grew and grew, and for me, the hallmark of success tended to translate into an ability to acquire all things “fabulous.” Maybe this is myopic, but I’d argue that our generation, maybe more than any others previously, has a deep sense of immortality and denial of the future. Whether that is indicative of our technological progression or the economic landscape, it is hard to say. But I don’t hear many 20–30 year olds worrying about their retirement.

I’ve had steady jobs intermingled with the odd unemployment stint and then a couple years where I went back to school to get my writing degree (so I could deliver this fine essay here for all of you to enjoy). I certainly didn’t spend wildly when I was in those situations; I didn’t get a credit card until 2013. But whenever I came into money I almost frothed with desire to shop for new items.

Clothing, shoes, makeup and books. Those things are my coveted goods and the things that I allowed myself to have always telling myself “hey, I deserve it!” I think many other men and women in my age-bracket do the same thing: Make sure you can pay rent, and the rest is fun money that you deserve to spend due to your hard job.

Last month I was presented with a potential job opportunity that would have involved moving to a new city. This immediately caused me to panic about my finances in a way I hadn’t ever before. I began to think of having to get a car (I don’t drive), and generally I felt I must face “adulthood” once and for all. At around the same time I saw something about “No Purchase November” which only now that I Google it realize it is actually called “No Buy November” and isn’t a widely popular thing but here, have some blog. Nevertheless, I decided to appropriate the idea behind it and see if I could save some money besides my 401(k). (“See, if you have a 401(k) then you don’t need to really worry about saving any more money” — my brain.)

My rules for my No Purchase November were as follows:

– Allowed to make food purchases only, including restaurants

– No clothing, books, shoes, makeup or any other material goods, except a birthday present for my sister which was actually just gourmet coffee and tea so I managed to keep it within the food rule anyway

The first few days of abstaining I noticed only some mild Kindle cravings or two, but after about a week of buying nothing, I began to feel slightly anxious. Since I had the “food is ok” rule, I went to grocery stores constantly and bought a lot of extra food. My tea collection is currently out of hand.

The hardest part was keeping me from shopping online: idle hands are the devil’s Gilt sprees.

Some of the ways I managed to resist shopping were by taking careful inventory of what I currently own, starting with clothes, and moving on to makeup and shoes. I don’t remember the last time I so carefully sorted through my things. I spent the Saturday before Thanksgiving organizing my heaping mounds of clothing. Reflecting on what I owned in this way distracted and shamed me into a shopping moratorium. I felt sort of sick that I had so many clothes  —  many that I had forgotten about. How could I possibly buy anything with all this stuff right here?

I tend to avoid things out of fear, and organizing this crap was one of those things. When finished, this act of admiring my newly organized closets helped me feel more secure and less manic. Also, it was clean and beautiful and I had new outfits to wear that I hadn’t ever matched in the past. I don’t know if I would have been so compelled to organize if I hadn’t done this self-inflicted month-long-abstinence.

Towards the end of the month, I developed feelings I did not expect at all: contentment and pride. I expected further withdrawal, emptiness and boredom, but instead realized that I have everything I need right now  —  that organizing seriously helped and I am not a tidy person  —  but also this sense that I was doing really well with myself! It was nice to have pride because of a straightforward self-imposed goal.

Instead of shopping after work I found myself going home to read and write in my journal more  —  creating instead of consuming. By abstaining from new things just for this month, I had found a wonderful displaced energy reserve that I never really noticed before. I realized that my shopping habits were reactive motions, some kind of embedded compulsory American buying reflex that I had played along with for too much time.

I not only managed to save several hundreds of dollars over this month, but I also learned a lot about my particularly urban behavior, the lure of the quick purchase and immediate availability, and the intrigue of material acquisition when receiving my paycheck. This newfound self-control became a kind of Zen state rather than some painful restriction. I had freed myself in a sense.

Today is December 10nd and have I bought anything yet? Yes, I have bought three books and one inexpensive pair of leggings. Not too bad, I say. I will be able to afford holiday gifts with much more ease than in years past and this makes me quite pleased.

Katrin Higher is a writer and comedian and reluctant day-job haver living in New York City. You can find her on Twitter @katrahigher.

1. We Did Good, Billfold
2. Question Wednesday
3. What I Learned From Five Years of Writing and Editing for The Billfold
4. How a Program Assistant Dealing With a New Paycheck System Does Money
5. Classic Billfold: What I Wanted From My Move to Portland and What I Got
no-buy novemberno-purchase novemberthrowback thursdayyes the original piece included "December 10nd" and I decided not to edit it :D