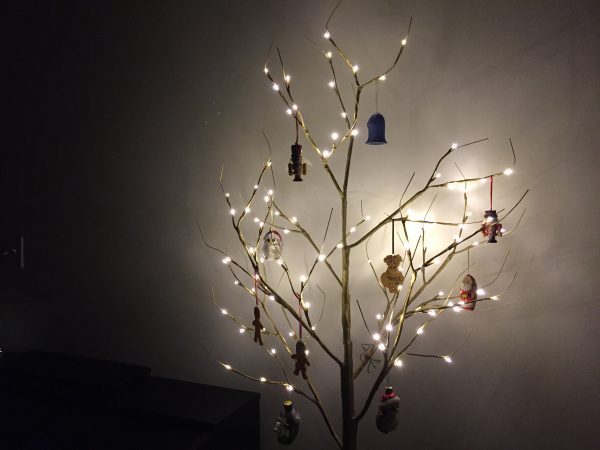 My solid gold-colored Christmas tree. Yes, I know it’s not what you were expecting. 😉

I did end up spending exactly $6 on groceries after I goofed up the cranberry relish I tried to make at home — the relish itself turned out fine, but I set it on the counter to cool before I put it on the refrigerator because #foodsafety and then I left it on the counter for three hours, which is #antifoodsafety. So I had to throw it out and buy new stuff.

I spent $2.50 on bread at the local bakery, which was less than the $5 I predicted I’d spend… but then I spent $9.69 on locally-made chocolates because I wanted to support small businesses (and also they had pumpkin pie and gingerbread truffles).

Lastly, although I did not buy anything on Black Friday itself, I did succumb to the ads and discounts and ended up spending $254.39 on gifts, which was $4.39 more than I budgeted in YNAB but I can move some money around to cover the overspend.

1. We Did Good, Billfold
2. Question Wednesday
3. What I Learned From Five Years of Writing and Editing for The Billfold
4. How a Program Assistant Dealing With a New Paycheck System Does Money
5. Classic Billfold: What I Wanted From My Move to Portland and What I Got
check-insmonday-check-inremember how I had that tag last friday asking what could go wrong with the cranberry relish?they were very good ads and discounts