The Billfold
Give Every Dollar a Job 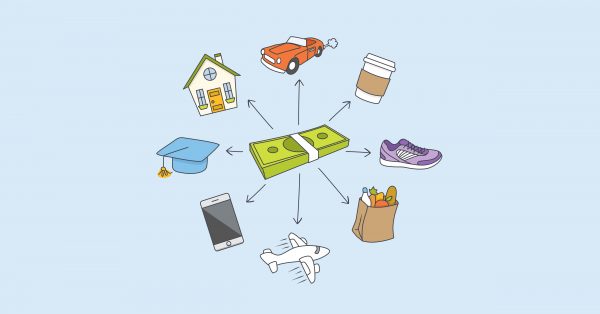 So I figured out how YNAB works.

I also figured out why it’s such a game-changer.

I started out doing all the things the guide advised me to do: setting up my budget categories, setting goals for stuff like next year’s vacation, dividing my annual clothing expenses by 12 and setting aside that much money every month, etc.

That’s when it clicked. It was, like, a sit up and lunge for the laptop moment.

If I thought I might need to live off my savings in the future, I should see just how far into the future my savings would take me.

So I gave every dollar a job. Filled out the rest of 2018 and started funding next year.

I told you in my initial YNAB post that part of the reason I wanted to try YNAB was to figure out how my day-to-day, occasionally impulsive purchases would affect my long-term financial goals.

What YNAB really showed me was how my day-to-day purchases would affect my financial runway.

If I were to buy a second piano right now, for example, I’d have more than enough money to do it — but it would push my runway back by half a month. Even if I created a YNAB goal and start setting money aside every month, I’d still be trading roughly 15 days of “financial freedom” for the purchase.

I’ve been getting daily onboarding emails from “Todd from YNAB,” and one of these emails addresses the danger head-on:

If I got really honest about what I wanted to spend my money on and what I wanted to save for my own future financial freedom — and yes, I’ve already started thinking of it this way, my “six-figure net worth” goal has now shifted to a “year of financial freedom” goal — I would spend my money differently. I mean, I already am spending and budgeting differently because I’ve started the YNAB process, but this might mean having some hard conversations with people in the future, where I’ll have to say no without saying that the thing they want me to spend money on isn’t worth the financial runway it costs. (I can’t say “I can’t afford it,” because I have a lot of cash right now. It’ll be obvious that I choose not to afford it, and that’s what’ll make it uncomfortable.)

Getting honest about what I wanted to spend my money on helped me reclarify some of my priorities, too — I have a line item for the next novel I plan to publish (no, it isn’t written yet, but I’m saving the money for it NOW), and I have a line item for charity. I have three different savings goals for vacation, business travel, and other travel. I added “home” to my True Expenses list so I could set aside money for stuff like plants and Christmas decorations and a nightlight for my bathroom.

I also figured out how to do the “estimated taxes” and the “investing/retirement” pieces: in both cases, you just divide the total amount you plan to spend/invest by 12 and make that number your monthly goal. Since I set aside a percentage of my income for taxes and another percentage for investing/retirement, some months I’ll overfund my goal and other months I’ll underfund it, but YNAB will keep a running tally of how much I still need to set aside to cover my $5,500 IRA max contribution, for example. YNAB will also keep a tally of how much money I’ve set aside for taxes, even though I only spend that money on taxes a few times a year.

So yeah, I love YNAB. I love it so much that I am going to set up a separate YNAB for The Billfold, to keep track of how much runway we have and how future expenses might affect that runway.

I also love the idea of using YNAB to stack up months of financial freedom. I know that isn’t what everyone’s going to use it for, but it works for me — and when I realized that YNAB could link money to time, I was so excited that I literally got up from the sofa and danced around the room.

If you want your own YNAB, use this affiliate link to get two months free.

1. We Did Good, Billfold
2. Question Wednesday
3. What I Learned From Five Years of Writing and Editing for The Billfold
4. How a Program Assistant Dealing With a New Paycheck System Does Money
5. Classic Billfold: What I Wanted From My Move to Portland and What I Got
budgetingI know that a single medical expense or accident could decimate my financial runway but I'll deal with that if or when it happensmoneytimeynab