Why I Wear the Same Halloween Costume Every Year 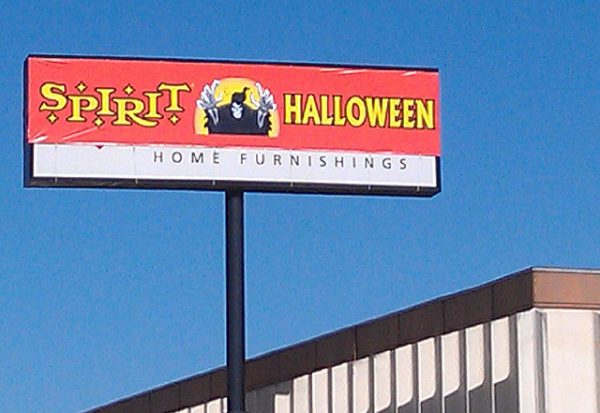 In the fall of 2008 the country was a few months into the worst fiscal crisis in a generation, and I was a few months into a very expensive master’s program. I had quit my steady, stable full-time job at my alma mater, moved across the country to Chicago (a city where I knew no one), and taken out what felt like an exorbitant amount of student loan debt to attend a master’s program in humanities. All of this was set to the soundtrack of bank after bank collapsing as the economy came crashing down.

I spent most of the fall quarter in a panic over my finances. I would glumly walk to class against the riotous foliage of autumn in Chicago and worry myself sick as I thought about how I would probably never be able to pay off my student loans. I picked spare change up off the sidewalk and went to the free food events of every club on campus, even those I had no interest in joining (astronomy club, I formally apologize), just so I could save a little on groceries. I said no to fun outings in the city with my new friends because I didn’t want to spend any money at all.

What I didn’t do much of was enjoy the experience I was going into debt for, despite the fact that I had planned and saved and worked very hard to get there. I’d spent the previous two years in a job I didn’t love, pinching pennies so that I had money for living expenses saved and would only need to take out loans to cover tuition. I studied harder than I ever had in my life to ace the GRE. I sold my car, said goodbye to my friends and family, and started over in a brand new city having never lived more than 30 miles from where I was born.

Then I received my invitation to the program’s famous Halloween party, which called for a clever and non-hideous costume. I was having a hard time fathoming spending money on something as frivolous as a Halloween costume, but I made the trek to a costume store with several friends to see what I could find. The emphasis on clever had me stumped, as did the prices of the mostly not-so-clever options I saw in the store. While everyone else was having fun brainstorming witty takes on traditional costumes, putting together props, and volunteering various clothing loans, I was wandering the aisles stressing about spending money on something that was, strictly speaking, not a necessity. As I enviously watched them, I had an epiphany.

I realized that I was making myself miserable over a done deal. I’d already quit my job, moved, and signed a new lease. The ink on those loans was long dry. Obsessively worrying about every penny wasn’t going to change any of that. This didn’t mean I should throw caution to the wind and spend money like it grew on trees, but I could stand to loosen up a little bit and enjoy my time in graduate school. My window for being a student again was going to close soon and I should make the most of it while I could.

As it dawned on me that I could choose to look at my current financial situation in another way, I literally began to see the pre-made costumes around me differently. The farmyard animals section spawned “lipstick on a pig” for one friend (it was, after all, the fall of 2008) and a selection of glittery unicorn parts became a Lisa Frank notebook for another. As for me, I finally decided on a costume that was witty and perfect for my personality. I bought a standard bee costume and took it home to put my own twist on it. Cardboard from leftover moving boxes became a sign that said “Scripps National Champion, 2008” and letters of the alphabet that I pinned to my costume. I borrowed a small pocket dictionary and used it to quiz people throughout the night. I had transformed myself into a spelling bee. I had also transformed myself into someone who was finally having a good time on the adventure I had chosen.

That night I met a man who complimented me on my costume choice as I tested his spelling ability, and he asked me for my phone number. The next year at Halloween I had graduated from the program and was beginning to pay off those student loans, so I pulled the spelling bee costume out of storage and decided to recycle it for the sake of sentimentality and thrift. The year after that, I officially made it My Thing. I wear the bee costume every year, and will continue to do so until it literally falls apart (we’ve already had some close calls). Most years it’s a spelling bee, but it’s also been a killer bee and a queen bee, and other suggestions are welcome and appreciated.

I wear the same costume each Halloween for several reasons. First, it’s what I was wearing the night I met my husband. Second, it’s a good reminder for me that money is a tool, not something to be afraid of. Third, it allows me to be thrifty by reusing the costume while reminding myself of a time when I almost let my extreme thrift ruin something I really wanted and worked very hard to get. And finally, it has become my calling card, and everyone knows that each year, I’ll be the one in the bee costume quizzing people on their spelling abilities and reminiscing about the fall of 2008.

A grant writer and personal finance fanatic, Marisa Bell-Metereau is an avid traveler who lives in Pittsburgh, PA. When she’s not reading or writing for work or play, she enjoys running, thrifting, and searching for the most authentic Mexican food in the city.

1. We Did Good, Billfold
2. Question Wednesday
3. What I Learned From Five Years of Writing and Editing for The Billfold
4. How a Program Assistant Dealing With a New Paycheck System Does Money
5. Classic Billfold: What I Wanted From My Move to Portland and What I Got
costumeshalloweenholidaysspooky money