Did We Successfully Reduce Our Grocery Spending? 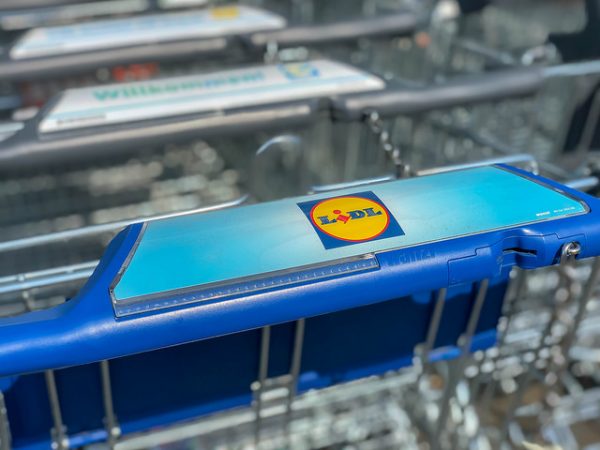 In my original article Our Average Grocery Spending and What We Hope to Change I came up with a method of finding out whether my partner and I spend too much on groceries by laying out a plan to review our spending for two months. In the first month (mid-July through mid-August), we spent as normal. I reviewed all our receipts and calculated our four biggest spending categories to see if there were areas in which we could save money. Then, in the second month (mid-August through mid-September), I applied some of my ideas about reducing our costs in those areas to see if it could make a difference.

Now that the review process is over, I’m back to report on how we did and what conclusions we can draw from this, with the help of my trusty “SUMIFS.”

The first two questions I asked were:

In response to question 1, we did make savings overall:

July-August, however, was an expensive month compared to our average grocery spend for this year, so it shouldn’t really have been difficult to spend less than this — we usually do. Happily, we managed to underspend compared to that as well.

As far as we were concerned, there was no discernible difference in quality, apart from one notable bad experience with a can of corned beef!

Objective 1: Reduce the overall cost for each top spending category compared to July-August.

Objective 2: Reduce the average cost per meal for my lunches and our evening meals (as overall cost may go up if we have more meals covered by this month’s budget).

We made savings in the top 3 categories as planned:

We made a saving, but not where I’d intended.

Alcohol objective 1: Buy less wine — we failed quite miserably here. We bought 11 bottles of wine in August-September, compared to 10 in July-August.

Alcohol objective 2: Buy cheaper wine — this was marginally more successful. The average cost per bottle was £5.21 compared to £5.49. But that wasn’t enough to make the overall cost for wine lower.

The actual savings came from buying fewer bottles of craft beer. We only bought 3 bottles for £5 instead of 13 bottles for £21.75 (same average price).

However, monthly wine and beer totals for both months point to a single root cause — socializing. The craft beer in July-August was for a BBQ party with guests and, in August-September, 6 of the 11 bottles of wine were purchased over the August Bank Holiday weekend (24-27 August) when several family gatherings took place. As a proportion of our overall spend, alcohol went up from 26 percent to 33 percent in August-September. In more social months (e.g. December), our willingness to cater for others might end of costing us a lot more. So, in the future, if we want to keep control of our spending on alcohol, we need to:

I didn’t buy cooked meat for lunches at all this month, so this was successful. Instead I ate more eggs, cheese, and leftovers.

The saving in the cooked meat sub-category would have been £7 rather than £3.70 if the cheap can of corned beef I bought hadn’t been completely unopenable and/or I had found that out before I started cooking the rest of the meal which meant that BB had to pop out to the local co-op to buy an expensive replacement.

We also made savings across most categories:

Fruit objective 3: Buy from cheaper stores (if the “best before” dates are okay)

This was probably the easiest task. We made sure we prepared the fruit ourselves at home. I also swapped from shop-bought fruit pots to plums for my post work-snack. I did more (but not all) my fruit shopping at Aldi which had the best “best before” dates and pricing.

The objective here was a more vague “buy less fizzy pop” and we somehow achieved it. I think this is the category where the Hawthorne Effect (behavior is altered because it is being observed) was most evident as I definitely didn’t buy soft drinks when I normally would have, rather than substituting for other options. BB hasn’t complained yet though!

Our savings this month look quite impressive but what if we just spent the money elsewhere — maybe we just ate out every night and moved the spending to the “going out” budget instead?

As the table below shows, we did eat at home less in August-September (and we did actually over-spend on our going out budget — socializing again!) but the cost savings were not entirely down to that and we did manage to bring our average costs down:

As the pie-charts show, we were able to shift away from Tesco to do more spending on cheaper shops. 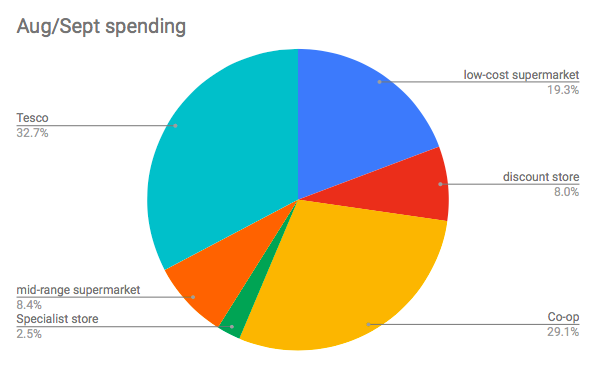 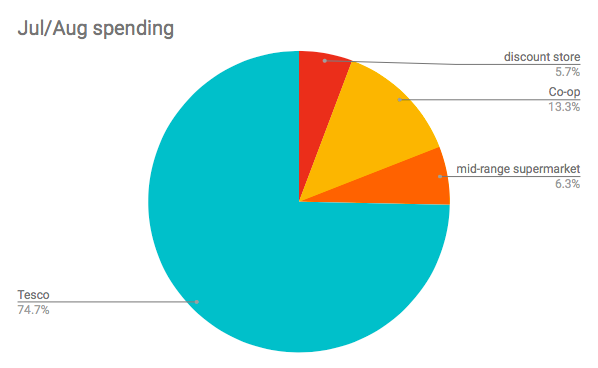 This did take some coordinating as it involved more trips to the shops (three in one day once!) as we learnt what to go for where. Also, I defaulted to Tesco as the easy option during the August bank holiday week as we were very busy. But I anticipate that over time we will start to plan better and shop more efficiently. As an aside, we mustn’t be the only people moving away from Tesco, as they have now opened a new type of store to directly compete with Aldi and Lidl.

We were able to save enough on the monthly grocery bill to make a saving, not only against the previous month but also against our monthly average of £315, without affecting quality or enjoyment. I am pleased with our saving against the average of £40/month, which equates to £480 a year! I don’t believe that we would necessarily keep the total as low as £275 every time, particularly if we eat at home more (or the fizzy pop spending sneaks upward again), but if we can reduce the monthly average spend to £300 or below, we could feasibly save enough to “reinvest” in the groceries budget to cover months where our grocery costs are likely to be high (e.g. Christmas, August).

The biggest issues have been:

The impact of both of these should reduce over time as we get used to it. We could could probably save more if we made further modifications to our habits and meal plans, but without external pressures to do so (a squeeze on our finances), we are unlikely to be motivated to do this. Switching shops has been a big factor but just an increased general awareness of pricing has made a difference.

Ultimately, though, this review leads back to the original motivation for attempting this exercise, to review and try to understand whether BB and I spend “too much” on groceries. I’m happy that the review has prompted some reasonable, sustainable savings which will be beneficial in the long term. But it’s also made me think more realistically about my attitude towards money.

As Emmkayess said in the comments of my original post: “I have it in mind that I’m losing out on THOUSANDS annually by not budgeting food better.” This is how I felt, but my case, it’s not ‘incorrect math’ that has thrown my judgement askew, but anxiety about wasteful spending. RandomThoughts’ comment of “That being said, $400/month for two people seems pretty reasonable!” reminded of this quotation about dieting from Bridget Jones’ Diary which I think gets to the heart of it:

I realized that I have spent so many years being on a diet that the idea that you might actually need calories to survive has been completely wiped out of my consciousness. Have reached point where believe nutritional ideal is to eat nothing at all, and that the only reason people eat is because they are so greedy they cannot stop themselves from breaking out and ruining their diets.

Bridget’s realization about food mirrors mine about spending on food/groceries. Everyone has to spend some money to eat (and drink, and keep the house clean, and socialize) and if you’re not buying your own food then someone else is footing the bill. Maintaining a mindset where any expense is seen as frivolous has lead to unnecessary and time-consuming worrying on my part, when my attention could be elsewhere (e.g. planning for healthy eating rather than worrying how to cost it). I feel easier popping to the shops now, both because I have a better idea of how much things ‘should’ cost and also because I don’t think our spending is unreasonable, even though we can spend less when we make the effort.

As I stated in my original article, we have no children or other dependents and are mobile in an area with lots of shops, so what has worked for us might not work for people with more limitations on time and access. But if you are worried about overspending but don’t feel you have a grasp on the details, a review might make you feel better, even if you find you don’t need to spend any less.

Louisa Bhaer (not her real name) works in marketing and spends far more time with spreadsheets than is probably healthy. She and BB are working on building up their Nicolas Cage film collection, one terrible DVD at a time.

1. We Did Good, Billfold
2. Question Wednesday
3. What I Learned From Five Years of Writing and Editing for The Billfold
4. How a Program Assistant Dealing With a New Paycheck System Does Money
5. Classic Billfold: What I Wanted From My Move to Portland and What I Got
foodgroceriesgrocery budget