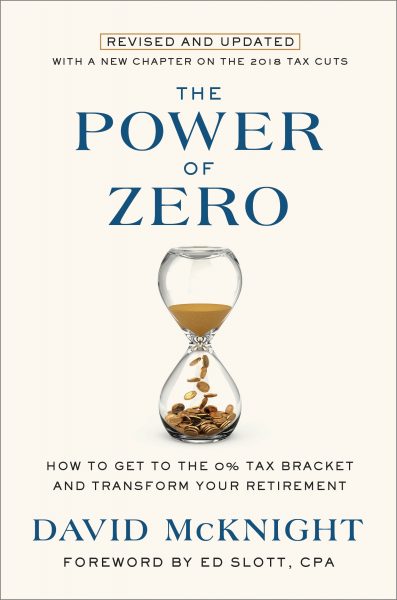 But most people don’t think about how much they’ll pay in taxes when they retire — and David McKnight wants you to know that there’s a way to pay zero taxes in retirement, if you do the math correctly.

The Power of Zero: How to Get to the 0% Tax Bracket and Transform Your Retirement was originally published in 2013; the revised edition, published this September, argues that the recent Tax Cuts and Jobs Act makes the idea of a no-tax retirement even more important. As McKnight explains:

With a stroke of the pen, our federal government inaugurated an eight-year period starting January 1, 2018, during which you will experience the lowest tax rates you’re likely to see in your lifetime. Because of the sunset clause that was built into this legislation, the tax sale ends on January 1, 2026. All Congress has to do in order for your taxes to go up eight years from now is, well… nothing.

You now have math and certainty in your corner when it comes to making a critical tax payment decision that may well determine how long your money lasts in retirement.

McKnight warns us that once the Tax Cuts and Jobs Act runs out, taxes are likely to be higher than they’ve been in any of our lifetimes, and if we put too much of our retirement savings into tax-deferred vehicles like the 401(k), we could end up losing a significant percentage of our retirement fund to taxes.

The goal, then, is to allocate your retirement savings in a way that puts you in the 0 percent tax bracket once you retire. This, in turn, ensures that your Social Security distributions are tax-free — and since it’s rumored that we’ll all get less Social Security money than we’re entitled to, why not structure our retirement in a way that gives us as many of those dollars as possible?

The answer to that question is, well, because it’s hard. You can’t just put all of your retirement money into a Roth IRA, for example, because the government won’t let you make enough Roth IRA contributions. As McKnight explains, you’re going to need multiple tax-free vehicles, including non-traditional retirement vehicles like the Life Insurance Retirement Plan (LIRP):

Am I recommending that you put all your eggs in one basket? No, I’m advocating multiple streams of income, none of which show up on the IRS’s radar. One of the reasons that we do this is because, at any point, the IRS could legislate any one of your tax-free streams of income right out of existence. By having a combination of tax-free alternatives, you insulate yourself against legislative risk.

But putting your eggs in multiple baskets still isn’t enough. You’ll need to know exactly how much you can have in each basket, how to move money from one basket to another (making a Roth conversion, for example), how to avoid “provisional income,” what to do if the standard deduction changes (which affects how much money you can have in tax-deferred retirement accounts before you move out of the 0 percent tax bracket), and more. McKnight’s book carefully explains all of the math, which is good because there’s no way I can sum it up here.

When I received my advance copy of The Power of Zero, I had the opportunity to ask McKnight a few questions about his book. His answers are below:

This really depends on your age. If you’re a few years from retirement, in a high marginal tax bracket, and you see your income dropping once you retire, you’re better off postponing any contributions to tax-free accounts. Get the deduction at your high marginal tax bracket now, then distribute it or convert when your tax rate is lower once you retire. Here’s the big problem: if you’re a 40-year old business owner, and you’re not planning to retire for another 10 to 20 years, you’ll be retiring at a time in our country when many in academia believe tax rates could be twice as high as they are today.

This plan assumes we’ll have historically low taxes through 2025. If the government changes its mind and increases taxes, should we continue to follow the plan?

It depends on how high the government increases taxes. Strong evidence suggests that neither party will be able to change the current tax law prior to 2026. To modify that law, you’d need a majority in the house, a majority in the Senate and the Presidency. Those starts are not likely to align for the Democrats prior to 2026. So, we’re left with a scenario where taxes will go up automatically in 2026, then rise dramatically as we approach 2028, 2030 and beyond. As long as we find ourselves in a rising tax rate environment, then the strategies discussed in my book make good financial sense.

As I read the book, I got the sense that we should only save enough for retirement to ensure that we’ll fall into the 0 percent tax bracket. If we have additional savings (especially money that we might otherwise have put into retirement), where’s the best place for them? A brokerage account? A CD ladder? Government bonds?

Clarification: We should only have enough money in our tax-deferred accounts (IRAs and 401(k)s) where our distributions can be offset by our standard deduction ($24,000 in today’s dollars). We can have as much money as we want in all the other tax-free alternatives (Roth IRAs, Roth 401(k)s, Roth Conversions, some forms of life insurance) because those accounts aren’t taxed in retirement. So the big myth buster here is that you can have as robust a lifestyle in retirement as you want without showing up on the IRS’s radar. You just have to make the right tax planning moves in the next eight years before tax rates go up for good.  I’m not a big fan of brokerage accounts, CDs or government bonds other than what might serve as a basic emergency fund (about six months’ worth of basic living expenses). Anything dollars above and beyond this amount should be systematically repositioned to tax-free.

After I finished reading The Power of Zero, I was very excited about figuring out how to apply the plan to my own retirement. A few days later, I had already started thinking “well, maybe I’ll do this tomorrow… or next year.” The steps are all there, but you have to figure out which steps apply to you, and then you have to do a bunch of math, and then you probably have to set up a LIRP, and then you have to continue to make adjustments to the plan over time — this isn’t a “set it and forget it” deal.

But I want to give it a try, and maybe sharing my process with all of you will hold me accountable.

Have any of you tried The Power of Zero method? Do you have any tips or advice to share? And for everyone else: are you as intrigued as I am?

1. We Did Good, Billfold
2. Question Wednesday
3. What I Learned From Five Years of Writing and Editing for The Billfold
4. How a Program Assistant Dealing With a New Paycheck System Does Money
5. Classic Billfold: What I Wanted From My Move to Portland and What I Got
billfold book reviewbooksretirementyes McKnight addresses the "but what if I feel guilty about not paying taxes in retirement" question