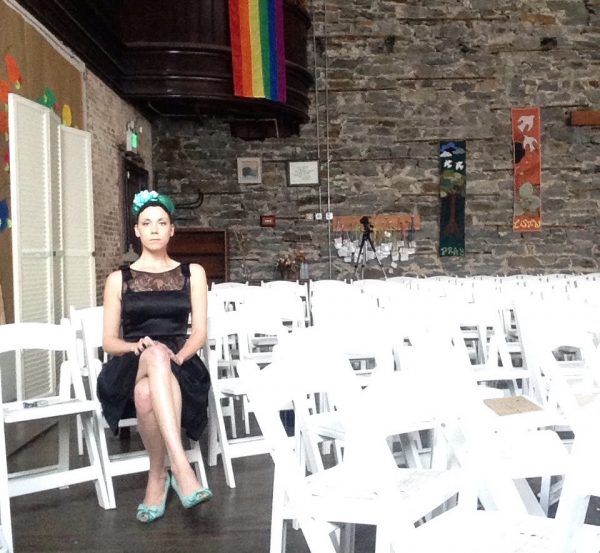 When I first joined the band, I was a little embarrassed telling people about my new gig. Coming from being in a cool, post-punk, new wave band, and another slick, cabaret-rock band, I honestly couldn’t shake the image of Adam Sandler in the 1998 film, The Wedding Singer. But I now make half my living as a wedding singer, and I got no shame about that. Being a wedding singer is possibly, by far, the best job I’ve ever had. Not only is singing “Don’t Stop Believing” to a crowd of people gathered in celebration both easy and fun, it’s made me a better musician.

We are a group of mostly jazz cats and rockers. There’s a slew of different singers and we cover songs you’d be hard-pressed to find a band out there as willing to learn. Like that really creepy and manufactured Mother-Son song that your ma saw on YouTube and insists expresses everything she ever wanted to say to you, but could never before find the words.

At the same time, if you request a list of all sad, sappy songs that pull on your heartstrings like lepers, we’ll probably encourage you to let us steer the ship straight into the party zone. The party zone is, of course, that other-worldly place where you forget you own a cellular phone because faces are melting, booties are shaking, and souls are burning with the flames of life.

The company I sing for, Bachelor Boys Band, puts on showcases at local indie music venues once a month so that brides and grooms and friends and family can come out and judge us ,  “American Idol”-like. If you’re more fond of country  —  we’ve got a lady for that. Trying to nail that Motown/soul vibe  —  we’ve got half a dozen singers that will floor you. Not to mention we’ve got a horn section that will make you wish that playing the “air saxophone” was as socially acceptable as the “air guitar.”

Once you fall in love with a singer in particular and decide to book the band, my phone buzzes. I get an email asking if I want to play a gig  —  sometimes a year and a half out  —  and if I’m not off rescuing puppies in Jamaica that weekend, I say “yes!” and everyone sleeps a little easier that night. We’re made for each other that way. On the night of your wedding, the emcee introduces you in front of a huge band fanfare and you walk into the room feeling like the most important two-some in the world, as you should. And I get paid to do what I love, and what I’m good at. This is the stuff that dreams are made of, people.

So, let’s get down in the belly of this blissful beast. When I say I make half my living as a wedding singer, keep in mind that I used to make a whole lot of money. I had a slushy salary, benefit-laden career type jobs for most of my adult life. In an effort to do what I love  —  music and writing  —  I have had to forgo some expenses, and I generally make, well, about half the money I used to. This, it turns out, is totally doable. I’m happier, yada, yada, yada — it’s basically worth every missing penny. So with that baseline in mind, and after conferring with a couple of other wedding singers I know who play in other bands, I can tell you that you can generally make a base pay of around $300-$450 per gig. Then come the add-ons.

If you have to drive really far, and often you do, you get paid more to compensate for your travel and time. I’m based in Baltimore, but I’ve played in Connecticut and North Carolina, just the same. If you sing for the ceremony, provide emcee services, double as a tuba player, whatever isn’t just singing  —  you get paid more. If you provide the PA and sound equipment, we’re talking more than double per gig. Needless to say, if you play more than one gig a weekend, you’re raking in whatever you’re making times that. Me, oh my, I love three-gig weekends. More people should get married on Fridays and Sundays. Dare to be different, folks. It’s rad! We also do corporate gigs, house parties, graduation parties, whatever. I regret that I’ve yet to do a celebratory funeral gig, but for the record  —  I want a wedding band at my funeral.

As an independent contractor, I incur some expenses along the way, most of which are tax-deductible. Mileage and gas to and from each gig  —  write it off. Use your phone, laptop and home office to book and manage gigs? Write it off. Spotify to learn tunes  —  write it off. iPad and iPad stand  —  write it off. Even if you didn’t purchase the iPad stand, or instrument or whatever, this calendar year, it’s depreciated, like any finely aged malt liquor  —  so, you should write the value off.

My little black dress apparently can’t be written off because I could technically wear it for other occasions, so when it comes to maintaining an appropriate look  —  shop at thrift stores or discounted, last-season stores, find yourself a steal, and wear that dress till it can’t be worn no-mo. I’ve been wearing the same black, satin, Audrey Hepburn in “Breakfast at Tiffany’s”-inspired dress for 40 some-odd weddings now, and she’s holding up just great.

Another added bonus to this whole situation is the food and booze. Every band member is guaranteed a meal with each gig, and although the open bar isn’t included in our contract, 95 percent of the time, we can responsibly partake in adult bevvies.

Of course, one person’s definition of a “meal” could be a loaf of wonder bread, a tray with bologna and processed ham slabbed on it, slices of individually wrapped “American” “cheese” and a family size bag of potato chips to share, as one band suffered through, but usually it’s the good stuff. We often eat what the reception is eating (can you believe it’s possible to get sick of mashed potatoes and steak? It is…), or we get what we like to call the “bandwich.” The bandwich, as you can imagine, comes in many forms. But any working musician knows it, perhaps all too well. 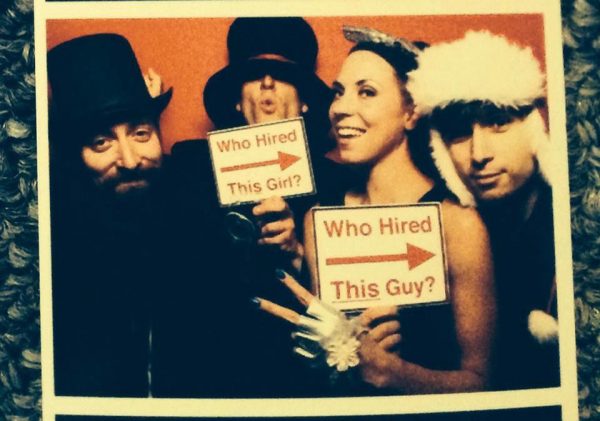 Sometimes you get tips. Maybe 30 percent of the time, you’ll get $20 per person. Even rarer is that fat hundred. Tips are not required, but appreciated.

But hold on there, karaoke queen: Being a wedding singer is easy; becoming a wedding singer is not. Oops, I didn’t mean to get overly zen here, but the truth is, the hardest part is getting ready for your first gig. A new singer has to invest a lot of time leading up to the first wedding by learning a ton of material. You may think you already know the 20–30 sort of suggested standard tunes, and you probably do because they are standards for a reason  —  everybody loves them.

But do you know what key you sing each song in? I didn’t and sometimes still don’t. Do you know how long that bridge is and when to come back in? Can you lead the band to finish a song early if it’s just not quite working for the crowd? What do you do when something goes wrong  —  you forget a lyric, you forget an entire verse  —  everyone is looking at you to take them to the chorus. Something at some point will go wrong, guaranteed. The trick is how you make it seem seamless.

How many times do you repeat the chorus in “Call Me Maybe”? A lot. Like, way more than you think. Are you gonna hit that key change in “I Wanna Dance with Somebody”? I don’t. These questions are questions you eventually won’t have to think through on a rudimentary level, but initially, you’ll spend a lot of time in your bedroom singing karaoke on YouTube to your cat, hoping your neighbors really love your voice and Adele’s songs, because they’ll be hearing a lot of it while you learn.

The second crucial talent is both learned and genetically-gifted, and that is the ability to sing for three hours. Of course, you’ll switch off every other tune with the male singer (or vice versa), but can you handle up to 25 or 30 songs belting your ass off, or is your voice going to give out a couple tunes in? You have to build stamina. These are muscles and you’re asking for a marathon when you’ve maybe put in a couple 5ks. Can you sing without being able to hear yourself? Even if there are monitors, you might not be able to rely on them.

Songs and stamina are the two things that snagged my nylons early on. I used to play a 45-minute set with my rock band and be totally, vocally wiped out. Now, I sing for three hours, get in my car, throw on some Aretha and sing along all the way home. I used to think I could only sing at night. Now I wake up, and before I’ve had a cup of tea, I’m humming a little ditty.

In short, you earn those dollars, and you work hard with the skills that you’ve acquired. You accept that you’ll never be perfect, but you do your damndest to hit that high note like never before, to try that new embellishment, to take it to another level  —  and for your hard work and talents, you get paid, pretty well, too.

See, I’m the kind of person who wants everyone in the whole world to do what they love because I think it would make us all happier and healthier and bring about much needed peace and change. I think the money stuff sorts itself out if you approach things in a steady way and are a reliable and positive person that people want to be around, and in this case  —  want to play with. And my experience, as a wedding singer, has been so positive, I’m absolutely sure that if I got a book deal tomorrow and had enough money to buy an RV and never look back, I’d still want to throw on the little black dress and rough the house up with my rendition of “Proud Mary” every so often. Because singing that song to a room full of sweaty people dancing their asses off is red hot and it never gets old.

Rachel Anne Warren is a Baltimore-based freelance writer and musician. In addition to the wedding band, she plays in PLRLS and Gunwife Gone.

1. We Did Good, Billfold
2. Question Wednesday
3. What I Learned From Five Years of Writing and Editing for The Billfold
4. How a Program Assistant Dealing With a New Paycheck System Does Money
5. Classic Billfold: What I Wanted From My Move to Portland and What I Got
jobsthrowback thursdaywedding singerweddings