The Cost of Not Canceling Our Vacation 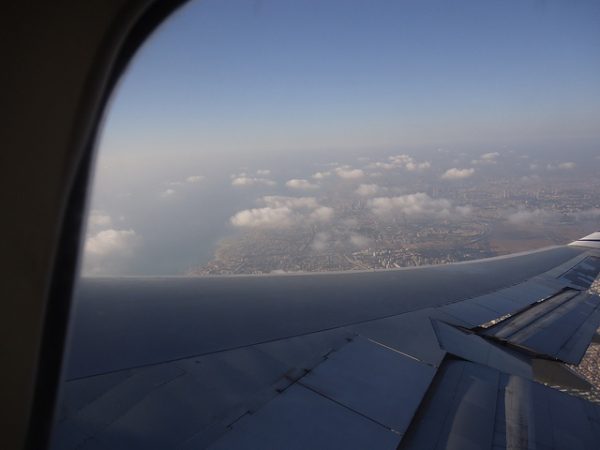 I live in Montana. My spouse’s sibling lives on the east coast. They’ve been here once in the last decade; we’ve been there never.

We like each other, we really do. It’s just that Montana is not close to anywhere. So when our very first niece was born last winter, we decided to go visit. We lucked out and found some super-cheap tickets, the completely non-reimbursable, no perks of any kind, unchangeable in any way type ($783 round-trip for two adults). My own daughter was weeks away from turning two, meaning she could travel for free on our laps. We duly budgeted and saved for the flights and other travel expenses like treats and outings, and had it covered by the time we were due to leave.

En route to the airport on an icy black January morning, said daughter threw up in her car seat. Uh oh. Then she puked a second time. Oh no.

We cleaned up and made it to the airport with no further incident. I crossed my fingers, tucked the kid into her backpack, slung her onto my back, and got in line. She threw up down the back of my neck.

I called it. We put daddy on the plane alone, packed the duffel of diapers back into the trunk, and drove home to sleep it off.

Hours later when the clinic opened, I dragged my forlorn little girl in to see the unfortunate doctor ($142) who’d drawn the short straw for weekend urgent care. He pronounced her malady a harmless virus of some kind, prescribed rest and fluids, and wrote us a note forbidding us to fly that day.

We spent the afternoon cuddling, eating frozen dinners from the grocery store, and watching one of the only bearable children’s shows in existence (the charming Masha and the Bear). I’d been running hard at work, stepping up my hours at my day job and taking on a new side gig, all of which was rewarding but exhausting. A day of no expectations whatsoever, even arrived at by unfortunate circumstances, was a special treat. For a moment, I considered staying home all week and not telling anyone I was still in town.

But I badly wanted to meet my niece, and my darling daughter badly wanted to see her beloved grandparents. When she drifted off to sleep for the night, I looked up options to rebook the next day. There were available flights that left mid-day, which would allow me to drag the kid to the clinic in the next town over that was open on Sundays and clear her for departure. The site offered free cancellation within 24 hours of booking. Given that there were only about 18 hours until the flight left, I figured I could wait until the last possible second to decide whether to actually get on the plane. I booked the flights ($616).

The next morning, my daughter was grouchy and uncomfortable, but hadn’t thrown up any more. She had a mild fever, but that was about it. We went to the Sunday clinic and both got examined ($120.18 apiece after our $4.82 in network discount) and flu tested ($115.80 each) for the safety of the six-week-old niece. Same diagnosis: obnoxious but harmless kid virus. We headed for the airport.

The less said about the ensuing flights, the better. Flying with an active toddler is challenging enough. Flying alone on a multi-connection route with a cranky, sick, active toddler is up there with lighting a no-match fire and running 13 miles on my list of things I never particularly wanted to do nor thought I could but somehow managed to accomplish.

We arrived to our destination at 2 a.m. local time after 12 hours in airports and on planes. My brother-in-law chauffeured us back to the homestead and chucked us into the guest room for the remainder of the night.

The next day we got to meet the newest member of the family — from a respectful distance. Given big cousin’s virus of unknown origin or identity, we were permitted to wave from across the room. We ate our meals from paper plates and followed a rigorous hand-washing protocol. That night, we were evicted to a local motel until our contagion level dropped ($155.40 for two nights).

Mid-afternoon our first day out of state, I noticed a bright red spot on my daughter’s cheek. Within an hour, she was covered with fingerprint-size welts from head to toe. Back to urgent care, our third clinic in three days ($153.39). Diagnosis: fifth disease, an obnoxious but harmless kid virus. In my panic about impending anaphylaxis, I didn’t think to grab any diapers from that full duffel and bring them along. Grandpa popped into the drug store and bought a pack ($0 to me, grandpa graciously covered it).

After a couple days laying around our motel watching kid television — not so unlike my zero-responsibilities fantasy after all — my daughter made enough of a recovery to venture out. We went to the aquarium, where she cautiously touched sea jellies and sting rays. We saw elephants and monkeys at the zoo. We hit up every playground in a 30-minute radius.

The kid cracked the biggest grin I’ve ever seen on her face while riding a pony at the farm where her auntie works.

Us grown-ups even managed to sneak away for a double date, courtesy of the grandparents. I picked out a unique brewery that served mostly odd farmhouse-style beers, my favorite kind to make and drink. I ate a plate of fried green tomatoes with an aioli I’m apparently still thinking about.

Later on a tour of a hushed cathedral, I was shocked to feel tears well up in my eyes as I sat in a pew and looked up at the stained glass windows, at once massive and intricate, as late afternoon winter sun lit the dark space.

By the end of the week, the biohazard control measures were relaxed enough that I finally got to hold my niece. I’ve never been much of a baby person in general, but I make certain exceptions, and this tiny dark-haired person snuggled into the crook of my arm just so and cooed in such a manner to ensure she made the list. To seal the deal, the grandparents dressed up both girls in matching striped jammies and red slippers and let the big cousin hold the little one on her lap for pictures. Seeing my daughter’s awestruck expression when she put her arms around her baby cousin completely melted my heart.

After tallying up the extra costs of not canceling my vacation, I’m still glad I didn’t cancel, at least from an indelible memories perspective — even if I wouldn’t necessarily make the same decision next time from either a financial or a health/exhaustion-level perspective.

I’m still paying off the extra medical expenses since our family insurance plan has an absurdly high deductible which we’ve only ever met the year I actually gave birth, but I can at least run those costs through my health savings account and snag the tax deduction on them. Those bills are on an autopayment plan and should be gone within the next couple months.

I had to put the rescheduled flight and unexpected motel costs on my credit card and carry it for awhile, which I felt icky about doing. It sort of got subsumed into the debt I’m still paying off from that one time I had a child and a home-destroying sewer flood in the same week.

That debt was why I’d taken on the side job, which is why I was so exhausted when trip time rolled around in the first place. So the decision to go on the trip highlighted that I’d let my priorities get skewed because of my aversion to carrying debt. It’s taken me the rest of the year to get to this point, but I’ve decided to be okay with working fewer hours and spending more time at home. It feels like I’m paying for face-to-face time with my daughter with actual money, since it’ll take longer to pay off our debt and we’ll get stuck with extra interest. But it’s more important to spend my most valuable currency — my time — on my most precious kid.

1. We Did Good, Billfold
2. Question Wednesday
3. What I Learned From Five Years of Writing and Editing for The Billfold
4. How a Program Assistant Dealing With a New Paycheck System Does Money
5. Classic Billfold: What I Wanted From My Move to Portland and What I Got
experience seriesobnoxious but harmless kid virusesparentingtravel