The Cost of a 15-Day Trip to South America 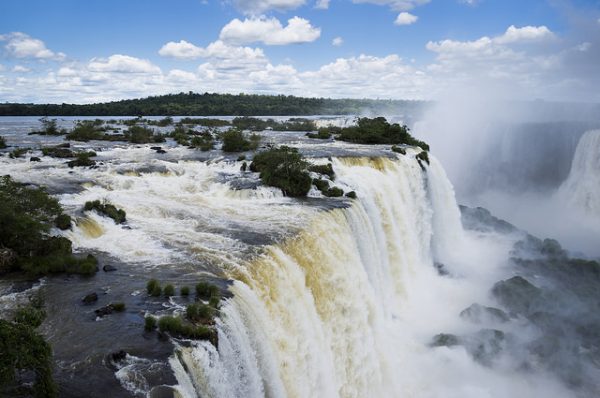 This past January, my husband and I went on a two-week trip to South America. We visited Buenos Aires and Iguazu Falls in Argentina and did a five-day hike (the W Trek) through Torres del Paine National Park in Patagonia. This is not a story about stumbling upon amazing airfare deals or subsisting on a budget of $10 per day. This is a story about two people who decided they wanted to go on a different kind of vacation, realizing along the way that while it was one of the most incredible experiences ever, it was also one of the most expensive.

Our decision to go to South America was initially prompted by my husband’s unusual vacation schedule. At the time, he was a first-year surgical resident and his hospital’s policy is that interns take their full year’s worth of vacation (4 weeks) all at once, at the hospital’s discretion. After we discovered we would be going on vacation in January 2018, we looked at our travel bucket list and immediately eliminated locations that would be freezing at that time, leaving us to consider countries south of the equator.

I’ll be the first to admit that my initial introduction to Patagonia was through the brand, not the place, but after a coworker showed me pictures of her own trip, I found myself daydreaming of turquoise lakes and bright blue glaciers. Google confirmed that the best way to experience the region is through a multi-day hike, such as the five-day W Trek. Despite not owning hiking boots and never having hiked more than two hours at a time, my husband and I looked at each other and said, “Let’s do this.”

We decided to spend two weeks in the Southern Hemisphere, starting and ending in Buenos Aires, with side trips to Iguazu Falls and Perito Moreno Glacier in El Calafate before making our way to Torres Del Paine National Park. We booked the trip knowing that we’d be traveling during peak season to a remote part of the world and we’d have to purchase quite a bit of equipment to be prepared for the W Trek.

Here’s roughly what we spent on the trip:

Flights from New York City to Buenos Aires: $2,500. Traveling at peak times = peak prices. January is in the middle of Argentina’s summer and one of the most popular times to visit. I almost cried when I saw an email from Scott’s Cheap Flights the other day advertising round-trip flights to Buenos Aires for $565 (albeit during off-peak months).

Travel from Buenos Aires to Iguazu Falls to El Calafate and back: $1,500. We decided to do the W Trek during the second half of our trip to give ourselves some cushion in case we had a hard time getting to Patagonia. This ended up being a wise decision as we lost the first two days of our trip due to the ridiculous bomb cyclone that hit New York City on the day we were supposed to depart. It’s not easy to get to Patagonia in the first place: from Argentina, most people catch a flight from Buenos Aires to El Calafate (3 hours). From there, you have to take a 3-hour bus ride to Puerto Natales, and then take another 2-hour bus ride to finally get to Torres del Paine.

Lodging in Buenos Aires, Iguazu Falls, and El Calafate/Puerto Natales: $600. Airbnbs in Buenos Aires were plentiful and dirt cheap, but we did hotels and hostels for the rest of the trip. We booked through Hotels.com so we could redeem a free night and earn points towards future free nights. We should have spent a little more money on our hostel in Puerto Natales, which was truly awful due to the paper-thin walls and the guy upstairs who sounded like he was walking around in chains.

Day trips: $250. Admission is required to get into the park containing Iguazu Falls and, to actually see the falls up close and personal, it’s best to book a spot on a boat tour. (Our wisest financial decision was deciding not to shell out an extra $350 each to get Brazilian visas just so we could see the falls from that country’s side.)

Visiting Perito Moreno Glacier in El Calafate also required a bus ride and admissions fee. We paid extra for another boat tour so we could get as close as possible to the glacier and watch huge chunks of ice plunge into the water.

The W Trek: $2,500. The most cost-effective way to do the W Trek is to camp and schlep all of your stuff with you. If you don’t want to camp, you can try to book a bed in the refugios (mountain hostels), which are near the camp sites and offer warm beds in rooms with 2-6 roommates, hot showers, and meals. Both of these options require a lot of coordination, as you need to be able to book the individual campsites/refugios you need as you progress along the trail. There’s not exactly a 1-800 number you can call with a booking assistant readily available to to help you.

The less cost-effective option is to do what we did and pay a tour outfitter to coordinate all the logistics for you. We told the outfitter which days we wanted to do the W Trek and they told us whether there were available spots in refugios for us. They also handled all the paperwork, entry/exit fees, and bus transportation into/out of the park.

Equipment: $1,700. We had to buy a lot of stuff for this trip. The most important items were also the most expensive: hiking boots and high-quality socks, Gore-Tex windbreakers, and 40-liter backpacks. These items comprised roughly 65 percent of the equipment cost. I didn’t understand why Gore-Tex jackets were so expensive until we found ourselves at the top of the ridge, with 50 mile-per-hour winds and sideways rain pummeling us from every direction, yet somehow we remained dry.

The remaining 35 percent was spent on a variety of other items, like hiking pants, trail mix (which I’m never eating again), and toiletries. The one thing we didn’t buy prior to the trip were hiking poles, which we originally dismissed as tools for overly cautious hikers. We soon noticed, though, that every person headed down to Patagonia with us was carrying poles. In a panic, we bought two cheap poles, one for each of us, and we regretted not buying higher-quality poles as soon as we started hiking. There were incredibly steep ascents and descents, and when you are carrying a 30-pound backpack, you want all the stability you can get.

Travel insurance: $300. We had never purchased travel insurance before, but given the cost of the trip as well as how active it would be, we felt this would be a wise purchase. What if our flights get screwed up? What if one of us breaks a leg on the trail and has to be airlifted out? The insurance ended up paying for itself when we lost the first two days of our trip due to the aforementioned bomb cyclone. While it took a while to get our claim processed, we were reimbursed for the nights we missed in our Buenos Aires Airbnb as well as the food we ate at JFK while waiting for our flight to take off.

Food, souvenirs, and other miscellaneous items: $950. We bookended our trip with two really excellent, though pricey, steak dinners in Buenos Aires. Still, for the quality of the meat and the wine we consumed, we felt it was a steal compared to NYC places like Peter Luger. While meals were included as part of our W Trek package, extras like alcohol or candy were not. We may have purchased a $35 bottle of Malbec just to calm our nerves after a particularly stressful day on the trail, but at least we didn’t buy the $11 Snickers bar.

All in all, we ended up spending a little over $10,000 on this experience. We funded the trip through a combination of savings (35 percent), the majority of my year-end bonus (60 percent), and credit card points (5 percent). Could we have gone on a cheaper vacation? Absolutely. Are we privileged to have even been able to consider such a trip, let alone act upon it? Yes. Was it wise to spend this much money considering we have six figures of combined student loan debt? Probably not. But the chance to do something once in a lifetime, when we are young, healthy, and have relatively few responsibilities (no pets, kids, or mortgage) outweighed the practicalities.

Looking back, we definitely made a few decisions that were fueled by FOMO: if we’re already going to be in Argentina, why wouldn’t we stop in Iguazu Falls? Would it really be so terrible to do a side trip to see Perito Moreno Glacier instead of just going straight to Torres del Paine?  I’m glad we did it, though. It was humbling to be amongst the waterfalls in Iguazu, covered in mist and barely able to hear each other talk amidst the roar of the water. In Patagonia I saw colors that I didn’t even know existed as I hiked uphill for longer than I previously thought I was capable of doing. And the Malbec at the end of the day? Worth the price of the trip.

Margrit B. lives in New York City and looks forward to planning a true budget vacation in 2019.

1. We Did Good, Billfold
2. Question Wednesday
3. What I Learned From Five Years of Writing and Editing for The Billfold
4. How a Program Assistant Dealing With a New Paycheck System Does Money
5. Classic Billfold: What I Wanted From My Move to Portland and What I Got
experience seriessouth-americathe-cost-of-thingstravel