My First Suit Was a Thousand-Dollar Mistake 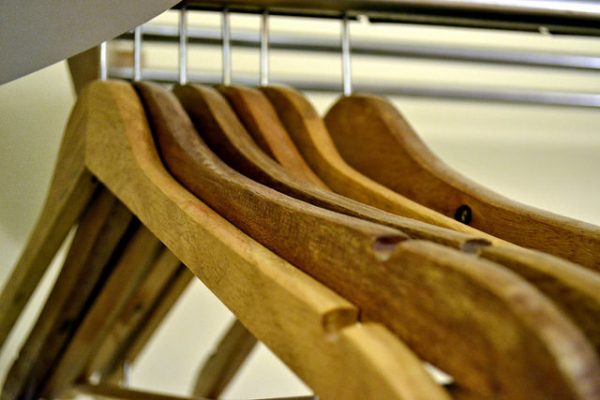 I didn’t look like a customer, but I was. I was there to pick up one of the most expensive things I had ever bought. It was August in DC, and I had sweat through my T-shirt on the way to this fancy store full of fancy people. “Do you want to try it on?” the clerk asked. I didn’t. I was out of place, and I wanted to get out of there as soon as possible. I took my thousand-dollar suit and got on the bus.

Many of my summers in college were spent working with my Dad on the hot rooftops around Denver, so it wasn’t the heat that bothered me. I had recently finished my master’s degree and was sleeping on a friend’s couch in DC while job-hunting. Most of my ideas about “office work” came from movies. While I was pretty sure I wouldn’t be yelling “BUY! SELL!” into different phones at the same time, I couldn’t rule it out. The one thing I did know for certain was that I needed a suit and tie.

I had saved every credit card point I had earned throughout grad school and chose a $500 Brooks Brothers gift card as I left Colorado. I couldn’t tell you why I picked Brooks Brothers. I had some vague idea that it was “nice,” but if you had asked me, I couldn’t articulate what that meant. I’m not even sure there was a single Brooks Brothers in my home state at the time.

Everything about the store was shocking. $500 men’s shoes. $200 wallets. The pants on the rack weren’t finished at the bottom. The people looked strange, like they belonged on television or something. I went in thinking my gift card would cover me. I knew immediately I was wrong, but I couldn’t walk away.

The salesman knew he had a live one. “This is our entry-level suit. Do you have ties? Oprah says our no-iron shirts are must haves.” He didn’t tell me anything untrue, but my sales resistance was low. I didn’t want to seem like I couldn’t afford it. By the time I left, I had bought three $90 shirts, two $80 ties, and one $1,000 suit. My survival cushion was down to $9,070.

I never knew my Dad to wear a suit. At the church we went to, only the pastoral staff wore business attire. There wasn’t really anyone in my life to sit me down and explain some high-level basics about the kind of clothes you dry clean. I knew that suits were “expensive,” so when I had gone to Brooks Brothers as my first order of business in starting my new life, everything seemed quite reasonable. Chestnuts like “you have to spend money to make money” helped steel my resolve to spend a tenth of my savings — even though that savings had to last until I found work or returned back to my parents’ home in disgrace.

But a smart guy in a new suit, that’s the guy that gets the job in the movies. I still expected positive interviews to end with a brusque and bold “you’re hired!” If things went really well, maybe I’d also hear about my moxie.

While I was interviewing, everything seemed fine. I was speaking to a lot of men in their 60s whose suits looked a lot like mine. When I finally started working, I knew something was wrong. My parachute-like shirts were so different from my coworkers’ that I never took off my blazer. No one else’s pants were cuffed or pleated. My $80 tie was too wide.

Over drinks one evening, when the subject of menswear came up, I let slip that I was putting off buying another suit because money was tight and I didn’t have a thousand dollars to spend. My friends were incredulous. “What? THAT suit cost THAT MUCH?” The gentle ribbing that followed bruised my ribs.

Privilege can mean having access to information about how the world actually works. There is no guide that will tell you everything you need to know — often, you have to find out from other people. So I decided to figure out where my peers were getting their clothing. I complimented a colleague on how he was dressed one day, and was brave enough to ask how much it cost. “Banana Republic. $300 on sale.” A woman I dated had once worked at J.Crew; she taught me how long sleeves should be and graciously went shopping with me. I became familiar with stores I had never heard of and styles I had never known I should wear.

It’s been over a decade, and I’ve never spent more than $300 on a suit since. That Brooks Brothers suit sits in my head like the first liquor that makes you puke all night: the sight of it makes me sick, though a little nostalgic for my youth. At least now I’m more fashionably dressed.

Paul Mahler is a data scientist working in Boulder. He misses dressing up to go to work.

1. We Did Good, Billfold
2. Question Wednesday
3. What I Learned From Five Years of Writing and Editing for The Billfold
4. How a Program Assistant Dealing With a New Paycheck System Does Money
5. Classic Billfold: What I Wanted From My Move to Portland and What I Got
careersclothingclothing seriesjobslife-lessons