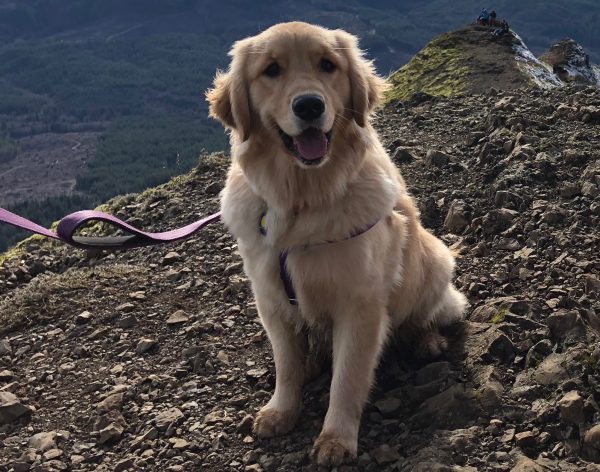 Devon (not her real name) is a 32-year-old credit union branch manager in Portland. She did a previous Doing Money interview, “How a Bank Manager With Three Roommates Does Money,” in 2015.

Hoo boy. Well, I moved in with my boyfriend in Chicago in 2016. That changed a lot of the way I managed money. Then we got a dog in early 2017. We lived together in Chicago for just over a year before moving to Portland, Oregon in September of 2017.

I’m going to ask you about how your relationship to money changed, but first: what kind of dog????

She is a golden retriever. 🙂 My boyfriend grew up with them and had been dreaming about a golden girl of his own since he was very young. It was actually something we talked about early on, since it would have likely been a deal breaker for him if I wasn’t a dog person!

Me too! I had always had small dogs, but the big ones are better snugglers.

And goldies are so friendly! And loyal. They’re like the perfect dog, if all the other dogs weren’t also perfect.

But back to money! How did the way you “do money” change after you moved in with your boyfriend?

Not too much, actually. We split expenses evenly since our salaries are similar. In the beginning that was lots of trading off at restaurants and many Venmo transfers. In January of last year we opened a joint credit card and that’s when it started to feel like a shared household. We talked early on about what purchases should go on the card and which remained personal expenses. We haven’t had to revisit it since. It’s worked out really well.

The biggest change was setting goals as a couple rather than individually. We bought a couch together on a zero-interest store card and paid that off together. Then we saved for our puppy together. Now we’re still saving for her since she isn’t pulling her own weight. She’s cute, but no Instagram sponsors yet. 🙂

Getting sponsors isn’t easy! Ask me how I know, LOL.

Ha! I’m thankful for the work you’re doing with The Billfold 2.0 and I know other ‘folders are too.

The downside is that state taxes are much higher in Oregon than in Illinois. I was making a bit more before moving, but the work life balance and stress I left behind wasn’t worth the money. Credit unions vs. banks is something you read about a lot on the consumer level, but it also extends to the employees.

So you’re happier in your current job than you were back in Chicago?

Absolutely! I have more focused responsibility. At the bank I wore so many hats that I never felt like I was doing any role well. Here my role and workload is more manageable. I’m focused on my employees and our members (they’re not customers at a credit union since they own a share in the collective).

And management supports that with more than lip service. We chase way fewer unreasonable numbers at the credit union.

I’d love to talk about credit unions, but I’m going to stick to your finances for now: how have your expenses changed over the past few years? What’s gone up and what’s gone down?

Of course. Our rent went down and we have a way nicer place. We paid $1,950 for a 2 bedroom 1 bath in a very old building without central air in Chicago. We loved it and loved the neighborhood. Here we pay $1,765 for a 2 bedroom 2 bath in a brand-new building with amenities along the river. Utilities are comparable.

We ditched cable when we moved in together and have recently ditched our alternative, Sling, as well. We watch Netflix and I watch Jane the Virgin and Crazy Ex-Girlfriend for free via the CW app. Ditto Scandal on the ABC app. I deleted the Twitter app from my phone a while back, and the added bonus of that is I don’t need to worry about spoilers so I can wait a few days for the episodes to be available in the app.

The biggest increase in spending is our dog. She’s the largest slice of the pie behind rent and student loans.

I set up a few extra personal accounts for myself as well to make sure that I stayed active after the move. I haven’t made many friends yet, but I’m not letting that stop me from being social. I set up a separate savings account for “tickets.” I use this for actual event tickets, but also things like buying books at readings. Since moving out here I’ve seen John and Hank Green, Crazy Ex-Girlfriend Live, a comedian, and a few author events including Meaghan O’Connell. Her book is brilliant, by the way.

But wait, you told me [when you emailed requesting the interview] you had some shocking numbers regarding your dog. How much do you spend on your golden retriever?

We spent close to $10,000 in the first year. This year we thought that was behind us, but it’s been averaging $1,000 each month. This is combination of walkers, day care, food, and vet bills. Those make up the majority of the spending.

We joked with the vet that we should have had a bingo card for all the illnesses she got this year. If anyone had bronchitis, pneumonia, free space, giardia, ear infection. You win!

This one did. Young dogs aren’t supposed to get pneumonia either, but she managed. And giardia is really common in the PNW due to the wet climate.

Oh for sure. I hope the summer is a little better for your doggo!

Me too! She’s on a new diet ($$$) so I’m hoping that helps in the long run. The thing about golden retrievers, or at least ours, is that they don’t want you to see them sick so they try to hide their symptoms. Now that we’ve learned this, we take her to the vet at the first sign that something is off.

You are good dog owners.

So… if I were to interview you again three years from now, what would you like to be able to tell me about your financial situation?

That’s a great question! Three years from now I hope that boyfriend and I are both at the next level in our careers, that we have saved enough for a down payment, and that we are planning how pup will adjust to having a human baby around.

You should show your dog one of the many many movies about that exact scenario!

I will. She loves TV and people-watching.

Finances are so personal, it’s hard to give sweeping advice. I will say check out your local credit union. They have all the bells and whistles of the big banks, pay much better dividends, and their employees are likely very happy.

1. We Did Good, Billfold
2. Question Wednesday
3. What I Learned From Five Years of Writing and Editing for The Billfold
4. How a Program Assistant Dealing With a New Paycheck System Does Money
5. Classic Billfold: What I Wanted From My Move to Portland and What I Got
dogsdoing-moneyinterviews