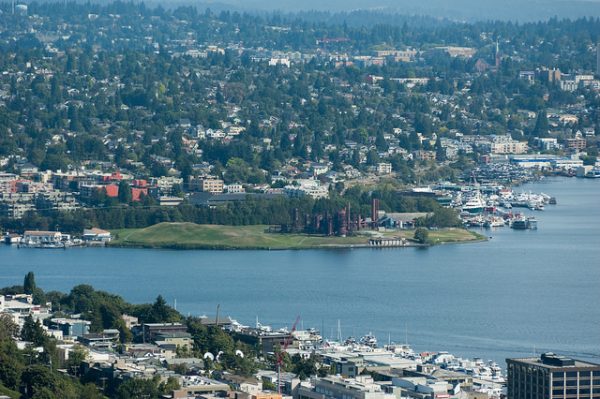 I’ve been in Seattle for just over 48 hours, and although there are some parts of it that reminded me of what I had left behind — the trees packed too closely together to count, the way Hugo House smells like old paper and wood and the tub of Softsoap Coconut and Warm Ginger in the restroom — I’m not at all sad I left.

Part of the reason could be that I’ve spent roughly seven of the past 48 hours getting from one place to another. (Last night I taught a class that started at 6; I left my hotel room at 4:30, and it took 90 minutes to travel seven miles.)

But it’s also this feeling I had, almost immediately after arriving: this city doesn’t care about me. Which, obviously, it wouldn’t; it’s a city, not a person — but as I rode the metro and then the bus and then walked, earbuds in and eyes open, I kept seeing places where I didn’t belong. I wasn’t like the university students who sat next to me on the metro and talked about everything they planned to do over the next four years. I wasn’t the young person coming out of the dilapidated Capitol Hill apartment — although I had been that person once — and I wasn’t interested in buying any of the clothes or records or copper-bottomed cookware I saw displayed in any of the shop windows.

And Seattle doesn’t care whether I buy any of that stuff or not, because they have plenty of people to pick up my economic slack — and if one retailer fails, another one will take its place. (It was a shock to see how many storefronts had changed, in just six months.) The point isn’t whether we buy the records, after all; it’s whether the record store pays the rent.

On the subject of rent: in addition to new retailers and restaurants, I saw so many new apartment buildings. All of them, assumedly, out of my price range; one advertised a “giant pool!” I can’t imagine moving to Seattle the way I did in 2013 and doing any of the things I did in those four years: paying off my debt, building up my savings, living on 50 percent of my income. The $675 I paid for a studio in 2013 now gets you a bedroom in a group house (or the chance to sleep in a living room), as well as the opportunity to use a 42-foot boat for “pleasure purposes.”

So… okay. I’m getting older, and I want to live in a community where I can afford to fully participate. You could say that I just want to live in an apartment that has a washer/dryer in-unit and doesn’t have mold, but it’s more than that. I want to live in a city that not only has space for me, but also values my contributions. If you’re subscribed to my TinyLetter, you might remember the installment where I wrote about going to Cedar Rapids’ annual EcoFest and getting recruited to play an oak tree in this family-friendly demonstration about threats to local foliage. I hadn’t even been living there half a year and it was already, like, “Nicole’s here, she can do it.”

I was curious whether I’d miss Seattle, or feel nostalgic about the whole thing when I returned, but I don’t. It feels too big and crowded and expensive and indifferent. Still, I’m glad I got to live in Seattle for a while, because I don’t think I could have gotten as far in my career if I’d started it further away from a major city. (One of my biggest non-Billfold freelance clients is based in Seattle, for example, and I used to cover local events and conventions for various publications.) There’s a time when it makes sense to be the young person in the terrible apartment taking 90 minutes to travel seven miles, and there’s a time when it makes sense to move on.

1. We Did Good, Billfold
2. Question Wednesday
3. What I Learned From Five Years of Writing and Editing for The Billfold
4. How a Program Assistant Dealing With a New Paycheck System Does Money
5. Classic Billfold: What I Wanted From My Move to Portland and What I Got
movingseattle