The Cost of Fixing Something When It Breaks 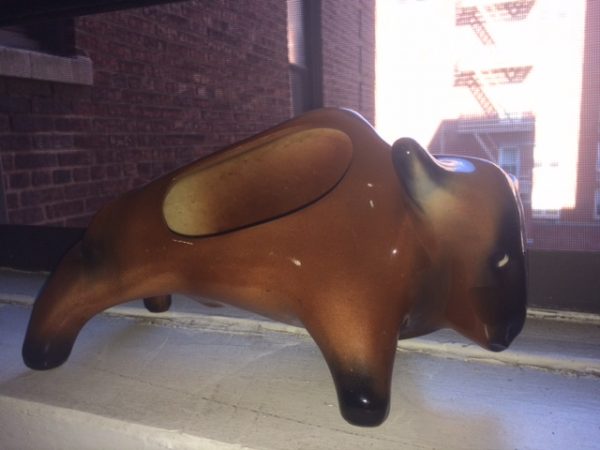 It was the middle of the night. We were sweating in the Brooklyn summer heat, and my boyfriend decided to turn on the freestanding fan we had in the room. Unfortunately, the setting was on high — and the wobbly base of the fan, mixed with the sleepy maneuvering of the machine and the sudden force of the blades, caused the fan to briefly redirect its wind towards my boyfriend’s bookshelf.

In the mere seconds it blew in that direction, it managed to knock over a poster that had been leaning on the top of the bookshelf, breaking the frame and causing it to scrape all the little knickknacks sitting on the top of the shelf onto the floor. Those knickknacks also pushed other items on display over, including a Star Wars figure, a couple of Polaroids, and, most regrettably, the bull.

There was a loud crash, officially waking us from our half-sleep states. Josh’s eyes were especially wide when he realized that his stuff was damaged. The Star Wars figure’s arm was detached, the plastic frame on the poster was contorted, but nothing upset Josh as much as seeing the bull, whose foot had split off, exposing the white ceramic beneath the brown glaze.

I hadn’t taken much notice of the bull, a painted brown ceramic sculpture with an inexplicable cavern in its side, presumably to hold something — but what, no one knew. Josh had brought over a few decorative artifacts from his childhood home: a heavy panther statue he had bought from a charity event when he was in school, the wooden figure of an Asian man leaning against a lamppost that his uncle had given him, and lots of toys and action figures. But the look of despair as he stared at the bull immediately showed how important it was to him.

“I thought maybe this would be something I would pass on to my kids,” he said at one point, ranting every few minutes about the freak nature of the whole thing and how something as simple as turning on a fan had ruined something he loved. “Why can’t we seem to catch a break?”

In the face of disaster and chaos, I tend to go into action mode. While Josh tried to process the chain of events that led to the bull’s severed foot, I started Googling businesses that did antique restoration in New York City. My original idea was to do the repair ourselves with some super glue, but message boards discouraged me — if you incorrectly attach a piece, it could make it impossible for a restorer to properly do the job later.

Many of the sites that popped up boasted their ability to repair ancient artifacts, Tiffany lamps, and other incredibly lavish items. Not only did the bull probably not fit that bill, but we definitely didn’t have the money on hand for such an expensive emergency service. Plus, a lot of the businesses required mailing the pieces in, which meant additional costs and the nerve-wracking trial of putting the beloved bull in the hands of the postal service.

I was able to put us both to bed that night after finding a restoration business across the street from my office in Manhattan. I wrapped the bull in paper and put it in my purse, delicately wrapping his foot separately. I would go in the next day for a consultation and see if we could get the piece looking good as new.

The restoration company I rushed to on my lunch break was in an unassuming building that housed many different businesses behind dark blue doors. I rang the bell when I got to the door and waited patiently for someone to come. By the time an older man opened the door, another customer had queued up behind me, also waiting to be let in.

The shop was dark, with a few glass cases housing what looked like very old antiques. The man sat behind a large desk and brusquely asked me why I had come. I pulled out the bull, suddenly feeling very out of place, blabbering on about the events that led to the loss of limb. The man put on some magnifying glasses and held the piece under the light, studying it carefully and clearly not listening to me.

Sheepishly, I told him I’d have to think about it, and he gave me a look of surprise. I clumsily wrapped up the bull and his foot and rushed out the door.

We didn’t have almost $300 just sitting around. If we had, we would’ve used it towards buying an air conditioning unit for our bedroom and perhaps avoided this whole thing to begin with. At the same time, who could put a price on a memory, on the opportunity to recapture the relic my boyfriend had preserved from his grandpa and his childhood home? I tried to do crooked math in my head to make the numbers add up, but I couldn’t.

Then I remembered another listing I had seen online for a well-rated antique restoration business uptown. I hopped on the subway and found myself in another office building, ringing another doorbell. This time, a woman greeted me warmly and brought me into the office, which I can only describe as an opulent-looking living room. Huge vases and other figures and displays lined the walls. She motioned for me to sit on the couch, while she sat in an armchair.

I showed her the bull and she studied it carefully. I braced myself for her official price quote.

“Maybe 60s or 70s,” she said, eyes not leaving the ceramic sculpture.

“I think it was maybe made in the 60s or 70s.” She looked up and smiled, then motioned to the concave section of the bull. “I wonder what this was for.”

I explained to her what had happened, admitting that I don’t think the piece was of any significant value. She nodded vigorously.

“Sometimes it’s the things that aren’t as valuable that mean the most to us,” she mused, relaying a story about her husband and a crystal sculpture he’d pay any amount of money to keep intact.

When I asked about cost, she admitted that doing a full restoration job would be pricey. They would have to clean the whole piece (it had developed layers of grime over the years) and then adhere the leg back on. Then it would need to be painted and fired in a kiln.

However, she pointed out, the break was a relatively clean one and she could just clean the piece and affix the leg. The evidence would be a hairline fracture, at worst, and she promised to try to fill in with paint wherever she could. The price for this simpler repair would be $75 cash.

I walked out of the place feeling like a weight had been lifted from my shoulders.

A week later, the bull was back in my possession, his foot successfully reattached. He was lighter in color — years of dust and stains had been lifted from his glossy exterior. His foot was solid, steady.

To the untrained eye, there was no evidence of the freak accident. Josh, with his ever-observant eye, still could see the small line where the leg had been severed, but he knew this was the best we could do for now. The woman at the restoration company had said that even if we wanted them to do a more intense repair job they still would’ve had to reattach the leg before starting the painting and firing process, so we could also always bring it back someday and have it fully gussied up.

But for now, we were whole again. Slightly shaken and scarred, but whole. And that was all that mattered.

Kimberly Lew still doesn’t know why the bull has the hole in its side. The best theory she’s heard so far is that it’s to hold a pack of cigarettes. www.kimberlylew.com

1. We Did Good, Billfold
2. Question Wednesday
3. What I Learned From Five Years of Writing and Editing for The Billfold
4. How a Program Assistant Dealing With a New Paycheck System Does Money
5. Classic Billfold: What I Wanted From My Move to Portland and What I Got
life-lessonsrepairsthe-cost-of-things