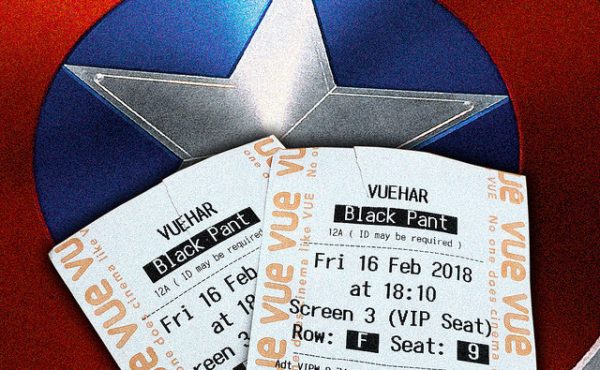 After viewing the new Black Panther movie, I couldn’t wait to get the action figures. I must not have been the only person with that thought, because when I went to a store later that day, there were only two figures to be found. It made me think about my action figure history.

According to Statista.com, 1.44 billion dollars were spent on action figures, accessories, and role-play toys in the United States in 2016. I have Star Wars fanatic friends who buy and sell memorabilia like commodities traders — but in 2016, I bought only one action figure, a figure of Firefly’s Zoë Washburne that I found in a clearance bin at Barnes & Noble. (Yay Browncoats!)

Still, I’m not a newbie to the action figure collecting game. Years ago, I had a collection of Teenage Mutant Ninja Turtles. Besides the classic turtle figures of Donatello, Leonardo, Raphael, and (my favorite) Michaelangelo, I had the “Rock ‘N Rollin’ Turtles” set. As soon as I bought them, I opened the packages so I could display the Turtles throughout my apartment. It never crossed my mind to preserve them in their original packaging. TMNT were to be enjoyed! Not only did I have the figures, I had a lunch box, wastebasket, watch, socks, and even a 13-inch Giant Turtle Michaelangelo.

As a lifelong Trekkie, I loved Mr. Spock. I got a small Spock figure, opened up the package and placed it on my desk. These days, I have a figure of Guinan, Whoopi Goldberg’s character from Star Trek: The Next Generation, next to the tiny model of the Enterprise that I got at the Air and Space Museum in Washington, DC. But after the great Sojourner debacle of 1997, I learned that collectibles were best kept in the box. (After searching throughout the Sacramento area to find a store that still had the Hot Wheels model of the Mars Pathfinder and its enclosed Sojourner rover, I opened the box when the spacecraft landed on Mars on July 4, 1997. Soon after that, I lost most of the pieces. They may or may not be in a box somewhere.)

The reason that so much money is spent on action figures is because they are usually resold at prices higher than the original selling price, especially at conventions and collector events. Besides Spock and Guinan, I didn’t have any other Star Trek figures — but when I went to a one-day collector fair, I came home with a collection. They didn’t have the one figure that I sought above all other, Lt. Uhura, but I got some nice ones from other shows and movies in the franchise. I didn’t open them. Even though I preferred the 5-inch figures, I had to get the 12-inch of Captain Sisko. That figure was so impressive that I invested in some other large figures, even though they cost more. For $30, I got a twelve-inch figure of Andromeda’s Tyr Anasazi at Toys ‘R’ Us. The closing sale at Tower Books landed me Captain Picard as Locutus of Borg. On eBay, I got Xena and Gabrielle, dressed their Warlord finery. In 2007, I finally got a rare 5-inch Uhura figure at the Las Vegas Star Trek Convention for $29.

But other than Zoë, I haven’t had much recent interest in action figures until Black Panther. The inspiring and heroic female characters of Nakia, Shuri, and (my favorite) Okoye caused me to look around in the toy section of Target, an area that I usually try to avoid. I found the Shuri character at a store near the theater on Saturday evening. On Sunday, I found a figure of Nakia, but there was no Okoye. When I got home and looked at the box, I discovered that I was supposed to “build” an Okoye figure. I had to buy two other figures from the series and two other figures from the Marvel line to get the pieces to put together an Okoye figure. Is this how it is done in the action figure world these days — buy one figure and get 1/5 of another? The Nakia package had Okoye’s torso, but I would have to spend at least $15 each on four more figures to get the head, arms, left leg and right leg. I didn’t even know who Sub-Mariner was, so why did I have to buy his action figure to get Okoye’s arms? Building Okoye would require opening the boxes, so if I wanted to have pristine packaged figures, I would have to buy an additional set. I hoped that the cast was getting some of this revenue.

So I went smaller: for $14.99 on the Disney Store website, I got the Disney Marvel Black Panther Avengers Figurine Set. It contained all five main characters and a rhinoceros, though the figurines are tiny — barely 4 inches high. I will be building a 6-inch Okoye when I can afford it.

One day, I hope to have a curio cabinet where I can display all of my action figures, big and small, even the Heroes in a Half Shell. Until then, I will just add my contribution to the billions that will be spent. As Izetta Nicole wrote for Black Nerd Problems: “Somebody tell me where to find the nearest Bank of Wakanda. I need a loan. Every single Black Panther action figure has got to be mine. That piggy bank is about to get smashed.”

1. We Did Good, Billfold
2. Question Wednesday
3. What I Learned From Five Years of Writing and Editing for The Billfold
4. How a Program Assistant Dealing With a New Paycheck System Does Money
5. Classic Billfold: What I Wanted From My Move to Portland and What I Got
black panthercollectionsfandomshopping