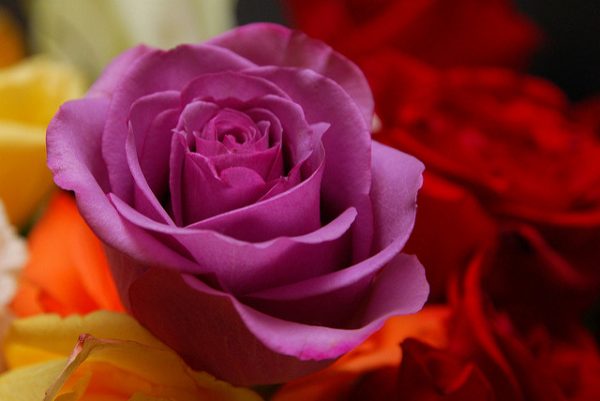 It’s not that I don’t like flowers. I really like flowers! I have actually caught myself SMILING AT FLOWERS while walking alone on a sidewalk. They’re beautiful. Brightly colored. They reach up and out with their lovely petals and faces and try to greet you. They actively try to inject joy into your day, just by being. Still — I’d rather have food. I would always rather have food.

Which is what brought me to my recent money-making scheme.

I needed more money for food. Valentine’s Day was coming up. And, even though I would not welcome a flower delivery on Valentine’s Day, I know that other people do. Many people. So many people, in fact, that the local flower store needed 37 delivery drivers last Wednesday alone.

I decided that I should be one of them.

The Craigslist ad stated that each delivery would be paid at a rate of $4.50, and that each driver would be guaranteed no fewer than 20 deliveries. Wow. $90 for a joyride, I thought to myself. I imagined scenario after scenario in which I would walk up to a door to greet a woman whose face would light up at the sight of me. (I was presumptuous, assuming all of the recipients would be women. But I was also right. 19 out of 20, to be exact.)

What I really wanted was to stand up close to the thing — the clichéd commercialism of romance that we, as a society, collectively turn to, year after year after year. I mean, honestly, you’d think that it would die out at some point. Don’t we realize that love is built and made from day to day to day; that it doesn’t hinge upon a time span of twenty-four hours in the middle of February?

At the pre-delivery meeting, the guy in charge informed us that we were really making a steal. His best drivers could do the run in about two hours, he told us. If you divided $90 by two hours, he said, you were making $45 an hour. Hot shit! I practically high-fived myself. That’s probably what lawyers make!

The next morning, I showed up at my scheduled pick-up time and waited for my car to get filled with flowers. I walked through the warehouse, teeming with workers blowing up balloons, arranging bouquets, and verifying addresses. There were a couple doughnuts that looked, at 9:30 in the morning, like they had been made at 9:30 the previous morning. (No thanks.) I waited in silence. Then a long-haired worker sat down, pulled out his guitar from under the card table, and began strumming. I wanted to laugh, but I was too busy imagining myself in a movie. This day was going to be great.

I waited an hour for them to get my car loaded. It was a busy day and things got behind. Then I headed out, armed with my delivery sheet, and waited for the people to bestow love upon me as I asked for their signature.

Fast forward six hours later. That’s right. It took me six hours to deliver the twenty bouquets. Only one recipient – the singular male! – tipped me.

And, while nobody disliked me, I didn’t really get to see a lot of smiling faces. Maybe like five? I gave most of the arrangements to receptionists or security guards manning front desks. I was stranded more than once in the lobby of a highly-secured apartment building, unable to take my delivery to the person whose name I held in my hand, as elevators and staircases were locked.

The flower shop stated that they randomly assigned delivery zones to the drivers, but I still assumed that they would read the asterisk I’d put next to my name explaining that I’d moved to the city just six weeks ago and didn’t know much about parking here. They either didn’t see the asterisk or they just didn’t care. I was assigned the downtown area, which meant paying for parking every ten minutes or parking illegally, throwing my hazards on, and hoping that I didn’t get ticketed. (A parking ticket would obviously further reduce my earnings. I didn’t get one, thank god.)

“If you do really well,” one of the managers at the store told me when I was heading out that morning, “we ask you back for other holidays.”

They aren’t going to ask me back. Six hours is not an impressive delivery time, no matter what. Still, I’m really glad I did it. I needed the money and I wanted to know what it felt like. But I think if I decide to try my hand at delivery again, I’ll go with pizza next time. Everyone loves pizza. Also, a pizza deliverywoman once told me that the key to large tips was quite simple. Leave your coat in the car. When the person ordering the pizza opens the door and sees you shivering, they will feel bad for you, invite you into their home while they get their money ready, and then tip the shit out of you, because they feel so bad that you are cold and that they are a) already warm and b) getting ready to eat delicious, hot pizza. It’s a win-win, she told me. I might take a chance on it.

Kelly Green is a writer living in Wisconsin. She loves dogs easily, humans with some effort. She can be found at kellygrain.wordpress.com and on Twitter @kellygreeeeeen. (That’s six e’s, because her name is anything but unique.)

1. We Did Good, Billfold
2. Question Wednesday
3. What I Learned From Five Years of Writing and Editing for The Billfold
4. How a Program Assistant Dealing With a New Paycheck System Does Money
5. Classic Billfold: What I Wanted From My Move to Portland and What I Got
deliveryholidaysjobsside hustlesthings that don't actually take two hoursvalentines-day