How I Got This Job: Full-Time Substitute Teacher 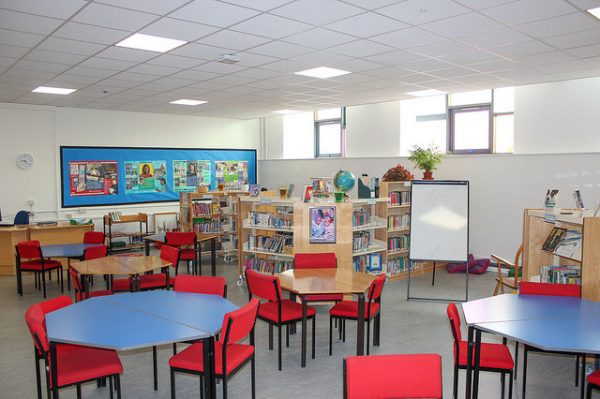 It must have been 18 years ago when I scribbled the words “Ms. Wilson’s Class” on a dry-erase board for the first time. I was seven years old, and about to teach my neighborhood friend (who was homeschooled, which is why she had dry-erase boards at her house) how to solve subtraction problems. Like a control freak, I made her raise her hand to answer questions even though it was just the two of us and her stuffed animals in the makeshift classroom. I scribbled stars on all the math problems on the board. Of all the great ways to play pretend, playing school was always my favorite.

Now, it’s 2017, and I’ve written “Ms. Wilson” on the whiteboards of countless classrooms in my city. I am a full-time substitute teacher, which means every day I get to be a chameleon in the education world. One morning I might read If You Give a Mouse a Cookie to 1st graders; the next day, I’ll teach 10th graders how to factor trinomials. In other words, no two days are ever the same.

That’s my favorite part of my job. I thrive off the unpredictability because I’m constantly challenged to learn something new. The old stereotype that substitute teachers are simply babysitters who lay back and throw on a DVD while chaos ensues around them is pretty outdated. Given the number of teacher shortages throughout my state (and the country), many substitute teachers work by filling in those job vacancies until someone with a credential is hired permanently. Usually, this means the sub becomes responsible for creating lesson plans, grading students, and enforcing rules like any other teacher would in their own classroom.

Of course, this isn’t how it’s always been. With the exception of the pretend school I invented at age 7, I had little interest in pursuing education for a career. In college, I studied Film and Media, where I dreamed of writing television scripts and working on the set of major productions. It wasn’t until I committed several months of my life to two internships at independent film studios that I realized I didn’t want to work in production at all. Being behind the scenes didn’t excite me as I thought it would, and I knew that I wasn’t going to be happy continuing with this path.  Although I wasn’t completely certain about what my next move would be, I knew I needed a change.

After quitting my internship, I abruptly moved from southern California to San Francisco, determined to surround myself with other ambitious people. I immediately took up multiple food industry jobs to make ends meet. My work day totaled 14 hours, and in those rare free moments I tried my best to stay creative and write. But when the bills piled up exponentially—and inversely with the amount of sleep I got every night—this became a less common practice.

I wanted to make enough money to keep the lights on, but also work semi-regular hours (and not 4:30 a.m. shifts) so I could focus on my personal health and writing again. Eventually, I moved back to my hometown where the rent was cheaper, but I was back at square one when it came to my career. Two of my family members who worked as elementary school teachers suggested I become a sub. Initially, I protested, given my lack of interest and the stereotype that substitute teachers are like Jack Black’s character in School of Rock. But I needed the money, and I knew the job was a great way to help teachers out even if I didn’t want to become one myself.

What was supposed to be a very short side gig has turned into one of my primary means of income. I’ve been substituting (also called “guest teaching”) in the same district for a little over a year now, and have zero regrets. When I first started working, I didn’t have the luxury of choosing where I could work. I took jobs for any subject and every single grade, which meant my work schedule (and commute for that matter) were initially chaotic. But I was new and desperate for money, so I took any and every job I could get.

I also took every opportunity to make a good impression. As with most jobs, networking is a huge part of a substitute’s success. I worked to create a memorable presence (by smiling warmly to school secretaries and simply being kind to people) and started building connections at the schools where I wanted to work. Now, I am fortunate to only work for one school, and receive steady job offers without having to worry about where my next gig is coming from.

Substitute teaching has also given me numerous freedoms that I didn’t have with other jobs. Whenever I have a bad day at work (which tends to be rare, thankfully), I can simply choose not to return to that class. I didn’t have that option when waitressing or working at a coffee shop. (If I had a terrible customer, especially a regular, I still had to show up to that same spot if I wanted to get paid.) As a substitute teacher, I have more freedom to say “no” to situations that are straight up dehumanizing or not conducive to a positive work environment. This is not to say some days as a sub aren’t stressful, but I have much higher tolerance for children misbehaving than entitled adults complaining about their latte temperature.

I’m often asked if I ever want a classroom of my own. The answer is always the same: This job is wonderful, I love working with the students, but it is a job, and it is not permanent. I hesitate to call this a side hustle because of my semi-regular schedule, but for me, I am a writer first, and everything else second.

As much as I enjoy being in the classroom, I know it is important to be true to myself and continue doing whatever it takes to make my own dreams happen—and right now, my flexible schedule gives me more freedom than I’d ever have if I had my own classroom.

Nevertheless, I believe teachers are the heroes of our nation, and feel honored to stand in their place on the days when they need a break. While this job isn’t for forever, I know it’s exactly what I need for now.

Savanna Swain-Wilson is a writer from northern California who loves brunch, free trials, and showing up early everywhere she goes. You can follow her on Twitter @savannabananaa.

1. We Did Good, Billfold
2. Question Wednesday
3. What I Learned From Five Years of Writing and Editing for The Billfold
4. How a Program Assistant Dealing With a New Paycheck System Does Money
5. Classic Billfold: What I Wanted From My Move to Portland and What I Got
careershow I got this jobjobssubstitute teachingteaching