“No” Was My Parents’ Best Advice 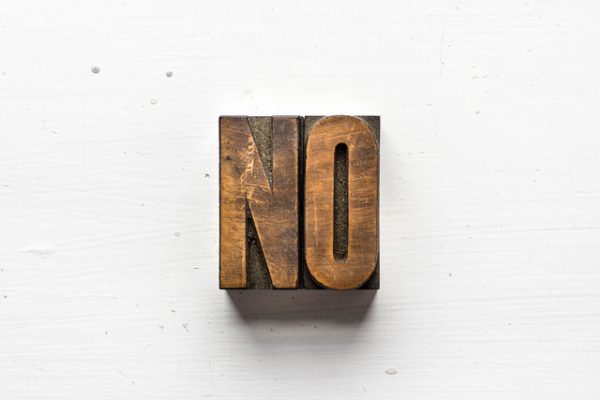 A few years ago, my parents got divorced.

Don’t worry. This isn’t going to be a tearjerker of a sob story about how my family was torn apart and flipped upside down as I was left to fend for myself in this dark, unforgiving world.

To be completely honest, it wasn’t that bad. Pretty clean break. My mom and dad had been married for a long time, bought a house, raised a bunch of kids and then eventually decided to call it quits. That’s the story.

The epilogue, however, was slightly more confusing.

After my parents’ separation, they changed. They started to act, well, weird. Not like keeping bizarre items in the downstairs freezer weird, and not like becoming a cat lady weird. They weren’t doing anything that caused immediate worry, but they were markedly different. They started doing something I’d never seen them do in my entire life.

They both decided to mark the end of almost twenty years of marriage by spending money. Lots and lots of money. Dad bought a car, a new wardrobe, and season tickets to his favorite hockey and football teams. Mom got herself a brand new Jeep and a motorcycle.

To be completely honest, it wasn’t the amount of money they were spending that surprised me. Really, who could blame them? Marriage is a business partnership in more ways than one, and since my parents had spent years discussing budgets and savings and costs and expenses with one another, it must have seemed like a good time to let all of that go.

What shocked me most was their proverbial spitting in the face of the advice they’d been giving me since I was a kid.

It was like they’d gotten together and said, “Hey. You know what would really mess him up? If we just did the complete opposite of what we’ve been telling him to do for two decades. Good idea? Cool. Break!”

The importance of hard work and financial independence has been singed into my brain since my childhood. When I was sixteen, per our long-standing agreement, I got my first job. It was like crossing the boundary into adulthood. It was made very clear to me that from that point forward I was on my own.

“If you need money, don’t ask us,” they said. “Because our answer will always be no.”

So I worked. I was a “doughnut artist” (I promise you, it’s a real thing) at Krispy Kreme. Then I worked at a sporting goods store, in a travel office, did data entry, and eventually settled into a career as a teacher.

Point is, I’ve always been employed in one way or another. I’ve worked from the age of sixteen until now, and at thirty years old I can’t remember a time I didn’t have a job.

I’d be lying if I said I didn’t resent the fact that my high school friends could just ask their parents for money whenever they needed something. I was more than annoyed when I found out their parents were covering their post-secondary costs, tuition and books included. I paid for my books by working, same as I paid for everything else.

On that note, shout out to my English Lit. diploma. Had I chosen another major, I probably would’ve had to actually do some studying.

Anyway, what did fourteen straight years of labor get me? Truthfully, quite a bit. Hindsight being 20/20, it was manageable. Even though “I have to work” could have been my catchphrase, it doesn’t mean I didn’t live.

Amongst my circle of friends, I was always the one who had money. In my late teens I developed a poker obsession—I absolutely refuse to use the work “addiction”—and I was fairly social, so even if I spent my bi-weekly paycheck the minute it entered my bank account, I never really had to worry about much money-wise. Not bad.

I put myself through five years of university—could have done it in four, but who’s counting?—paying my full tuition at the end of August with the money I’d saved up over the previous year. No loans, no financial aid, nothing. Sure, my bank account went from full-to-zero with one click of the mouse, but I didn’t have to carry the burden of student loans into adulthood. Great.

These days, I would consider myself to be money-obsessed. I know exactly how much cash is in all of my accounts. I know how much will be spent today, this week, this month and this year. I know when it all comes out and where it’s going. Not a penny goes unnoticed. I do everything I can to make a few bucks here and there, working side jobs and buying and selling items online just to make a small profit.

Sometimes my wife thinks I obsess over money a little too much, but to me, it’s kind of like a game. You start with a certain amount and try and take from other people until you have more than everyone else. Feels like I’ve playing that game for a while now.

Even though I sometimes wished that my parents would help me out financially the way I saw other parents helping my peers, I’m glad that my parents weren’t afraid to let me fend for myself in college and in adulthood—because they knew I’d be better off in the long run. They threw me into the water without a life vest and weren’t going to save me unless they thought I was drowning. (It’s an apt metaphor to employ; at thirty years old, I can’t actually swim. That’s one thing my parents decided not to teach me.)

Back to the divorce. Looking back on it now, I realize that by throwing caution to the wind and making a bunch of extravagant purchases, my mother and father weren’t reneging on the lessons they’d taught me when I was a kid.  They never sat on their proscenium and said, “do as we do.” They never actually told me how to spend my money. They let me figure that part out by myself.

My parents never told me not to gamble. They didn’t implore me to stay in and not to go out. They didn’t even tell me to work as hard as I did. All they told me was that I should never come to them if I needed money because they weren’t going to give it to me.

They taught me everything I needed to know about financial responsibility simply by saying “no.”

1. We Did Good, Billfold
2. Question Wednesday
3. What I Learned From Five Years of Writing and Editing for The Billfold
4. How a Program Assistant Dealing With a New Paycheck System Does Money
5. Classic Billfold: What I Wanted From My Move to Portland and What I Got
financial-independencelife-lessonsparentsparents month