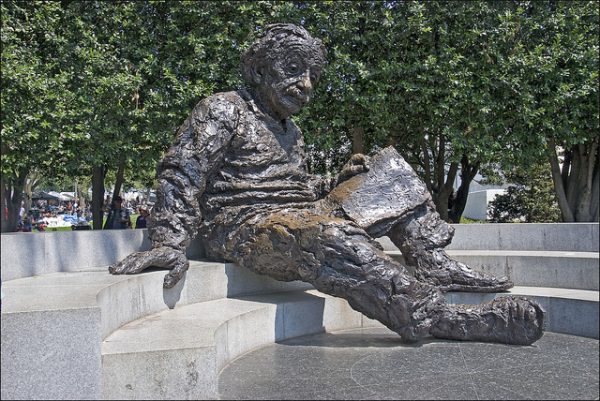 Let’s end the week with one more story about money and happiness, courtesy of the Washington Post:

In November 1922, Einstein was traveling from Europe to Japan for a lecture series for which he was paid 2,000 pounds by his Japanese publisher and hosts, according to Walter Isaacson’s biography, “Einstein: His Life and Universe.” During the journey, the 43-year-old learned he’d been awarded his field’s highest prize: the Nobel Prize in physics.

So Einstein arrives in Japan and goes to his hotel room to process the news. A messenger arrives with a delivery, and it’s a little unclear whether the messenger refused a tip or whether Einstein was short on cash, but we do know that Einstein ends up giving the messenger two handwritten notes, with the advice that they’ll be worth a lot of money someday.

Those autographed notes, in which Einstein offered his thoughts on how to live a happy and fulfilling life, sold at a Jerusalem auction house Tuesday for a combined $1.8 million.

One note translates as “A calm and modest life brings more happiness than the pursuit of success combined with constant restlessness.”

1. We Did Good, Billfold
2. Question Wednesday
3. What I Learned From Five Years of Writing and Editing for The Billfold
4. How a Program Assistant Dealing With a New Paycheck System Does Money
5. Classic Billfold: What I Wanted From My Move to Portland and What I Got
einsteinhappinesstipping culturetips