The Billfold
This Week in Sharing 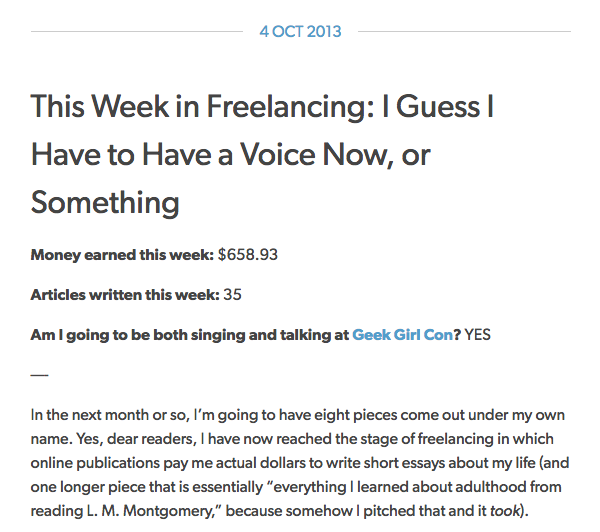 Now that it’s the first day of fall—and, coincidentally, a Friday—I’m going to share something that I did this summer that, as far as I can tell, only one person noticed:

I stopped posting my weekly income to Tumblr.

This is something I’d been doing every Friday since July 2012. I stopped, almost exactly five years later, because… well, because it didn’t seem like the right thing to share anymore.

It isn’t that I’m hesitant to share my income. I do my monthly income roundup on The Billfold and a quarterly income check-in on The Write Life, and if you ask me how much I made this week, I would be more than happy to share that number. (I completed $1,200 worth of work that’ll pay out next month, and had a $125 paycheck hit my bank account.)

It’s more like it felt inappropriate to share how much I was making on Tumblr, now that I was earning enough of it that I no longer appeared to be struggling in my career. I was making more than a lot of people, and I felt like I was flaunting it.

Especially, you know, the way social media has gone since (checks calendar) November 2016. There are a lot of people right now who are struggling or worried or wondering how they’re going to pay for things, myself included, and it didn’t feel right to drop my “had a great week, y’all, earned $$$$” updates in the middle of those conversations.

When I started “This Week in Freelancing,” it was actually called “This Week in Independent Musicianry,” because I wanted to share how many shows I was playing and how little money I was actually making. (In the first column, I played two shows and two open mics—which is to say I performed four out of seven days—and made $141.)

You can go back and read all of those columns and watch as my writing income slowly outpaces my music income. In October 2013, I start calling the update “This Week in Freelancing.”

And then, somewhere around the end of 2016, I start running out of things to say. By that point I have a stable client base and a steady income stream, even if the cashflow is a little wonky. Every week I share how much income I’ve earned and how many paychecks have hit my bank account, and I start to feel more and more embarrassed that I’m still doing this.

I started writing “This Week in Self-Publishing” in January 2017, which means that for five months, my social media followers were getting two weekly financial updates from me. The self-publishing column felt more like the original indie musicianry column, in that I was sharing what it actually cost to publish and promote a book (spoiler alert: I’ve spent $4,820.71 so far) and acknowledging all of the ways I was falling short of my own expectations while simultaneously getting these brief-but-beautiful moments of success.

It was much more interesting than “This Week in Freelancing,” both for myself and for the readers.

The other part is, of course, because “This Week in Self-Publishing” is a growth narrative.

In the early years of “This Week in Freelancing,” I made it my goal to earn more money each week than I had earned in the previous week. I didn’t achieve that goal every week, but I achieved it a lot more than I didn’t, and part of that was because I had made this public commitment to sharing my income online.

I’m not exactly doing the same thing with “This Week in Self-Publishing,” because earning passive income from book sales doesn’t work in quite the same way; I can buy advertising or do readings at bookstores, but those events are usually spread further apart, in part because they cost me money. (When I was working on growing my freelance career week over week, I tried to send out at least one new pitch every day. I can’t afford a new ad campaign every day. I can’t even afford to run an old ad campaign every day.)

But I feel like I’m in the same place, in terms of writing fiction, as I was with freelancing back in 2013. I’m building something, which means I have something new to share every week.

This isn’t to say that my freelance career isn’t still growing. (You’ve seen me take on greater responsibilities at The Billfold, for starters.) But the way I think about both my career and my income is shifting. It’s not just about getting more cash; it’s about doing good work with good people.

I also no longer think about “earning more” on a weekly scale because that metric doesn’t make sense with the kind of assignments and paychecks I’m currently getting. It’s more like… quarterly. Or “half-a-yearly.” I have a chart that shows me income and cashflow projections for the next several months, and those are the numbers that interest me.

So I stopped feeling like I needed to give these weekly updates.

And, as far as I can tell, only one person noticed—which is exactly what I hoped would happen.

1. We Did Good, Billfold
2. Question Wednesday
3. What I Learned From Five Years of Writing and Editing for The Billfold
4. How a Program Assistant Dealing With a New Paycheck System Does Money
5. Classic Billfold: What I Wanted From My Move to Portland and What I Got
careersfreelancingincome