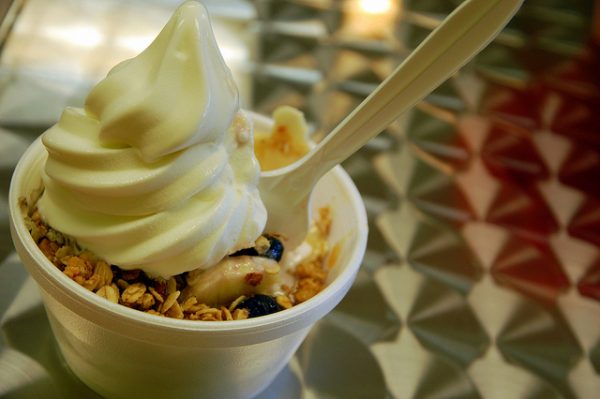 This Verge headline says it all: “Sigh, frozen yogurt pods are here.”

The Verge included a link to an unlisted promotional video by pod yogurt company Wim Yogurt, and even though I would never be so daring as to embed an unlisted video in my news post, I will be just daring enough to watch it and describe it to you: you have to open the pod, add your own milk to what looks like Kool-Aid powder, put the pod in the machine, and then wait ten minutes.

For a single serving of frozen yogurt.

Which already comes in pint-sized pods at the grocery store.

The Wim Yogurt machine costs $299 and comes with five free yogurt pods; additional yogurt pods cost between $3.00 and $3.80 each, depending on whether you buy them in bulk. Interestingly, you can also buy the machines in bulk—there is literally an option to buy ten of them at once—although you don’t seem to get any discount.

I’ll end with a quote from a Bloomberg interview with Wim Yogurt founder Bart Stein (formerly of Google and Stamped):

Stein got the idea for Wim on vacation at an Airbnb in the Catskills woods in the winter of 2014 with friends who included Wim co-founder Anthony Cafaro. The group wanted to make dessert but found nothing that would help them get the job done in their rented kitchen. “There was an appliance for everything from coffee, to waffles, to soda; we realized there was no appliance for frozen dessert,” recounted Stein.

IT’S AN ICE CREAM MAKER. IT ALREADY EXISTS. SO DOES “POURING VARIOUS YOGURTS OR JUICES INTO AN ICE CUBE TRAY OR POPSICLE MOLD.” YOU CAN EVEN MAKE FROZEN YOGURT WITH TWO ZIPLOC BAGS.

To be fair, Bloomberg did mention the ice cream maker thing:

“I wasn’t aware there were ice cream makers, that’s how unuseful they are,” [Stein] said.

But the Wim Yogurt machine is sure to be useful and will never end up collecting dust on top of someone’s refrigerator.

1. We Did Good, Billfold
2. Question Wednesday
3. What I Learned From Five Years of Writing and Editing for The Billfold
4. How a Program Assistant Dealing With a New Paycheck System Does Money
5. Classic Billfold: What I Wanted From My Move to Portland and What I Got
didn't youtube remind the verge that you should think twice before sharing unlisted videos?I am so old that our family's first ice cream machine had a hand crank on the sidenow I'm wondering whether I've ever embedded an unlisted promotional video I've been working this site for years it could have happenedpodsremember when we didn't need a billion frozen yogurts because we already had the country's best yogurt