The Cost of My First Burning Man 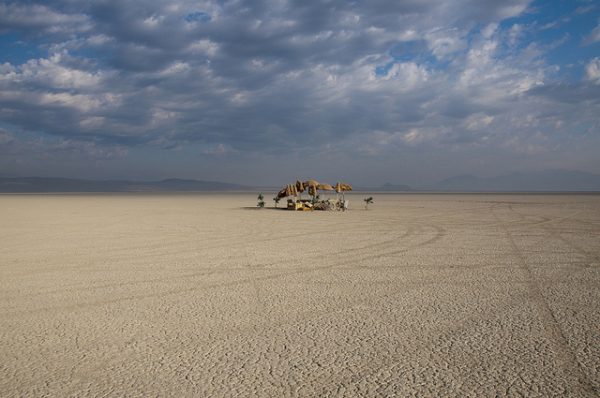 About six weeks ago, the woman whom I had just started dating and I agreed that it sounded fun to go to Burning Man for the first time. I’ve wanted to go for years, and this seemed like the right year to do it: I’m 29 and not exactly getting more fun with age, and I have a more flexible schedule right now than I will in future years.

Let’s start with the basics. I bought a ticket from a friend for the cost of the face value + fees for $492.

My girlfriend is driving most of our gear there, and I’ll split the cost of a vehicle pass with her, which comes to ~$40. Since our work and school schedules meant that we couldn’t drive together, I’ll take the Burner Express bus from downtown San Francisco to Black Rock City for the cost of $279.26 for a round-trip ticket with a bike add-on. Black Rock City is huge, so we borrowed bikes from friends to get around. Bikes can go missing or get beat up in the playa, so the general advice is to bring a cheap bike that you are willing to beat up.

You can either camp on your own or you can join an established theme camp. My girlfriend and I joined an LGBTQ+ camp that is organized by friends of friends. Each camp hosts several events, and our camp will host a flash tattoo party, a tiki-themed happy hour, and a sunrise breakfast. Our camp provides its 25ish members with food and water, first aid supplies, and a shower, so you won’t see those supplies on my list. I’m estimating $300 for camp dues, but won’t know the final number until after the burn.

There is no money at Burning Man, so participants can choose to gift items to others. Supporting the theme camp is considered our gift, and some people also bring gifts to give out. I had wanted to glue rhinestones to a stash of cheap sunglasses, but ran out of time.

I’m sure veteran Burners could debate over whether the items in this category are essential or not, but our camp gave us a recommended packing list, and I spent $199.24 on the items we didn’t already have. This included things like lights for our bikes so we can be seen at night, a tarp to go over our bedding to protect it from dust, and a cheap watch (since there’s no need to carry your phone).

I also bought a dolly + bungee cords once I realized I’d have to carry my storage bin from the Burner Express drop-off point to my campsite.

Again, we may have to agree to define “necessary” differently, but I decided I needed velvet-lined leggings (for warmth!), a backpack that can get beat up, and cotton underwear to survive for five days in the desert, among other items.

Everyone my age-ish in the Bay Area has a solid costume box, and I’m no exception, thanks to seven years of Bay to Breakers, Halloweens, and Barbary-Coast themed birthday bar crawls.

I was able to throw together some Burning Man-appropriate outfits from clothes I already had, including purple shiny shorts, lace crop tops, and a bright blue tutu. In my normal life, I rarely buy clothes, and when I do it tends to be to fill a specific gap. I think I’ve made two impulse clothing purchases over the last five or so years, and they both came in handy for this trip: a fake leopard fur coat and a black crop top that is more bondage-inspired than I initially realized.

That said, I bought a few more items to round out my planned outfits. My favorite purchases include an ombre wig and a pair of neon green go-go boots.

When I imagine myself at Burning Man, I see myself in black motorcycle boots and a giant checkered scarf. I bought cute versions of both, and am crossing my fingers that both will hold up well enough to be wearable after the burn.

When it comes to beauty services, I’m a strong believer in investing more upfront for services that will last longer. I decided it was worth it to spring for a shellac manicure, airbrush spray tan, and more waxing than is typical for me. I didn’t include the cost of eyelash extensions here, since I get those whether or not I’m at Burning Man.

There are always those miscellaneous costs you forget to account for, right? This section includes things like:

I would estimate that I spent 30 hours researching what to bring, coordinating with my lady, organizing Amazon orders, and packing. I would guess that my girlfriend spent a comparable amount of time as well.

Borrowed from friends or Buy Nothing Group: $0

Luckily, there were a handful of things that we already owned, were able to borrow from friends, or found on my neighborhood’s active Buy Nothing group. This includes a tent, air mattress, sleeping bags, plastic storage bins, and goggles.

Could I have done this more cheaply?

Yes, absolutely. My trip would have been cheaper if I had been able to carpool with someone who had a vehicle pass. My travel didn’t line up with anyone’s in my camp, but I could have sought that out on an online forum. On the other hand, I’m an introvert, and having that chunk of time to stare out the window and not make conversation sounded worth the money.

I wanted to spend more time looking for free or low-cost supplies, but an unexpected death changed many of my plans. The loss hit me harder than I might have guessed it would, and there was a week that I had planned to spend finding what I needed on Buy Nothing that I instead spent in bed watching bad comedies on Hulu.

I also didn’t have much of an option to price shop or use coupons: I don’t have a car, so the time and effort of taking public transit and hauling boxes around would have outweighed the cost savings.

Finally, on the beauty front: I’m bi, and within the last year realized that I’m wired in a way that means that I’m happier dating women (I exclusively dated men before that). There’s been a lot of processing and adjusting, as you might expect, and I’ve been thinking lately about what parts of my appearance about me feeling like myself vs. me prepping for the male gaze? It turns out that everything I’ve been doing beauty-wise has been for myself. Going from dating design-oriented start-up dudes to low-maintenance lesbians hasn’t been the money-saver that you might expect. However, I’m sure the majority of people would have felt just fine without investing as much in their appearance. I didn’t need to buy additional costumes, and I’m sure plenty of folks don’t and go on to have a great time on the playa.

I work in the nonprofit sector and live in one of the most expensive parts of the country; if you had told me this trip would set me back close to $2,200, I would not have agreed to go. However, I’m really grateful I didn’t have that information before I started planning the trip! I’m looking forward to making and looking at art, staying up all night dancing, and building and deepening relationships. I’m hopeful that additional costs will be minimal, I won’t get trapped in a dust storm, and that my motorcycle boots actually look cooler when caked in playa dust.

Hannah M. lives in Oakland, California, and has realized that there are cheaper ways to spend a week in the desert.

1. We Did Good, Billfold
2. Question Wednesday
3. What I Learned From Five Years of Writing and Editing for The Billfold
4. How a Program Assistant Dealing With a New Paycheck System Does Money
5. Classic Billfold: What I Wanted From My Move to Portland and What I Got
burning-mantravel