Should I Sell My Grandfather’s Stamp Collection? 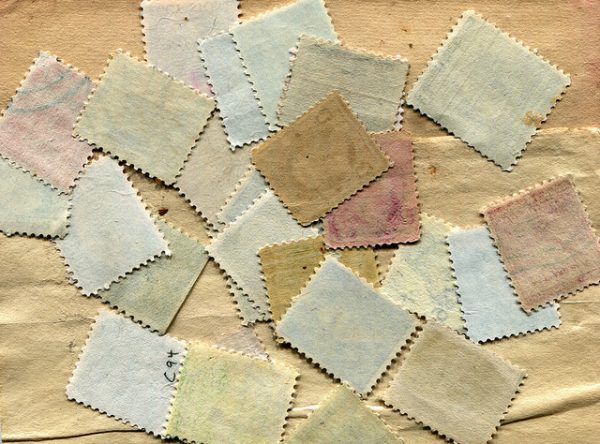 My grandfather’s stamp collection is in an old green album with a tattered spine; “Paragon Stamp Album” and a picture of a globe are embossed on the front. On the inside cover, my grandfather has written his name and March 8, 1937 (his twelfth birthday) and carefully marked his hometown, Timmins, on the philatelic (that is, stamp) map of the world. You can tell it’s old because fully one third of Africa is labelled “Sudan,” the Union of Soviet Socialist Republics still exists, and Newfoundland is labelled separately (they didn’t join Canada as a province until 1949).

The collection usually sits on a shelf, wedged between my own childhood stamp collection and binders full of old course notes. Not exactly gathering dust, but I look through it about as often as I do those old notes (reminder to self: recycle old course notes).

The question is: should I keep it—or should I sell it?

My wife and I have been watching a lot of Antiques Roadshow (the British version) recently. For two middle-class white academics, a Canadian (me) and a Brit (her), it’s an ideal combination of calm and interesting. The show has a predictable structure and beloved characters seldom die. Although the demographics of the show (white and over fifty) don’t match that of her old West London neighborhood (not white and of all ages), she likes to hear the familiar accents.

For those of you who have never seen the show, it is the ultimate encapsulation of a certain version of British Heritage. Each episode is held on the grounds of a different historic estate or National Trust property. Fiona Bruce, the current host, informs us of some of the history of the location (did Queen Elizabeth ever visit?) and then the fun begins. By “fun,” I mean watching experts tell civilians historical details about the objects they’ve brought for evaluation before revealing how valuable they are. Are they, perhaps, the finest example of a British-made clock this expert has ever seen? I’m told that in the American version of the show these valuations are sometimes severe disappointments, but in the British version they are always pleasant surprises.

For instance, in a recent episode an older white woman brought in a white jade container her godmother had used as a butter dish and which she had now inherited, knowing nothing about its provenance. The expert, bearded and full of knowledge, revealed that it was an eighteenth-century container, one of many made for the Emperor of China, which probably made its way to the U.K. after being looted from the Summer Palace by either the British or the French. Despite the fact that the container was missing a top, the expert estimated it was worth about thirty to fifty thousand pounds.

This is the point where, if you are playing an Antiques Roadshow drinking game, you hope the owner will say “Oh, but I could never sell it. It will stay in the family.”

Could I ever sell it? When I open my grandfather’s stamp album to browse the pages, I think not. My grandfather didn’t make the book; he just added the stamps. It’s not objectively useful. But my grandfather died about fifteen years ago, and I loved him and miss him.

Anthropologist Sasha Newell, in a study of hoarding in the United States, has written that maybe we store memories in objects; that we see them as “a kind of analog hard drive.” The stamp collection stores memories of the grandfather I knew—like the card full of loose stamps, with the note in his handwriting telling me that he hopes I find stamp collecting interesting and rewarding.

But the stamp collection also stores memories beyond my own, including both family and national histories.

My grandfather worked as a geologist for Inco—a Canadian mining company—and was the son of parents who immigrated to Canada from the U.K. For a number of years he was the director of exploration and traveled around the world, sending back letters with international stamps to my dad and aunts and uncles. When I ask my dad about the album, he says that, inspired by his father, he too briefly collected stamps and even attended a Saturday morning stamp club. (How was it? I ask. Boring, he replies.)

The stamps tell the family history of immigration and international mining exploration, but they also tell the larger story of empire that those stories are embedded in. In the Canada section of the collection, I find a two cent Xmas 1898 stamp: a map of the world with the British Empire colored red and the motto “We hold a Vaster Empire than has been” at the bottom.

My grandfather’s stamp album is full of former empires, growing empires, and many countries now independent. A five-cent stamp from the Belgian Congo holds the face of Sir Henry Morton Stanley. Korea (spelled Corea) is annexed to Japan. The section for Togo, which contains a pretty 1-cent stamp with palm trees and a beach, is headed by the complicated statement that it was “formerly a German colony, now divided into a British Mandate administered by the Gold Coast and a French Protectorate administered by Dahomey.” An envelope labelled “Valuable Stamps” contains a collection of stamps issued for the 1937 coronation of King George VI and Queen Elizabeth (the current Queen’s mother and father) for a vast array of territories: Basutoland, New Zealand, Newfoundland, Southern Rhodesia, Fiji, Hong Kong, and beyond. I could spend a whole year unpacking the history of empire in the twentieth century just through these stamps.

On the other hand, I’m almost certainly going to be underemployed for the fall (I teach on a sessional basis at the University of Toronto) and my wife and I are moving to Boston in January. We could use the money and, since I am a bit of a pack rat, probably the space. So I find the name of a stamp and memorabilia store in Toronto and take the album in. By this time, I’m not even sure I want to sell it, but I have gotten excited about the collection and am convinced it has some secret valuable stamps and must be worth, if not thirty to fifty thousand pounds, then at least one hundred or two hundred dollars. My hopes are high.

The stamp expert, a friendly white man with a short graying beard, flips through the album and I can already tell this is not going to be an Antiques Roadshow moment. He carefully turns the pages, commenting that the collection has some age to it. He takes his tweezers to try and see how the stamps are attached. Unfortunately for the valuation, they’re really glued on there—I’m not sure my grandfather was even using stamp hinges (an essential for modern collectors) for some of these stamps. Then he rifles through the envelopes full of stray stamps I brought along. He likes the first day of issue stamps from Nouvelle-Calédonie et Dépendances (where my grandfather was almost certainly investigating mineral deposits). Birds, he says, are popular, as people like to collect in themes, with birds and wildlife being popular in part because they’re the most widespread on stamps. The “valuable” envelope of coronation stamps attracts no special attention.

The result? He would be interested in buying the collection, and offers me his card. His initial offer: thirty-five to forty dollars.

Oh, but I could never sell it, I tell him. It will stay in the family.

Jessica Taylor did an anthropology PhD on the careers of romance novelists and once interviewed Lesley Gore. She currently teaches, writes, edits, and watches TV in Toronto, Canada.

1. We Did Good, Billfold
2. Question Wednesday
3. What I Learned From Five Years of Writing and Editing for The Billfold
4. How a Program Assistant Dealing With a New Paycheck System Does Money
5. Classic Billfold: What I Wanted From My Move to Portland and What I Got
familygrandparentsmoney and relationshipsstamps