The Billfold
Having Value 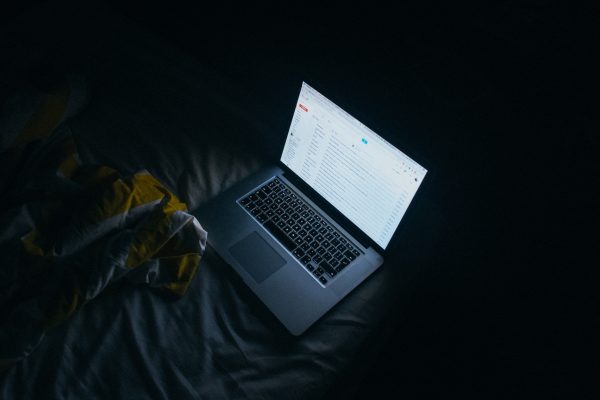 Photo by Jay Wennington on Unsplash.

On July 15th, a year and thirteen days after I accepted my boyfriend’s proposal of committed life-long partnership, I sat shaken in our bed after one fight too many, Facebook-messaging my friends to ask for money.

I cannot stress enough how much this goes against my upbringing. My mother taught me self-reliance in spades. I got my first job a few months shy of sixteen so I could pay for driver’s ed and take over payments on her car. I also became responsible for buying my school clothes that year, gleefully dropping $300 on whatever I wanted via personal check at the closest mall.

From there, my financial independence only grew. I squirreled away money the summer before college so I could afford my new (but ludicrously unfashionable) cell phone without having to get a job my freshman year. Sophomore year, I went back to working full-time so I could afford my first apartment. By the time I graduated college, I was making advance payments on my student loans, attempting to pay off an ill-advised credit card, and starting all over again with a loan for my newly-acquired-but-used Toyota. While my peers were just beginning to get frightened about paying for some things on their own (I was a scholarship student at a “new Ivy” school where most kids had credit cards in their parents’ names), I was the one doling out advice. The seasoned pro. The girl who knew how to hustle.

When I turned twenty-three, though, it started slipping. The MacBook Pro my father had bought me as a graduation present six years before had died, so I bought a PC off one of my friends, agreeing to pay him back as I could. I had never been financially beholden to someone else before, and the experience was uncomfortable. Until I paid him in full, I felt a tension between us whenever we got together. We both know you owe me, every look seemed to say. It didn’t matter what he actually thought in those moments. Until I was debt-free, there was a weight of guilt on me: I hadn’t been able to make do on my own and that was a personal failure.

I experienced something similar three years later, in a different context. It was Spring 2015. I was a few months into marriage and out of work on short-term disability. My husband, “Tom,” and I had recently moved into a loft apartment after our suburban house was seized by the bank post-foreclosure and we both carried multiple loans, credit card debt, and shaky checking account balances. My disability payments were a far cry from the biweekly paychecks we were used to, and I still hadn’t adjusted to needing to ask my husband to borrow his debit or credit card to pick up groceries or pay one of my bills. It was a medical necessity that was only supposed to last until I found the right medications, but I never got used to the idea that I couldn’t carry myself without help—even if it came from the man I had chosen to spend the rest of my life with.

But none of this was as jarring as what I experienced on July 15th and continued to experience in the days and weeks to come.

After speaking with my therapist, my friends and a few online counselors, I decided to look up signs of emotional and verbal abuse. I had begun to think that my relationship with “Christopher,” my partner of a year, was unhealthy at best and abusive at worst. Out of the 70+ examples I found online, twenty-five hit home. He did point out my past mistakes. He did accuse me of things that weren’t true. He did cross my boundaries and ignore my requests, especially when it came to how he behaved during fights. He’d yell or use an angry tone and badmouth people I loved. He made me feel as if I constantly had to confess to innocent things, like having a conversation with Tom regarding our still-pending divorce papers, because of his insecurity and distrust. But most of all, our interactions were making me question the future of my sanity and stability, and I couldn’t stand it any longer.

I needed to get out of Boston and into a better headspace, so I called a friend and asked if I could stay with him for a few days in Portland, Maine. He agreed and we made plans to meet at the transportation center late that evening. The only problem was paying for the $35 bus ticket. So I set my pride aside and sent a message to a select group of friends, including my PayPal and Venmo information, just in case:

Can I ask a favor? I need to get out of the city for a few days. I just realized my relationship is abusive and I need a break, but I don’t have the money for a bus ticket. I was wondering if I could borrow some (it’s $39) with the knowledge that I don’t know when I’ll be able to pay it back, but that I will eventually.

I wasn’t sure what to expect, but what I received was definitely more. Not only did many of my friends offer the $39, but one woman took the request (with my permission) to her Facebook group of self-employed women, many of whom threw money my way. That night, I received nearly $200 in donations, and had no idea how to react other than to say “thank you” as humbly as I could and purchase my ticket out of town.

It became even harder to process my emotions after I announced on Facebook that my partner and I had broken up — and, more importantly, why the relationship had ended. I wrote: 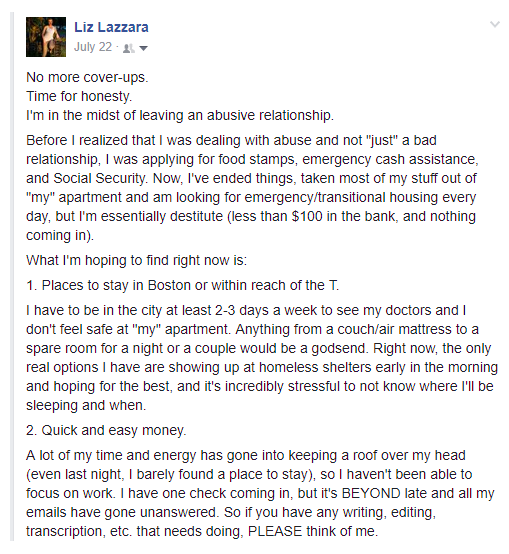 I had hoped that people would respond with offers of spare rooms, some links to writing jobs, and moral support. More than anything, I received Facebook messages offering financial help:

“Can I send you some money?”

“Find a decent Airbnb, send me the link, and I’ll grab a night for you.”

“I saw your post. Give me your PayPal and I’ll send you some cash. Nothing huge, but hopefully it’ll help.”

And then there were the text messages:

“Can I give you money towards a hotel? Do you need a ride somewhere? Do you need transportation money for a bus/train/plane to get to a relative or a friend? Please let me know if I can help in one of those ways. I want you to be safe.”

“Do you have a GoFundMe or something, Liz? It goes without saying we stand behind you. We’ll try to get a collection going.”

“Stay strong and if you ever find your way to Florida, you have a place here you can rest your head. Even if I’m a stranger to you, my home is open.”

It was overwhelming. A thousand dollars poured into my bank account, and I couldn’t say it wasn’t welcome. I needed it to pay for groceries, tickets back and forth to Boston (once I found that Portland was the only place I could stay until my care coordinator found me emergency housing, I had to take the bus roundtrip for appointments), and to make a last minute payment to my cell carrier so they wouldn’t interrupt my service. In truth, the money was gone almost as fast as it came. That’s how much I needed a life raft.

But living off donations only exacerbated what I had been feeling in the last weeks and months of my relationship: I wasn’t worthy.

All my life, accepting money (either as a loan or gift) made me feel weak. If I owed someone money, I paid it back as fast as I could—and if I couldn’t afford something, I preferred to go without. I alluded to my financial difficulties on Facebook in the hopes that people would suggest ways I could earn money myself. I didn’t want “pity money,” but because I needed it, I took it and I sat with my discomfort after the fact, trying to understand why I didn’t deserve something I would have readily given to someone else if the situation were reversed.

The answer was simpler than I anticipated: I had accepted “less than” as “good enough” my entire life. I had endured emotional trauma throughout my entire childhood and I grew up believing that I was the only one I could count on. Everyone else was inherently unreliable. That’s why I accepted two-and-a-half years of game-playing with my first high school boyfriend. That’s why I stayed in a relationship with my second long-term boyfriend, even after I learned he’d lied to get me to sleep with him. That’s why I picked my functional alcoholic husband off the floor night after night, and why I endured Christopher’s abuse: I didn’t think I was good enough for anything more.

I could say that after this realization, I made my peace with the money that was given to me, but that would be a lie. No one goes from trauma to self-love overnight. But I can say that I’m learning to look at each deposit as a sign that someone values me, loves me, and wants me to be safe. One day, I think I’ll believe it, too.

Liz Lazzara is an androgyne writer, editor, and activist specializing in mental health, addiction, and trauma. They have written online copy for rehab centers, and essays, narrative nonfiction, and journalism for multiple online and print publications. They are currently working on a manuscript about complex post-traumatic stress disorder and addiction, and they are affiliated with Active Minds, the Mental Health America Advocacy Network, the National Alliance on Mental Illness (NAMI), the National Association of Memoir Writers, the Nonfiction Authors Association, No Stigmas, and the One Love Foundation. Follow them on Twitter and find their entire body of work at LizLazzara.com.

1. We Did Good, Billfold
2. Question Wednesday
3. What I Learned From Five Years of Writing and Editing for The Billfold
4. How a Program Assistant Dealing With a New Paycheck System Does Money
5. Classic Billfold: What I Wanted From My Move to Portland and What I Got
abusefriendshipmoney and relationshipsnames have been changed