The Cost of Being a Bad Runner 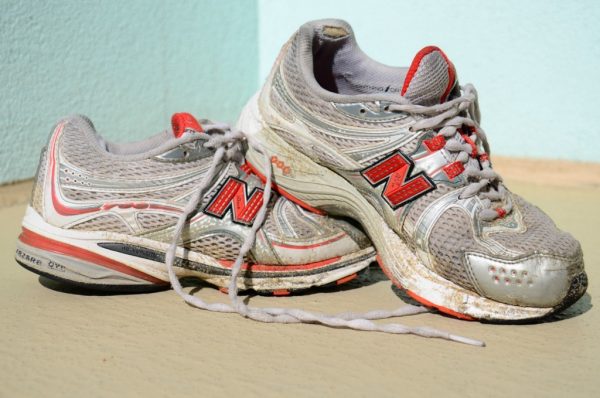 At the finish line of this year’s Airbnb Brooklyn Half Marathon, I limped along the Coney Island boardwalk, my legs radiating pain and my feet numb and cold as fish; I tried and failed to open a Gatorade, dropped my apple on the ground after one bite, and finally sat down on the MCU Park steps to wonder: why the fuck do I keep doing this?

Brooklyn was my third half, and my fourth race of ten miles or longer. It was also my slowest, and most expensive — the exact opposite of an inspirational fitness story. Like a lot of people, I started running after graduating from college and taking a full time desk job as a relatively inexpensive way to pretend the amount of beer I was drinking wasn’t destroying my body. I’d been a fairly active teen; I played soccer year-round, I danced, I even spent one gloriously undistinguished season as a long jumper on my high school track team. But after moving to New York City and discovering that the diner by my apartment would deliver mozzarella sticks to me at all hours of the night, I realized walking to and from the subway every day wasn’t going to cut it for physical activity.

I signed up for races because the treadmill is boring, and the idea of a hard deadline, a visible and potentially painful test of the past 3–6 months’ worth of training that only I could hold myself accountable for, appealed to me. Nothing motivates me more than the possibility of public humiliation and suffering. And let’s face it, training is a slog about 85 percent of the time, and the promise of a free t-shirt and a bagel and maybe even a medal at the end of a race made peeling myself out of bed before 5 a.m. and using upwards of three pre-race Port-a-Potties a little easier to handle.

But the costs, both overt and hidden, add up quickly. Here’s the breakdown of my Brooklyn Half costs:

There are also the tangential costs to getting and staying in shape, even when I’m not actively training. Does my gym membership ($60/month) count toward my running budget? The Spotify Premium subscription ($9.99/month) I maintain solely so I don’t have to listen to ads during long runs? The Garmin Forerunner 35 ($199.99) I’ve had in my cart on Amazon for months, because I can’t bear to spend that much money on a watch when my $25 stopwatch still works, even though the Garmin will tell me my pace and my heart rate and, I’m assuming, make me breakfast?

I considered, briefly, joining a training group or meeting with a running coach, because I thought I might respond better to someone besides myself yelling at me while I run, but New York Road Runners group training, with catchy alliterative names like Track Workout Wednesdays and Tempo Thursdays, can run up to $100 for six sessions. One-on-one meetings with a coach can be as much as $125 per session.

So, after the Brooklyn Half, I finally had to sit down and have a hard talk with myself. It’s one thing to devote time and energy and funds to starting a new fitness habit as a newbie who’s only other exercise is “walking to the bar.” But it’s another to slowly and steadily decline after five years’ worth of time and energy and funds. I had to decide: at what point was it too expensive to be a bad runner?

Recently, NPR ran a piece about a study claiming that American runners are getting slower en masse. The research isn’t conclusive; that is, we — the hobbyists and plebs, not the professionals — are definitely getting slower, across all race distances, but the reasons why are murky. The study’s authors floated the ever-present boogeyman of America’s obesity epidemic as a potential cause, but stopped short of claiming it definitively.

Why Are American Runners Getting Slower?

The first time I read the article, and then skimmed through the study, I broke out into a cold sweat. It was me — I was the American runner getting progressively slower the more races I ran. Me and my Pepperidge Farm Texas toasts in the freezer and my missed workouts and weekend long runs that end at brunch — I was the unhealthy slob clogging up running lanes that should have belonged to runners who could run in shorts for thirty minutes without their thighs chafing until they bled.

But then I thought: so what? Donald Trump is president; being good at something is no longer a requirement to do anything. If my stumpy legs and ambivalent training are dragging down American race averages, then I am truly sorry—but occasionally, when I run along the Hudson, past the Little Red Lighthouse and a toddler’s birthday barbecue and a volleyball tournament and the Riverside Park cherry blossoms and a goose that looks up at me and honks as I go by, I feel more alive, more present, than I do at any other part of my life. Sometime’s it’s fun to move this decaying meat sack at a slightly-faster-than-normal pace.

Two of my best friends are using the Couch to 5K app right now, including one friend who spent the past decade declaring that hell would freeze over before she ran for exercise. And why shouldn’t they? Why shouldn’t they experience the perverse joy of dragging themselves through Prospect Park and seeing a child holding a sign that says SPICEY’S IN THOSE BUSHES — RUN? (Every single sign at this year’s Brooklyn Half was politically themed, no exceptions.)

To my mind, the reason why Americans are getting slower on average is a good one: With more people interested in running to get and stay fit, there is an unavoidable drop in the level of training and preparedness. More people run, and the results are slower overall.

Runners are a notoriously welcoming bunch. Some of the nicest strangers I’ve ever met have been people who cheerfully ushered me into their running groups like I was the coolest person on earth and continued to hold a conversation with me even after it became clear that I lacked the breath power to form words, let alone sentences. If there’s anything I’ve learned from these jolly wackos—some who don’t even listen to music as they run, like wizards—it’s that they want as many people as possible to experience the joy of running. It’s not just a big tent: it’s an all-encompassing tent.

So I’ll keep running a race or three each year — just maybe not the biggest, shiniest, most expensive ones. I’ll keep buying new running shoes on sale, and maybe get up early enough on race day to take the subway instead of a Lyft. In the end, there are much worse things to throw my money at than physical activity and the occasional victorious Instagram picture.

Caitlin Keefe Moran is a project editor and writer in New York City. She tweets at @ckeefemoran and thinks you should bring her a milkshake.

1. We Did Good, Billfold
2. Question Wednesday
3. What I Learned From Five Years of Writing and Editing for The Billfold
4. How a Program Assistant Dealing With a New Paycheck System Does Money
5. Classic Billfold: What I Wanted From My Move to Portland and What I Got
fitnesshalfway-therehobbymoneyrunning