When All Your Hopes Fit in a Teapot 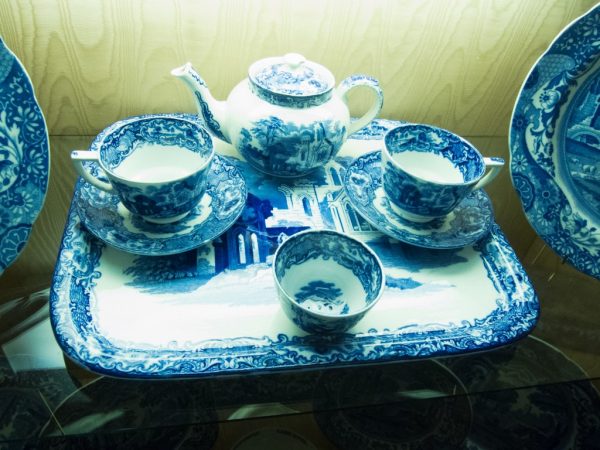 About a year ago I fell in love with a teapot. It was a smooth, white, chicken-size porcelain teapot with a ring of dimples around the lid and crowned with a modest finial. It sat in a display case in the window of a thrift store, amongst a dozen cups and saucers, above a threadbare couch, next to a rack of polyester ties.

The price was $40 for the pot, plus the cups and saucers. For what it was, not too high. And on the underside of the pot and of every gleaming cup and sparkling dish, glazed in a beautiful blue filagree, there was a crown set above two stylized initials — A and K — and beneath these the words “Kaiser — W Germany.{ Well they certainly aren’t making any more of these, I thought.

I wanted to buy it. But I also wanted to wait, because the week before, I had been evicted from my apartment in Oakland. Buying a teapot seemed inexcusably frivolous compared to scraping enough together for a down payment for something much more necessary.

Anyone even casually familiar with the Bay Area knows that the rental market here is as legendary as it is forbidding. All my free time was spent apartment hunting. I printed out a about a dozen copies of my credit report, plus bank statements for the past three months and my tax info from the previous year. I called work and asked for half-shifts for the next two weeks, and also asked for a written statement vouching that I had a steady source of income. And while I was at it, asked for a letter of recommendation, just in case.

I prepared interview packets and met with property managers, homeowners with a room to rent, housing co-ops, students looking for roommates. I even checked out an off campus dormitory for UC Berkeley, despite being well beyond the age of the average freshman. Competing in the real estate market against nineteen year-olds, I realized I hadn’t taken any of my college application packets nearly as seriously. But then there had been a lot less at stake.

It was exhausting, like taking on another job. Unpaid. My belongings were either all in boxes or in my backpack. My mailing address was someone’s sofa. What the hell did I want with a teapot?

As I went around doing interviews, passing out application packets, and submitting myself to background checks, I found myself again and again thinking about that tea set. It represented something more than just casual caffeination. It represented maturity, serenity, stability. A very adult capacity to protect and defend something ageless yet vulnerable. By the spout, there was a slight chip which had been somewhat amateurishly repaired by a previous owner. This, to my thinking, only made it more valuable.

Someone had cared for this pot enough to fix it, and to fix it themselves, because they either didn’t have the money or didn’t have the trust to leave it with a professional. I wanted to twine my history with the histories of the people who had loved and laid hands to this beautiful thing. In my fantasies, I sat in a kitchen exchanging casual wit with a minor European monarch, serving Earl Grey poured from that West German teapot into one of those West German cups.

The teapot was the beginning of a promise. It was a motivator to get myself on the giving side of hospitality and to not always be on the receiving end. If I just get that teapot, I thought, then I can also get a table, and some chairs, and a roof, and running water, and the Prince of Denmark, and then I will have everything I need.

That teapot had survived the Iron Curtain. Granted, the safer side of it. But still. I wanted that resilience. I wanted proof of my ability to self defend. I wanted that teapot the way a robin wants to fly through glass.

So I got that tea pot. And all its little saucers. I wrapped them in newspaper, boxed them up, and brought them all back with me to the sofa. I didn’t tell anyone. It was ridiculous to spend $40 on a teapot when I didn’t even have a place of my own. But sometimes a purchase is about something far more than itself. As a girl, my grandmother made a hope chest for her one-day family. I bought a teapot for my one-day apartment — which I found, at last, in Berkeley, after three months of searching that had felt like three years.

Most mornings now I pour tea from that tea pot into one of the cups as I sit — in a chair! — at a table under a roof in a kitchen that has running water. The Prince of Denmark has yet to put in an appearance but the invitation remains open. (Frederik, if you’re reading this, call me!)

And then, last week I dropped one of the cups. As it slipped to the tile it seemed not so much to fall as drift slowly like snow. As I cringed, prepared for the breaking of porcelain, the little explosion of shards, I felt that I was about to lose something small but incredibly significant.

The cup bounced. It gave a little silvery ping! and rolled to a stop against its handle. I picked it up and washed it under the tap. Not a chip or a crack in it. Even the Iron Curtain shattered when it fell. Yet my tea set, and my dignity, both remain intact.

1. We Did Good, Billfold
2. Question Wednesday
3. What I Learned From Five Years of Writing and Editing for The Billfold
4. How a Program Assistant Dealing With a New Paycheck System Does Money
5. Classic Billfold: What I Wanted From My Move to Portland and What I Got
impulse buyslife-lessonsrentingshopping